We Were There, Vol. 4
By Yuki Obata
Published by Viz Media 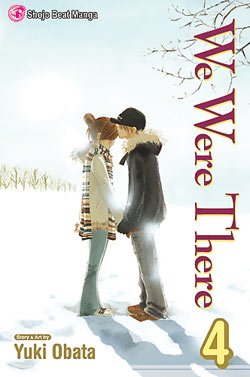 “Why do people make promises they can’t keep?”

After hastily announcing that she was ready to have sex with Yano at the end of volume three, this volume opens with Nana in a state of abject terror as she’s faced with actually doing the deed. Reassured by Yano’s unexpected sweetness, she shakily plunges in only to be interrupted by the return of Yano’s mom before anything can really happen. Though this is somewhat of a relief for Nana, Yano immediately begins trying to raise money for a love hotel which Nana manages to stall by suggesting they save up for something nicer. The volume’s charmingly awkward beginning becomes more troubled in later chapters when Nana finally persuades Yano to tell her the truth about his association with his ex-girlfriend’s sister, Yamamoto. Yano’s past with Yamamoto, however, is not nearly as difficult for Nana as the discovery of his lingering feelings for his deceased ex, revealed in a stunningly poignant scene at the end of the volume.

Just as in volume two when Obata was able to perfectly capture the moment of a couple’s first kiss, here she flawlessly portrays both the flustered excitement-mixed-with-regret of first-time sex (thwarted or not) and on a darker note, that very particular nauseating pain unique to the realization that the one you love is in love with someone else. The whole volume is filled with the same delicate honesty that has characterized the series as a whole, but its final chapter on the beach when Nana, believing she is giving Yano a chance to finally let out his anger at his ex-girlfriend, implores him to tell her whatever it is he most wishes he could say, the result is a moment of pure, true emotion rarely achieved in fiction of any kind. What makes it feel so real is Nana’s response–pulling quickly away with a tearful calm that is only possible in exactly such moments, when there is no other option but a hasty retreat from a reality that is just too painful to bear.

What makes this so real, too, is that there is no villain in this story. Neither Yano or Nana is trying to do the other wrong. Both are acting on the only truths they have–carefully treading the thin, thin line between love and self-protection–vaguely aware that a single misstep could plunge them into the abyss. When I reviewed volume two of this series, I mentioned that it was close to my teenaged heart, but these special horrors are not particular to any age. The terrifying vulnerability of love is ongoing and if it wasn’t so uniquely wonderful as well, it’s hard to imagine anyone would risk it at all.

I want to meet you over and over again. And I want you to make a fool of me over and over again. I’ll keep repairing what you break until it wears me out. I’ll stay with you until it breaks me. I’ll be the clown, the idiot, the dog… I’m willing to throw away my pride and composure. I don’t need anything… only… tell me that you love me.

These feelings–this painful honesty that is the one bit of chaos we humans can’t tame is what We Were There is all about, and it manages to express all of it without ever resorting to melodrama or syrupy romance, always maintaining the same emotional sincerity and restrained, wistful quality it has possessed from the beginning.

If this seems like an overly-emotional review, it is, and I can’t pretend otherwise. I’m letting it stand, however, in an attempt to illustrate the deeply personal response this manga is able to evoke. I’m sure my reaction is more extreme than some readers would experience, but I don’t think it’s unique, and I think it says more about the power of Obata’s storytelling than anything else. I may not be able to promise you an evening of tears, but can promise unaffected storytelling and real emotional resonance wrapped up with a delicately beautiful bow.