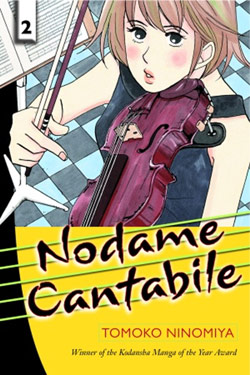 This volume opens with the introduction of new character Masumi Okuyama, a timpani player with massive crush on Chiaki who sees Nodame as his rival. His initial attack against her consists of various childish pranks, like sending her an ominous chain letter and taping a sign that reads “IDIOT” on her back. Eventually, the two of them become engaged in a competition to see who can procure a Christmas Eve date with Chiaki–a challenge they both lose (or both win, depending on how you look at it). Also introduced in this volume is a new professor of conducting, Maestro Franz von Stresemann–a notorious skirt-chaser who takes photographs of the female students’ underwear, and who creepily pursues Nodame from the first moment he appears. He later forms his own personal orchestra made up mainly of colorful characters and pretty girls chosen without regard to their actual musical talent.

All that said, there is still plenty here to draw me into this series. Nodame is still quite a mystery in many ways and I’m looking forward to finding some hidden depth in her, as well as seeing where her raw talent and uninhibited personality take her as the story goes on. Having been a music major in a pretty intense program, so much of this manga resonates very strongly with me, especially Chiaki’s personal struggles with perfectionism and the endless roller-coaster of self-esteem all artists are doomed to ride–from arrogance to humility and back again, chapter to chapter. Also, Stresemann’s lesson to Chiaki about treating students with good humor and respect as a conductor in order to get the best work from them made me laugh outright in a very good way. I can think of some conductors I worked with in school who could have benefited greatly from that lesson, and none of them were students.

I really don’t want to make too much of the elements I found disappointing in this volume. This is still a very charming series with engaging characters who have great potential for growth, and the mangaka’s research has given the music school setting a very realistic feel. I look forward to reading more.