Good morning, folks! I’ve been on a bit of a crazy schedule, so I’m behind on answering comments to yesterday’s entry. I will work on doing so later tonight! Thanks for such a great response! In the meantime, here’s a quick review for today:

Her Majesty’s Dog, Vol. 1
By Mick Takeuchi
Published by Go!Comi 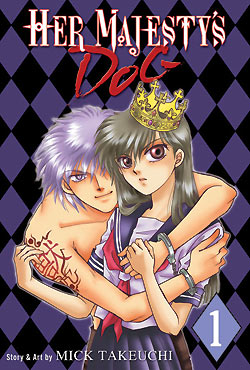 Amane Kamori is awkward, unpopular, hopeless with technology, and constantly in the company of her attractive and much-admired boyfriend, Hyoue, which is far beyond the understanding of her classmates. What none of them know is that Amane is actually a Manatsukai, gifted with the power to use names to control others, and Hyoue is her Koma-oni, or guardian demon, who watches over her in exchange for feeding off her life force. Amane left her small village to seek out a broader world, but the villagers aren’t letting her go so easily and they send one of their own to keep tabs on her–Amane’s cousin, Hiraka, who poses as a teacher at her school. Meanwhile, Hyoue has feelings for Amane that some consider unfit for a demon who is essentially Amane’s servant (or at best, pet). As Amane and Hyoue attempt to quell vengeful spirits around their neighborhood and school without having their true natures revealed, they also struggle with their lives as ordinary high school students who can never quite fit in.

This manga starts off on an interesting note by introducing the two main characters through the eyes of another–a schoolmate named Takako who unwittingly is haunting the school with the spirit of her own regret. Takako is an immediately engaging character who fortunately is not abandoned after her introductory chapter, as she becomes Amane’s first real friend. All of the main characters so far are intriguing and quite poignant, especially Hyoue who is obviously struggling with the feelings and desires that seem to have come along with his human disguise. While there is much potential for angst-filled romance here, so far Amane is much too clueless to really participate and it will be exciting to see where that goes.

While this first volume is somewhat scattered and unfocused, there is a lot of potential lurking throughout. The power of words as a supernatural device is something I’ve found intriguing since the early volumes of xxxHolic, and I look forward to seeing just how far this goes in Her Majesty’s Dog. And while stories of magically-induced servitude have irritated me in the past (Captive Hearts, anyone?) Hyoue’s lack of free will is much more nuanced than I’ve often seen and it ends up being one of the most intriguing points of the story. His devotion to Amane is genuine and unforced and in fact plays more part in his attempts at rebellion than anything else, which is refreshing in this type of scenario.

The chapter I found most moving (and painful) in this volume is one in which the angry spirit of a dog is possessing other dogs after having been sacrificed for revenge by his elderly owner to whom he had devoted his entire life. The spirit’s sense of hurt and betrayal is so deeply felt, it was honestly very difficult for me to read, especially while Amane is trying to help set the spirit free of its pain so it can move on. The volume as a whole is very uneven and though it feels like the mangaka has not yet figured out what kind of story she is writing, it is chapters like this that make me want to read more. Takeuchi’s art is fluid and expressive, offering more of a cohesive feel than the story itself at this point.

As the story’s cast of characters begins to come together, it is easy to see the potential but not necessarily the path of Her Majesty’s Dog. I look forward to seeing just what this manga turns out to be.