First, just a quick link to a review of mine over at Manga Recon’s Otaku Bookshelf column, for the second and third volumes of DMP’s The Guilty, a series of yaoi novels I had extremely mixed feelings about. And now, a quick review of something a bit more my style! 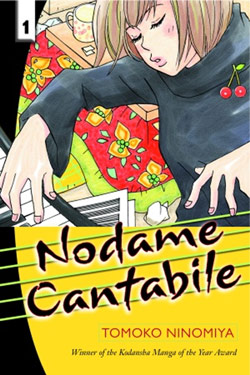 Shinichi Chiaki is an arrogant young music student and son of a famous pianist, who resents having to study in Japan rather than in Europe where all his real musical dreams reside. Frustrated with his piano teacher–the most prestigious in the school–he gets himself thrown out of the studio and ends up studying with the teacher who is known for taking on the school’s dregs. One of these students is Megumi Noda, aka Nodame, a very talented young pianist with poor music reading skills and no discipline. Living next door to each other in the same apartment building, the two of them start to form an unlikely bond. Chiaki cleans Nodame’s apartment (entirely out of frustration), cooks her meals, and works with her on the pieces she’s practicing, while Nodame gives Chiaki a taste of real spontaneity and inspiration, helping him to refocus his dreams.

This manga has been ongoing in Japan since 2001, and though it’s a shame I’ve only just picked it up now (thanks to the used section at my local comic shop!) I can see I have a great treat in store. These characters are so wonderfully odd and idiosyncratic, it is impossible not to fall immediately in love with them even when they are at their very worst, which is quite often. Nodame is charmingly simple and open, though she lacks awareness of her effect on others. Her childlike personality is delightful and rare, but it is hard not to feel embarrassed for her at times, especially when she is at her most thoughtless, such as in her ongoing habit of stealing a classmate’s lunches. Chiaki is horribly arrogant, ungrateful to his teachers, and unpleasant with his peers, but underneath his love of music shines like the glow of true love, giving him the unexpected capacity to be actually kind to someone like Nodame, which is not at all what you’d expect of him.

As the volume progresses, at least one other student comes into the picture, seemingly to join the main cast. He is a punky violinist who at first wants to quit classical music to focus on his rock band, but is eventually influenced by working with Chiaki and Nodame. Each of these characters is so fresh and charmingly flawed, I honestly can’t wait to see what is in store for them.

Another lovely element of this manga is the obvious research done on the musical aspect of it. Unlike something like La Corda d’Oro, this story evokes the atmosphere of a real music school, where the students aren’t simply exposed to “Your Favorite Classical Music Hits” and contains little tidbits like (regarding Beethoven’s violin sonata, “Spring”), “Even though Beethoven wrote this when he was depressed about his hearing and was sleeping around with girls, it sounds like a happy song.” Not that things are all classical seriousness by any means. After all, at the beginning, Nodame appears to be writing a piece about farting.

The art is terrific, with lots of movement and expression, and the ability to make the music feel real, which is no easy feat.

With its fantastic oddball characters and deep musical focus, Nodame Cantabile seems to have been written exactly with me in mind, and I honestly can’t wait to run back to the comic shop to pick up the second volume. Let’s hope it’s still there!