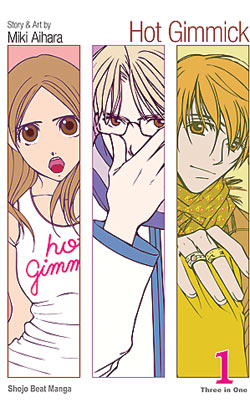 Hatsumi is an average girl, unnoticeable at school and mediocre in her studies, whose family lives in company housing where their conduct is under constant scrutiny by the boss’ self-important wife. When the boss’ son Ryoki, a notorious bully, finds out that Hatsumi’s promiscuous younger sister is using a pregnancy test, he blackmails Hatsumi into becoming his “slave,” whom he expects to do anything he says, up to and including providing sexual favors. Hatsumi struggles gamely to avoid being the guinea pig for Ryoki’s sexual “practice” sessions, but things get pretty hairy until she is eventually rescued by her former childhood friend, Azusa, now a famous male model, who has moved back to the housing complex and begins pursuing Hatsumi romantically. Unfortunately, Azusa is far from what he seems, and eventually Hatsumi finds herself in the unlikely position of being rescued from him by Ryoki, placing her in the middle of an uncomfortable tug-of-war between two equally unpleasant young men. Meanwhile, Hatsumi’s older brother (who is apparently not actually related to her by blood at all, unbeknownst to Hatsumi) appears to have feelings for her as well.

This manga offers a bewildering mess of contradiction for the reader. Simultaneously compelling and repulsive, it is the ultimate in guilty pleasure, with heavy emphasis on the “guilty.” With both of the story’s main love interests using Hatsumi in every conceivable sense and violating her horribly, the fact that she maintains any association with either of them by the end of the third volume is really difficult to swallow, and it’s hard to care about her when she cares so little for herself. Still, with so much intrigue obviously yet to be uncovered, it is nearly impossible not to want to know what happens next.

Of the two hideous love interests, the one most genuinely interesting is Ryoki, whose pitiful lack of social skills would make him almost sympathetic if he was even slightly less abusive. It’s obvious that he has strong feelings for Hatsumi, perhaps has had for years, yet he is utterly incapable of expressing affection or any kind of feeling at all without resorting to bullying to get what he wants. From what’s been shown of his home life so far, it’s probably safe to assume that he has never experienced genuine affection himself, so it’s understandable that he would have no means for expressing it, but that doesn’t actually excuse his constant abuse and degradation of Hatsumi. Though he may indeed grow over the course of the series, and perhaps even begin to display the beginnings of an actual human being, it is hard now to imagine being able to forgive him for his current behavior.

Asuza, on the other hand, inspires little interest or compassion at this point in the story. It’s hard to feel sorry for someone who, under any circumstances, would abuse and humiliate an innocent young girl in order to wreak vengeance on someone else, so by the time his personal sob story is being revealed, it’s too late to elicit much sympathy. His pathology is clearly visible and probably as complex as Ryoki’s, but while Ryoki’s obvious social anxiety might buy him a couple of halfhearted pats on the head, Asuza’s refined, pre-meditated cruelty is nothing but despicable.

Hatsumi’s sad self-loathing is not especially different from that of most insecure teenage girls, but it is painful to watch her allow herself to be taken advantage of by everyone around her. Even her little sister has her wrapped around her finger. Out of everyone in this series, it is Hatsumi’s growth I hope for the most, though she has a long, long way to go. So far, it is only Hatsumi’s brother who seems to care for her in any way that allows him to treat her with real affection and respect, though admittedly we have seen relatively little of him so far.

Aihara’s art is a highlight of the series. The visual storytelling flows nicely, with attractive character designs and kinetic panel layouts.

All complaints aside, Hot Gimmick is nearly impossible to put down, and Viz’s new edition of the first three volumes in its hefty VIZBIG format make that even more difficult, providing three times the temptation in one attractive package. For those new to the series, this is absolutely the way to dig in. Though I can’t recommend this series without some serious reservations, I also can’t deny its appeal. For fans of soap opera and bodice-ripper romance (with a hearty side of schadenfreude), Hot Gimmick is a no-brainer. For the rest of us, it is a potential guilty pleasure of the most extreme kind.