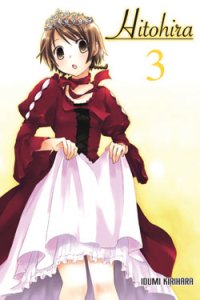 Timid Theater Research Group member Mugi takes the stage in her first leading role in the performance that will determine whether the club must be forced to disband. After a rocky start, she finally comes into her own as an actress even while club president Nono loses her voice onstage. Unfortunately, the club’s best efforts are not enough, and it is the official theater club that wins the fight for its existence. After the Theater Research Group’s members part ways, spunky freshman Chitose (an official theater club member still harboring a crush on senior Research Group member Takashi) suggests to Mugi that they have a Christmas party with the senior members of both their clubs to bring them all together again. The party is a success, but there is heartbreak in store for both girls, as Chitose is rejected by Takashi and Mugi finds out that her best friend, Kayo, is leaving to study overseas.

This volume is short on focus but this actually matches the emotional states of the characters quite well, ensuring that the reader feels keenly the shaky ground everyone is treading on for most of the volume. With all the primary characters at loose ends, it’s hard to see where things will go at this point, but fortunately the story is strong enough now to carry that kind of uncertainty and still compel readers to care what happens next. Though Nono’s voice has become a serious problem, her story takes a back seat in this volume, giving more attention to Mugi’s personal relationships (both with Kayo and love interest Kai) and the void left in her life after the dissolution of the club.

Despite the scattered feel of this volume, Hitohira continues to become more appealing as it goes along, providing more insight into its engaging group of characters as they struggle to discover their individual paths.