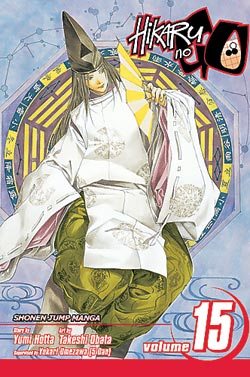 As volume fifteen begins, Sai becomes concerned that he is quickly fading from Hikaru’s world just as Hikaru is getting into the swing of his life as a professional Go player. At an overnight hotel event where Hikaru and other pros play teaching games with guests, an extremely intoxicated Ogata once again begs Hikaru for a chance to play Sai. Sai, worried that this may be his only chance, asks Hikaru to let him play and Hikaru agrees, convinced that Ogata is too drunk to notice. Unfortunately, Sai’s style and genius shine through regardless of Ogata’s blood-alcohol content, so Hikaru hurries home early the next morning to avoid running into Ogata at the hotel. Arriving home exhausted, Hikaru only wants to nap, but Sai, certain that his time is nearly up, convinces Hikaru to play one last game. This scene becomes truly heartbreaking as Sai reflects on his importance to Hikaru (and vice versa) while Hikaru nods off, eventually waking to find himself alone. The rest of the volume follows Hikaru on a frantic journey to recover Sai that ends only in sadness and deep regret.

After fourteen volumes of energetic rivalry and awesome shonen sports manga-style suspense, this volume offers the first real heartbreak of the series, and it is honestly devastating. The agony of watching Hikaru dismiss Sai’s worries through the first few chapters, knowing that something painful is surely on the way, is eclipsed only by the suffering incurred later on as Hikaru’s regret really sinks in, leaving him sobbing in a storage room at the Go Institute, begging for a chance to strike a bargain with God. What takes place in between is a whole lot of seriously masterful visual storytelling. Hikaru’s hopeful panic as he rashly takes off on an impossible day-trip to Innoshima in an attempt to track down Sai is powerfully kinetic, dragging the reader, breathless, from site to site with no choice but to barrel right alongside Hikaru as he chases the remnants of Sai’s distant past from Tokyo to Hiroshima back to Tokyo again, finally crashing smack-dab into the reality of his loss.

Yumi Hotta’s characterizations are undeniably strong throughout, but it is Hikaru who shines in every single panel with his brash single-mindedness and complete lack of forethought which together perfectly contradict and complement his genius in the game. His energy honestly bursts from the page, pushing the story along with plain, brute force, and this volume is the ultimate example of that, seen most literally in Hikaru’s aggressive speed-game with a top-ranked amateur who he sees only as an obstacle to his reunion with Sai. What’s most striking is how completely Hotta captures the inner world of a middle school-aged boy–all his hopes and blunders and rushed conclusions, punctuated with small, significant moments of real caring, just on the brink of a greater awareness. That desperate scene in the Go Institute’s kifu store-room provides a glimpse of the man Hikaru might be, even through all the tears and futile pleading.

Perhaps what provides the greatest energy and poignance in this series, however, is Takeshi Obata’s art. From Sai’s delicate beauty to Hikaru’s straightforward simplicity, every page is filled with exuberant detail–just enough to be surprisingly realistic while maintaining the youthful whimsy of a comic suitable for kids.

There are some other small gems in this volume, too, that should not be overshadowed by the story’s larger drama. The understated portrayal of drunken Ogata is near-perfect in evoking that hazy, late night buzz-on-the-brink-of-discomfort, for readers who are old enough to know. Later, near the end of the volume, Waya and Toya’s similar reactions to Hikaru’s absence from a scheduled match are delightfully spot-on for each of their characters. It’s a pleasure to watch them there side by side. Also terrific is the volume’s final scene, featuring Waya and his roomful of insei friends as they talk excitedly about upcoming study sessions and next year’s pro trials–a wonderful reminder that everyone’s journey keeps on going, even as Hikaru has cleared his first great hurdle and entered into the world of the pros.

On a personal note, Hikaru no Go was my first introduction to manga and it was oddly gratifying to be reminded as I read this volume for review just how wonderfully crafted it is. I’ve read a lot of manga series since in just about every genre, but the unique charm and simple elegance of the storytelling in Hikaru no Go easily maintains its place amongst my favorites.

Volume fifteen of Hikaru no Go is available on May 5th, 2009. Review copy provided by Viz.