Hi hi, sorry for all the silence the past couple of days. I’d made a rule for myself that I wasn’t allowed to spend time on a blog post until I’d finished my Tokyo Babylon review, and I finally have! (Reprinted below following the demise of the blog Comics Should Be Good, for which it was originally written.) It’s pretty image-heavy and probably looks more like one of my persuasion posts than a typical review, but I thought I’d do something a little special for the full series. I’m a tad nervous about my new place over there, so if you have the time, please check out my review and let me know what you think!

Look for a real blog post later on. I have lots of thoughts swirling through my brain, and no time to write them down! Soon!

Originally created in 1991 by all-female mangaka group CLAMP, Tokyo Babylon tells the story of Subaru, the thirteenth head of the Sumeragi clan, a family of onmyoji (spiritual mediums and sorcerers) who have protected Japan for hundreds of years. Just sixteen years old as the series begins, quiet and unassuming, he is already an experienced and powerful onmyoji. He shares an apartment in Tokyo with his worldly, outgoing twin sister, Hokuto, who dresses him up like a doll in her hand-picked fashions. The two have become friendly with a local veterinarian, Seishiro Sakurazuka, whose surname suggests he is related to an infamous clan of magical assassins. Despite this sinister connection, Seishiro is mild-mannered, kind, cheerfully protective of the twins and repeatedly claims to be in love with Subaru, which draws enthusiastic support from Hokuto but embarrasses Subaru terribly.

Despite a cynical opening chapter and the series’ occult premise, the story gets off to a fairly light start and it would be easy to dismiss it as stylish fluff. By the end of the first volume, however, darkness begins to push toward the surface in the form of an old memory that causes Subaru to suspect there may be more to Seishiro than what he claims. This uneasiness hovers in the background for much of the series (only manifesting fully in the final volume), but as it slowly seeps into the fabric of the story it highlights the peculiar depth and Shinto-influenced ideology that has long characterized CLAMP’s work. 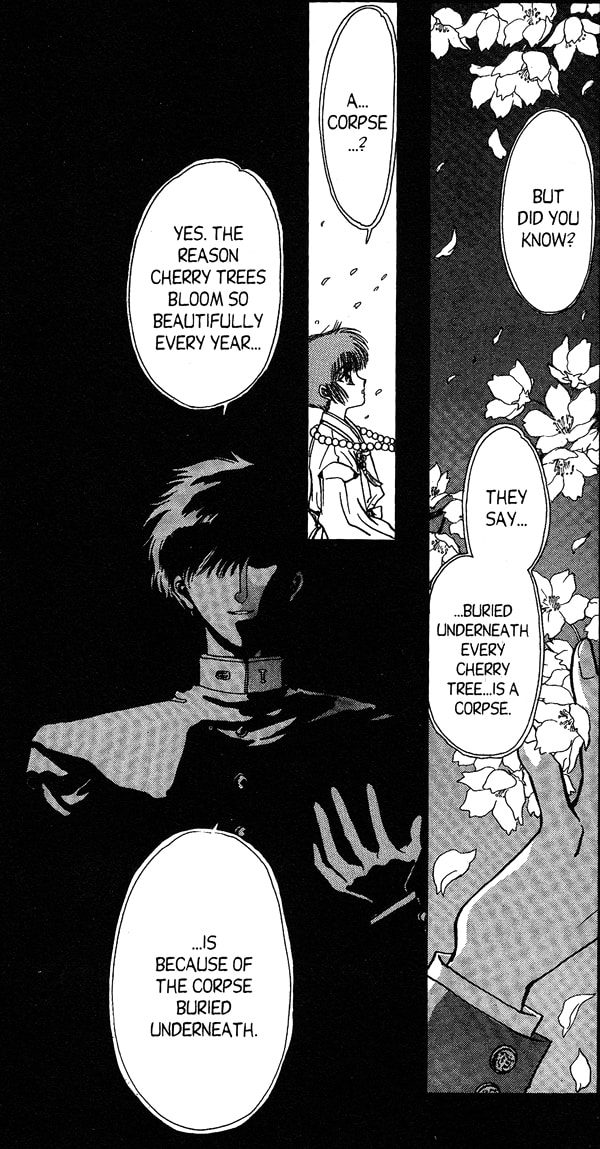 As Subaru performs his missions as an onmyoji, he encounters many sad or lonely people, some of them alive, some not. One early story, for instance, involves a childhood friend of Subaru’s who has fallen into a perpetual dream state in an effort to escape her traumatic waking life. Another features the ghost of a failed actress whose love-hate relationship with the city has kept her bound to the main observation deck of Tokyo Tower. In another, Subaru befriends an old man who has spent years of his life fulfilling a promise to his late wife, desperate to complete it so that he may finally join her.

In one particularly poignant story, Subaru encounters a woman who is determined to place a curse on the man who murdered her young daughter, Mai. Subaru urges the woman to abandon revenge both for her own sake and her daughter’s, and even calls upon Mai’s spirit so that she can tell her mother what she truly wishes her to do. However, instead of angelically entreating her mother to stop, Mai arrives crying in pain, begging her mother to avenge her, something which Subaru finds himself wholly unable to convey.

The primary message CLAMP drives home in Tokyo Babylon is that no person can ever truly understand another person’s pain, and that the kindest thing people can do for themselves and each other is to recognize and embrace that fact. Interestingly, the character who seems to understand this best is Subaru, though he is also the person who most often tries, as he strives desperately to ease others’ pain while generally ignoring his own. Despite his formidable spiritual powers, Subaru leads an oddly passive existence, dutifully fulfilling his calling as directed, though his personality is obviously ill-suited for the job. He works tirelessly and without complaint, his naturally compassionate nature allowing humanity’s darkest corners to erode his seemingly incorruptible heart. 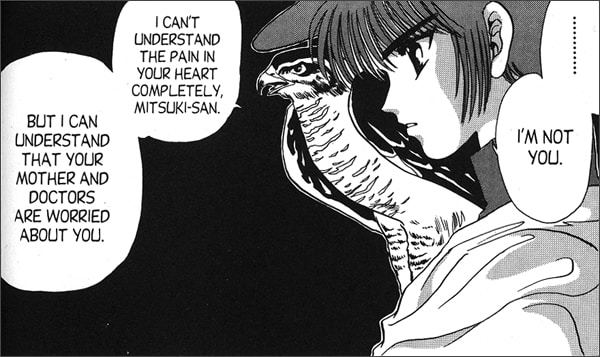 Seishiro’s steady pursuit of teenaged Subaru alternates between being sweetly good-humored and intensely creepy, and for those who find the concept disturbing, be assured that the dramatic payoff is well worth it. As hinted early on, Seishiro is indeed more than he seems, though the full truth about him is not revealed until very late in the series. None of the primary characters in Tokyo Babylon is especially transparent or easily placed into manga stereotypes. Each is multi-layered and idiosyncratic, and each lends something unique to this quirky, shadowy tale.

Though Subaru and Seishiro tend to dominate the pages of most volumes, it is Hokuto who is the story’s unexpected gem. Fun and breezy, she initially seems interested in little besides in keeping Subaru dressed up in elaborately assembled outfits and nudging him toward Seishiro. As the story progresses, however, her real depth begins to show, and she eventually proves herself to be strong, compassionate, and kind of a bad-ass. It also becomes clear that her world is dominated by her devotion to her brother. “I wanted you to have something you would love so much, that you wouldn’t care what others thought,” she says to Subaru late in the series, as his world is unraveling around him. “Something you wouldn’t change your mind about. It didn’t matter what it was. I just wanted you to have something like that.”

Despite the series’ many strengths, Tokyo Babylon is far from perfect. Its episodic setup leaves too much room for unevenness and blunder, and it takes several volumes for CLAMP to successfully establish the story’s real tone, which means the series does not really come into its own until volume four. Still, getting there is well worth the effort, and not just because Tokyo Babylon is a great read (though it is). This series also provides an opportunity to delve into early incarnations of the themes and ideas that have come to define CLAMP’s diverse body of work. The selfishness of self-sacrifice, the murky quality of “good” and “evil,” the pain of loneliness, the necessity of wanting to exist–CLAMP uses Tokyo Babylon to explore these ideas to the full extent of their skills at the time, and everything that begins here is carried through their later work, one way or another. This is not to suggest that they are stealing from themselves or just repeating ideas (though they do like to reuse their characters). This is simply the natural evolution of ideas as they progress from one series to the next, finally reaching maturity in xxxHolic, a series which remains ongoing both here and in Japan. 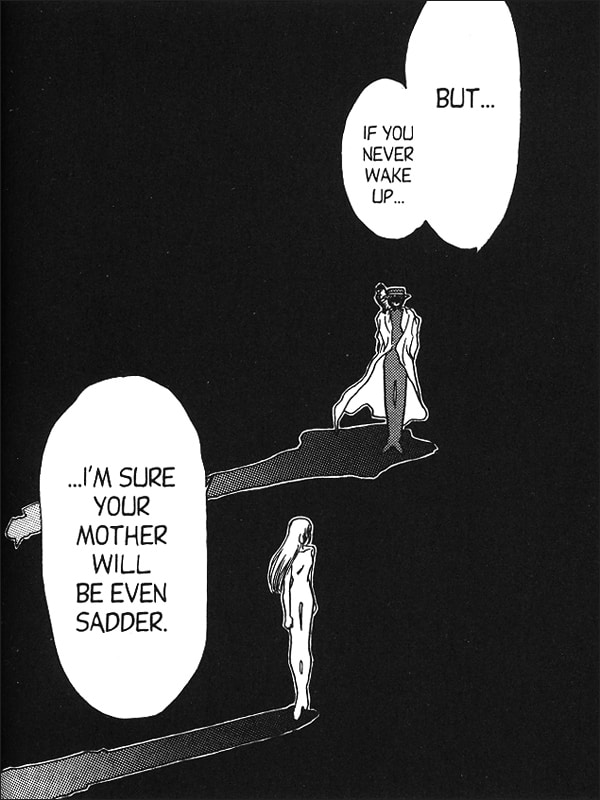 With its beautiful, clean imagery and striking use of black, Tokyo Babylon is unmistakably CLAMP’s work, though again, it doesn’t show the maturity of their later work, or even X/1999 which began its run before Tokyo Babylon was completed. As early as this work is, however, the visual storytelling is extremely effective, with the same intuitive panel layouts and creative use of space that makes all of CLAMP’s work both a pleasure to look at and easy to read. The artwork shines in black and white, capturing perfectly the stark drama and lurking melancholy of the series, and the story’s seven volumes feel truly epic, largely on the strength of its visuals.

TOKYOPOP’s English language editions, released between 2004 and 2005, are very nicely done, with crisply reproduced artwork and fold-out color pages at the beginning of most volumes. This series, like much of CLAMP’s work, is unmistakably Japanese, deeply tied to its Tokyo setting and to Japanese culture in general. TOKYOPOP preserves this by retaining honorifics and sound-effects (with translations in the back), using Japanese name order (surname first), and keeping as many Japanese terms and cultural references as possible within the translation. The detailed glossaries at the back of each volume provide context and explanation for western readers. 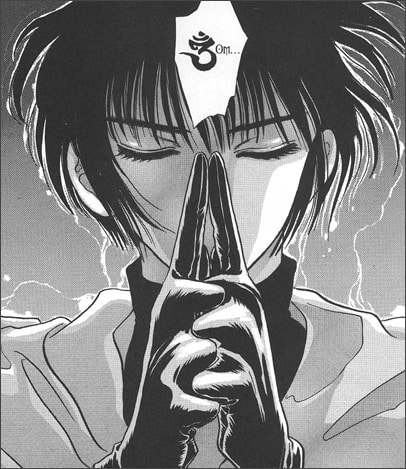 For fans of CLAMP’s newer work, Tokyo Babylon provides a glimpse into the group’s past which will be both compelling and familiar. For new readers, it is a great introduction to the CLAMP universe, in all its complex beauty.