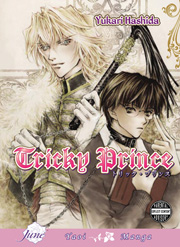 Eugene Ratcliff is a smart, introverted university student, diligently working to maintain his scholarship status. After falling victim to a prank in which he is dolled-up as a girl, he unexpectedly catches the eye of a much sought-after fellow student–the dashing and impulsive Prince Willis. Unfortunately for Eugene, the discovery of his true gender only excites deeper interest from the prince, pulling him into an endless game of cat and mouse from which he is powerless to extricate himself. Willis pursues Eugene relentlessly, following him home for summer vacation, rescuing him from a lecherous professor, even arranging to have his dorm room burglarized. Yet despite the near-constant humiliation Willis’ attentions cause for him, Eugene eventually begins to return his feelings.

Tricky Prince strives to poke fun at the traditional seme/uke dynamic, but it isn’t nearly smart enough to pull it off. Instead, the story becomes just another example of what it attempts to mock. Though it does manage a few genuine laughs (thanks mainly to Eugene’s hostile wit), most of its other humor falls flat as well, mired in cliché it isn’t clever enough to transcend.

Unfortunately, the story’s tender moments are no stronger. Since neither of the two main characters are developed fully enough to truly be interesting, it is difficult to invest in their relationship with each other, a matter made worse by Hashida’s emotionally empty artwork. Though generally attractive, most of the story’s characters remain uniformly expressionless regardless of what’s going on, and Eugene’s apparently intentional resemblance to boy wizard Harry Potter is actually mildly disturbing.

Though Tricky Prince clearly aims to be a sly, sexy, hilarious romp, it unfortunately falls short on all counts, providing neither substance nor fun.