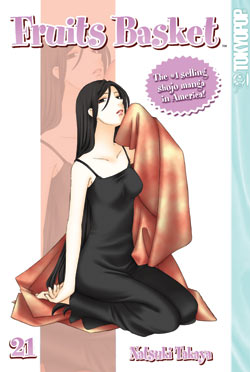 With only two volumes yet to go, the English language release of Fruits Basket is nearing its close, and as the story races forward, emotions run high all around. At the end of volume 20, Tohru attempted to confess her love to Kyo, but was cut off by Kyo’s stunning confession that he felt responsible for the death of her mother. She finally gets to voice her feelings in the opening chapter of this volume, but not before Kyo finishes his own painful story, ultimately leaving her in tears. Things continue to go horribly wrong, leading to an ugly confrontation between Akito and Tohru, and another later between Yuki and Kyo.

If you’re like me, you’ll need a box of tissues handy to make it through the first few chapters, in which even a raving, knife-wielding Akito manages to somehow evoke sympathy. The most touching scene, though, may be in the final chapter when after all the noisy drama of the rest of the volume, Yuki finds a cozy resting spot on his own personal journey with quiet student council secretary Machi.

Mangaka Natsuki Takaya’s practice of using only the most subtle visual cues (if any) to indicate who is speaking can be irritating, but in this case, forcing the reader to deliberate carefully over each fragment of text only encourages a deeper read, allowing for greater absorption of this volume’s intense emotional content. Each panel is rich with complex history and feeling between characters, presented in the deceptively simple manner that characterizes this series overall.

As always, much of Takaya’s ability to make palatable the selfishness and cruelty her characters often display can be credited to the refreshingly genuine quality of her protagonist. Few of us can claim to see the world through eyes as open, joyful, and compassionate as Tohru Honda’s, but the great appeal of Fruits Basket is in that it manages to make us believe we can, at least for an hour or so.