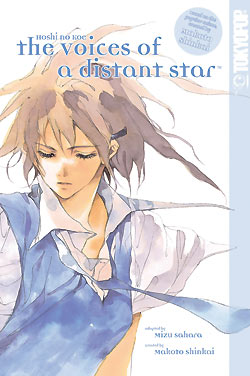 Based on Makoto Shinkai’s short film, The Voices of a Distant Star is a story of two young people separated by space and, more importantly, time. As the people of Earth carry on an intergalactic war with a technologically advanced alien race, fifteen-year-old Mikako is called into service on the U.N. spacecraft, Lysithea. She leaves behind her childhood friend, Noboru, just before they would have entered high school together, and right at the age when their friendship is on the brink of deepening into something more. Their sole means of communication is low-priority electronic mail using their cell phones, and as Mikako travels light years away the time it takes for their messages to be delivered increases, reaching over eight years for a single delivery before the story’s end.

Over the course of the story, Noboru grows to adulthood on his own while Mikako remains a teenager, her middle-school days barely behind her. As Mikako’s messages begin to arrive farther and farther apart, Noboru first tries to free himself from his doomed attachment, but he eventually abandons this in favor of working toward an opportunity to join the rescue party being sent out after Mikako’s ship, in hopes of reuniting with her.

Voices of a Distant Star was Makoto Shinkai’s first work released after his award-winning five-minute short, She and Her Cat. Created entirely on his home computer, it was completed in 2002. Its themes of loneliness and separation, revisited often in his later work, are perhaps most stunningly portrayed in this short film. While the film was focused tightly, even narrowly, on the two main characters, for the manga adaptation Mizu Sahara adds some additional context to each of their lives, introducing us to two shipmates of Mikako’s, as well as some friends (and even a short-lived girlfriend) of Noboru’s back on Earth.

The effect of this is twofold. On one hand, it is gratifying to see Mikako discovering kindred spirits on her journey. On the other hand, it becomes even more clear just how cruel the situation is. Both are affected, but especially Noboru, who is so firmly attached to Mikako that he is unable to connect with anyone in his present life, which, unlike Mikako’s, is rapidly passing him by. At one point in the manga, after more than a year with no messages from Mikako, Noboru begins to form an attraction to a girl in his class, but just as he might have finally broken free and allowed himself to live in the present (his present), a message finally arrives. This is incredibly romantic from a certain point of view, of course, but from another it is simply horrifying, demonstrating clearly just how destructive and hurtful a relationship like this might be. It is also good storytelling, and it’s impressive that a manga adaptation of such a moving film is able to achieve even greater effect here than the original. The idea that two people, each acting out of sincere love for the other, can still end up hurting one another terribly is one of those unfortunate truths of life that most people would prefer to ignore. Mizu Sahara makes that impossible here.

One difference in the adaptation that is less effective is the way Sahara handles the ending. In the film, the futures of both Noboru and Mikako are left unresolved, with Mikako fighting to save her comrades, and Noboru heading off to unspecified Armada duty. There is hope that they might meet again one day, reinforced by a vision Mikako has just before her squadron falls under attack, but both characters seem to have come to terms with the uncertainty of that hope. The manga, however, works very hard to bring them back together, sending Noboru off on a mission to rescue the survivors of Mikako’s last battle. The film ends with Mikako and Noboru, light years apart, each sending the same mental message to each other, “I am here,” to which the manga adds, “… Because we are destined to meet again.”

Again, this is a very romantic notion, but not as powerful, or even as conclusive as the open ending of the film. There was a kind of comfort in knowing that both characters had finally embraced their own lives and come to a place where simply understanding that the other was out there was enough, at least for the moment. In pandering to the reader’s (and perhaps her own) desire to bring the characters back together, Mizu Sahara has created an ending that is weaker and less satisfying.

That said, the manga is absolutely beautiful. The art is nicely detailed and very expressive, and the panel layouts, including the placement and style of dialogue and narrative text, make the story visually interesting and easy to follow. The additional material adds more layers to the relationship between the two main characters, like the scenario in which Noboru attempts to repair a favorite hair clip of Mikako’s, forced finally into giving up and buying her a new one to hide his failure. There is an extremely touching moment later where he admits this to Mikako (which of course, she’s known all along) that is very nicely written. Sahara also spends more time exploring both Mikako’s and Noboru’s feelings about Mikako’s appointment to the Lysithea, which is very revealing for both characters.

Regardless of the manga’s differences from its source material (both weak and strong), as a standalone piece, Mizu Sahara’s The Voices of a Distant Star is ultimately successful in telling a thoughtful, heart-wrenching story that is both visually and narratively appealing.