It is rare to find a series that is so fully realized in terms of both art and story that there is absolutely nothing to nitpick, but Witch Hat Atelier is one of those manga. Coco is a young girl who helps her mother who is a seamstress. Coco lives in a world where magic is practiced only by a select few, but she’s extremely curious about how it all works. Her life is changed when she sees a flying carriage land near her mother’s shop and she runs into a mysterious gentleman who wears glasses with one tinted lens. Coco ends up cutting a length of cloth for the man, and she recounts a story that ties in with her fascination for magic. When she was younger, she encountered an enchanter who wore a hat decorated with a single eye, fringed with fabric that obscured his face. He offered to sell Coco a book of magic spells and even gave her a wand. Coco soon found out that people need to be born to magic, and gave up on her dream. When the flying carriage is damaged, the mysterious man identifies himself as Qifrey the Witch, and he decides to fix it. Coco spies on him and discovers that magic isn’t something one is born with, it relies on careful drawing with a pen. She promptly decides to experiment. 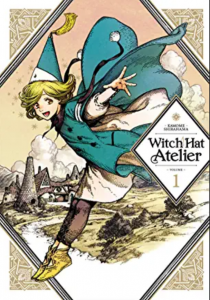 Like most books that feature a child adventurer and inconvenient parents, Coco’s mother is quickly dispatched when Coco’s first spell goes awry, turning her into a statue. The only solution is for Coco to dedicate herself to learning magic in order to reverse the spell. She becomes Qifrey’s newest apprentice, and travels with him to his school where he is already teaching several other girls her age. Coco has an enthusiasm for knowledge and a unique way of looking at magic but her fellow apprentices are suspicious of her. Coco’s roommate Agott in particular has a cranky attitude which backed up with unusual expertise in magic. The world of magic can be dangerous, for example when Agott goads Coco into taking a test that she’s unprepared for. The girls later get whisked away to a labyrinth guarded by a dragon due to some machinations of the witch with the eyeball hat, and later help with a rescue. The world is filled with odd magical contraptions that take the place of technology, like a water bubble for transporting water, bricks that light up under people’s feet, and shoes that are enchanted to give the power of flight.

Shirahama has a detailed style that is reminiscent of illustrations that might be in a classic childrens’ book. Panels are occasionally decorated with botanical motifs, with a nod to art nouveau. The various costumes of the witches have elaborate decoration, and spells look intricate, causing effects that look both elegant and unnatural. The worldbuilding and illustrations are lovely, but there’s an undercurrent of menace, as the one-eyed hat magical practitioner is intervening in Coco’s life for an unknown reason. The secretiveness of the witches also causes Coco to be threatened with a memory wipe spell multiple times. Her status as an outsider gives her an innovative and instinctive feel for magic, and she often manages to improvise spells due to her unique mindset. Coco’s new found family keeps expanding as the series develops, and it seems like she’s meeting other magic practitioners that ultimately will help her if there’s a confrontation with the dark witches who seem to be far too interested in her. There’s certainly some Harry Potter parallels, but not enough to make it seem like Witch Hat Atelier isn’t original. I’m equally entertained by both the art and the story in Witch Hat Atelier, and highly recommend it if you are looking for a fantasy series that lets the reader disappear into another world for a little while.