until the full moon

MICHELLE: Howdy. This place looks like a ghost town. Check out that well-timed tumbleweed.

MELINDA: Do you think we can bring it back to life?

MICHELLE: I reckon we can. Especially if we can rustle up some of them ladies of ill repute.

MELINDA: Oh, good idea! I’ll see what I can come up with on that front. In the meantime, you wanna tell us what you’ve been reading? 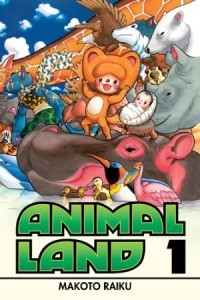 A whole bunch of new series from Kodansha have debuted this month, so I checked out a couple of those. The first was Animal Land by Makoto Raiku, whose Zatch Bell! was previously released by VIZ. I wasn’t sure if I’d like this and, even after having read it, I’m still not quite sure what to make of it.

Monoko the tanuki lost her parents to wildcats three months ago and is very lonely. One day, when she’s trying to catch a fish in the river, she spots a floating basket with a baby inside and is instantly smitten. She is determined to be a mother to the baby, and braves many dangers to provide milk for him and, with the help of the other tanuki, brings him back to life when he seems on the verge of death.

It soon becomes apparent that this is one unusual baby, since he’s not only able to understand tanuki speech, but can actually converse with all animals. This skill manifests most poignantly in regards to Kurokagi, a scarred, black wildcat who’s been hanging around. The tanuki all fear him, but Kurokagi has actually appointed himself their protector after a tragic incident in which he caused the death of an infant animal. It’s fairly bizarre watching this baby, who doesn’t even crawl all that well, holding a reasonably adult conversation with a giant wildcat, I must say.

So, yes, there are some nice moments here. And I like Kurokagi. But there are also some things I don’t like. The art, for one, is often unattractive. I don’t like how the tanuki are drawn at all, for example. For another, this is clearly a story for young kids, with a zany sense of humor that relies heavily on poop jokes. Seriously, characters will just randomly start pooping for no reason. It’s ironic, really, since I bet the poop is there to appeal to ten-year-old boys—I imagine Japanese manga editors calling for “More poop!”—but here in the US, its prevalence results in the book receiving a teen rating.

I’ll probably check out a second volume, but this may end up being a series that’s just not for me.

MELINDA: You know, even as a kid, I was pretty much immune to the charm of poop jokes. I just don’t get the appeal.

MICHELLE: I think appreciation of poop jokes resides on the Y chromosome. 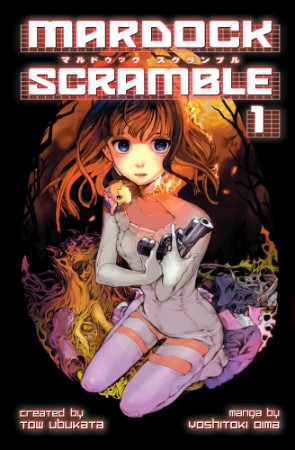 MELINDA: Well, I decided to make it a Kodansha week too, and the results surprised me greatly. First, I read the debut volume of Mardock Scramble, which is the manga adaptation of Tow Ubukata’s novel trilogy of the same name that was released as a single volume early this year on Viz’s Haikasoru prose imprint. I hadn’t read the novel, and didn’t have high expectations for the manga adaptation, but actually I enjoyed it quite a bit.

Young Rune Balot thinks she’d be better off dead. “Rescued” from a life of abuse and prostitution by a guy named Shell, it’s only after Shell tries to kill her that Rune makes a (subconscious) choice to stay alive. She’s rescued from near-death by a techie detective, who gives her a new body and a shape-changing cyborg mouse to protect her, in the hopes that she’ll agree to testify against Shell in court.

There’s a whole bunch of stuff about Shell, who apparently kills girls and then loses his memory afterwards, and another mysterious man who’s coming after Balot, but even with so much plot and intrigue going on, the real story is in Balot, about whom we still know little, whose second chance at life could turn her into a completely different person–probably awesome, possibly terrifying. She’s the thing that really draws the reader in. Though the super-cute, badass mouse doesn’t hurt either.

Novel adaptations are hit-and-miss with me.Too often, I think they try to rush the story, or try too hard to be visually thrilling (especially in terms of fanservice) when really they just need to practice good storytelling. But I’m on the edge of my seat with this one. There’s still a lot to be revealed, and mangaka Yoshitoki Oima has left us with quite a bit of mystery (and a pretty big cliffhanger) at the end of the series’ first volume, but I’ve been given enough to be pretty well hooked.

I’m tempted to pick up the novel now, though I’d hate to risk compromising my enjoyment of the manga when I really am enjoying it so much.

MICHELLE: Wow, that sounds truly awesome. I was also somewhat wary that the prostitution backstory would mean fanservice would ensue, so I am happy to hear that’s not the case. And my inner twelve-year-old is *really* keen on that mouse!

MELINDA: Michelle, you would love the mouse. Truly.

Now, my second Kodansha adventure this week had a bit of the opposite effect on me, and since I know we both tried out this one, I’m anxious to hear whether your experience was similar. Care to start with a little summary?

MICHELLE: I will give it a whirl. 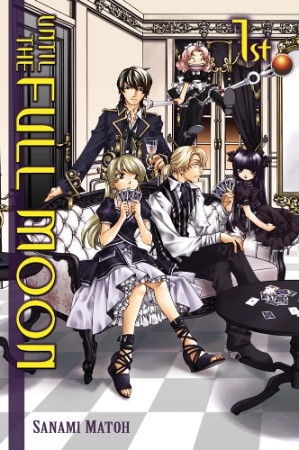 Until the Full Moon is a two-volume series by Sanami Matoh (Fake) that was originally published in the US by Broccoli Books. I actually owned that edition for several years and gave it away unread, but now I am finally giving it another chance.

Vampire cousins David and Marlo were extremely close growing up, but Marlo has been keeping his distance the past ten years or so while his family lived in America. Now they’re back, and have come to David’s doctor father to discuss a bizarre condition Marlo has recently developed. He’s half-werewolf, and has begun to transform into a woman on the full moon! His parents angst in over-the-top fashion until David’s father suggests that the only possible solution is that David and Marlo must get married. The date is set for a full moon a year in the future.

Various obstacles insinuate themselves between the couple, be it a family friend who mistakenly believes his sister is in love with David, or an ex-girlfriend of Marlo’s who is jealous when she realizes that David is the one to whom Marlo was referring when he confessed he loved someone else. Everything is very campy, with lots of silliness and epic kisses upon floral backgrounds. The interior artwork is possessed of retro charm and that vintage Matoh look, but the cover art is distressingly generic-looking: I found myself very distracted by my inability to tell who some of these characters were even supposed to be. They look like they’re from some other series entirely!

MELINDA: Yes, I never would have picked it up from the cover art, but as soon as I saw the old-school look of the inner artwork, I was determined that I would love it. On top of that, the outrageous, gender-switching werewolf premise convinced me that this would be exactly the kind of cracktastic “classic” shoujo in which I most delight. Unfortunately, I was pretty disappointed in the silly reality.

The premise is, indeed, cracktastic, but the story itself reads more like a bad teen-penned novel than brilliantly mad shoujo. The volume’s main conflicts all read as completely contrived, with no real tension or meaning of any kind. I mentioned in Monday’s Pick of the Week that I would be content simply looking at this manga, and I’m wondering if I should have left it at that after all.

MICHELLE: While I was reading it, I kept comparing it to what I’d heard about the inventive kookiness of Demon Sacred which, from all accounts, was the very epitome of “brilliantly mad shoujo.” Alas, you’ve hit the nail on the head in describing this as “contrived.” David and Marlo also keep up the standard horny!seme and reluctant!uke roles, no matter what gender Marlo happens to be at the moment. The one element of the story I do appreciate is how David makes it clear that his feelings are for Marlo the person, not Marlo the specific gender.

MELINDA: The comparison with Demon Sacred is very apt, and sadly brings Until the Full Moon‘s shortcomings into clear view. Demon Sacred used its super-fantasy world as a tool for enhancing the real emotions of its characters. Here, the vampire/oddly transforming werewolf stuff feels superfluous to everything, like a badly re-themed board game.

What’s particularly sad to me, is that I actually sort of like David and Marlo as a couple, even with the clichéd BL roles, and might have been quite interested in just watching the two of them deal with their own issues. But the author relies so much on the external characters to threaten their happy existence, there’s never really any time spent on the two of them as a couple.

MICHELLE: You’re absolutely right. We just know they love each other ‘cos they say it all the time, but we don’t actually know why or see any of the moments between them that led to the development of these feelings. It’s extremely shallow.

And, yes, dead horse, but can we go back to the cover for a minute? Because seriously…. who are these people? Is David the blond on the couch with the ponytail? I don’t recognize ANY of these other characters. Not one. I am truly baffled.

MELINDA: I can only assume it’s going for a more contemporary style in an attempt to bring in newer readers? It’s a shame, really, since the vintage artwork is the book’s best quality by far.

MICHELLE: I assume that as well, but I am at a loss as to who the female characters in particular are even supposed to be. Maybe they’ll turn up in volume two, but it’s very puzzling and, as you will note, distracted me a good deal. :)

MELINDA: Yeah, it’s kinda like they took characters from Pandora Hearts (or something along those lines) and randomly stuck them on the cover.

MICHELLE: Heh. Yeah. So, anyway, do you think you’ll read volume two? I probably will, since that’s also the final volume.

MELINDA: Yes, I probably will. Though this disappointed me, it didn’t actively offend me, and I’ll nearly always give something a few volumes to find itself. Surely I can make my way through one more.

MICHELLE: I think that’s a great note to end on. “Until the Full Moon… not actively offensive!”

MELINDA: Works for me! See you next week!