The Gods Lie by Kaori Ozaki

I waited a long time to read one of my favorite manga of the year. I bought The Gods Lie shortly after it came out, but it has been sitting on my to-read pile for months. This is a coming of age story showing the developing relationship between Natsuru, a soccer prodigy, and Rio, a girl who stands out at school for being overly tall and silent. When the story opens, it first seems like a slice of life manga, but soon the reader sees that death overshadows the lives of the characters. Natsuru lives alone with his quirky writer mom, because his father died recently. His grandfatherly soccer coach is in the hospital with cancer, and while the replacement coach actually knows how to play soccer, Natsuru doesn’t react well to his new coaching methods.

Natsuru and Rio develop a friendship when he rescues a kitten his mom is allergic to. She offers to take care of it if he’ll help pay for the cat. It is clear that Rio has a stronger sense of household budgeting than is normal for a 6th grader. Her younger brother Yuuta just sails through life cheerfully, seemingly unaffected by their run-down house and need to economize on everything. When Natsuru visits their home, Rio tells him that her father is fishing in Alaska, but will be back in time for the spring festival. Natsuru decides to secretly ditch soccer camp and stays with his new friend over the summer. As the story develops, it is clear that Rio is guarding a secret that she can’t share with her new friend.

There’s a sense of clarity and assurance in Ozaki’s art, it is expressive without being bogged down by too many details. She perfectly portrays the stuck-up and clueless attitude of the class princess, the disrepair of Rio’s house, and the freedom of unstructured summer days. It is a rare manga that is perfect in one volume but The Gods Lie has the feeling of a great short story, capturing a range of experience for the characters in just a few pages, and hinting at what they’ll become as they grow up. 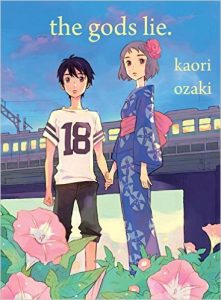