the color of love

Welcome to the May installment of BL Bookrack, a monthly feature co-written with Soliloquy in Blue‘s Michelle Smith.

This month, we take a look at three offerings from Digital Manga Publishing’s Juné imprint, The Color of Love, That Was Good, and Your Story I’ve Known, as well as a rare offering from Yen Press, volume two of Tale of the Waning Moon. 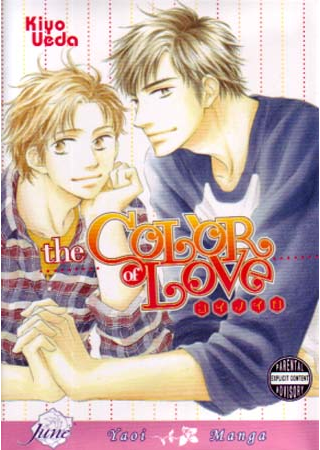 The Color of Love | By Kiyo Ueda | Published by Juné | Rated Mature (18+) | Buy at Akadot – Although we generally review new releases for these BL Bookrack columns, I wanted to take the opportunity to check out The Color of Love (released in 2008), as it is among several DMP works recently pulled from Amazon for violating their content requirements. After reading the book, it is hard to see why it was targeted, when much more explicit BL—Under Grand Hotel, anyone?—is still available for purchase.

Like many BL releases, The Color of Love is a collection of short stories. Most of them, including the title story, feature pairs of friends who are in love with each other but concerned about what this will mean for their friendship. In “The Color of Love,” Nao is worried that his best friend Taira might learn about his “wicked thoughts,” and so helps a classmate cover up her romance with a teacher by posing as her boyfriend. Taira is demonstrably jealous, and a confession ensues.

In “The Ideal Love,” a recent college graduate with a particular type gradually realizes that his former classmate might just be the perfect match. In “How to Be Happy,” Kouta can’t quite believe that his best friend, Kazuyuki, has confessed his love since Kazuyuki rejected him back in high school. In “Mix,” Yoshino can’t reconcile Yamazaki his best friend with Yamazaki his boyfriend, so removes his glasses during intimate moments to make his partner look like a blurry stranger. In “Friendship Formula,” Nitta attempts to cheer up a jilted (straight) classmate by confessing his own feelings. The one exception to this theme is “Direction of a Smile,” depicting a romance between a hotel front desk manager and a bellboy.

In all of these stories, the characters involved care about each other very much. Are they depicted in the act of sex? Well, yes, but it’s generally only a panel or two showing bodies locked together lovingly. The Color of Love is no more explicit than your average BL manga and actually far less explicit than many. I suspect that whoever filed the complaint didn’t get past the first page, which, admittedly, devotes its first couple of panels to Nao enjoying a private moment whilst indulging in those “wicked thoughts” of his. This might give an undeserved impression of overall smuttiness.

So, don’t let Amazon’s actions fool you. In reality, The Color of Love is far more nice than naughty. 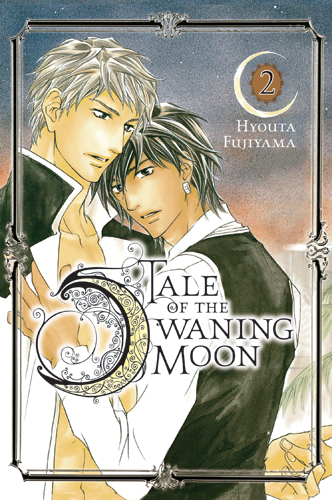 Tale of the Waning Moon | By Hyouta Fujiyama | Published by Yen Press | Rated Mature (18+) | Buy at Amazon – Memory is a funny thing. When the second volume of Houta Fujiyama’s Tale of the Waning Moon arrived at my doorstep, my first reaction was “ugh.” I’d remembered clearly reviewing the first volume, at which time I’d declared it, “…unrealistic, essentially plotless, outrageously fluffy” and most emphatically, “Not My Kind of Yaoi.” What I apparently forgot between then and now, however, is that I also called it “energetic,” and “genuinely funny,” qualities I’m unfortunately having difficulty attributing to the series’ second volume.

Though this manga first won me over with its simultaneous satire of common BL tropes and RPG-style questing, Fujiyama’s sly humor doesn’t wear all that well. The questing in particular has begun to lose its luster, as the characters are sent out on a seemingly endless journey to acquire a series of objects required to get our hero, Ryuka, to his celestial destination, and what once read as sharp humor now resembles too closely the very things it strives to lampoon.

The same can be said for the series’ campy, everyone-is-gay landscape, which risks outright earnestness in this volume—a trait that should never be blended with scantily-clad cat boys. And were jokes about constipation ever funny? Perhaps I missed the memo.

That said, there’s a consistent sense here that the comic is in good hands. Even at her worst, Fujiyama writes smoothly and confidently, stringing us along with the promise of better things.

Will she make good on that promise in volume three? We live in hope. 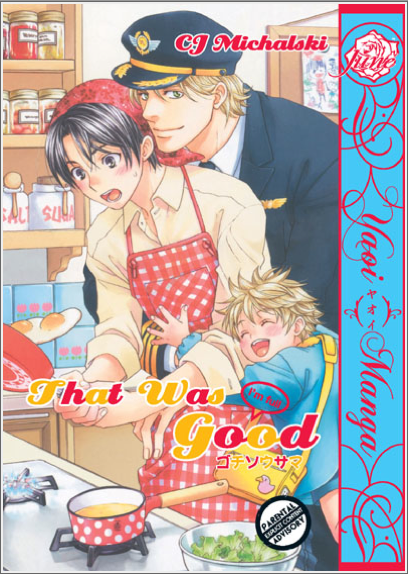 That Was Good | By CJ Michalski | Published by Juné | Rated Mature (18+) | Buy at Akadot – When I go into a BL anthology, I’m always expecting the worst. Questionable plot, shoddy characterization, outrageously rushed romance—these things are standard in any romance anthology. It’s almost guaranteed. Also common in this type of BL is humor so broad it borders on homophobia. Oh, and don’t forget: lots and lots of smut.

That Was Good has everything I just described and more. Its three stories each feature a previously heterosexual, dashing hunk who falls for a (questionably heterosexual) boyish beauty whom he forces into sex, but it’s okay ’cause HE’S IN LOVE. Other special features here include grown men making jokes about eating sausage to a toddler who catches them in bed, and vampire/elf cosplay, though I’ll admit the latter offers up the only genuine bit of humor in the entire book. Skip to the cosplay, people, just skip to the cosplay.

If I sound a bit sarcastic and jaded… okay, yeah, I’m feeling slightly bitter over having read the whole thing. Thing is, it was listed as an anthology, so I should have known better. 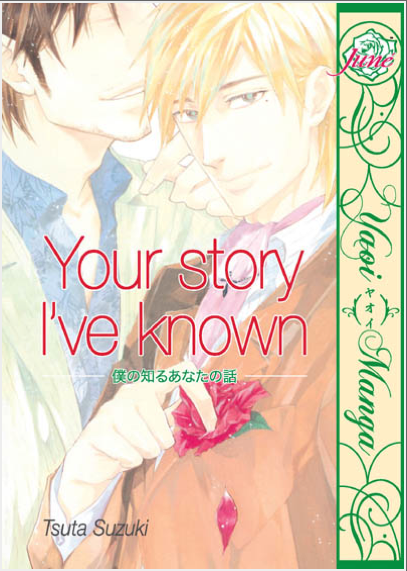 Your Story I’ve Known | By Tsuta Suzuki | Published by Juné | Rated YA (16+) | Buy at Akadot – Although I’d stop short of calling myself an outright fan of Tsuta Suzuki’s series, A Strange and Mystifying Story—sexual healing as administered by guardian beast isn’t really my thing—it is nonetheless memorable, and I’ve been looking forward to reading Your Story I’ve Known ever since the license was announced.

There aren’t any supernatural elements in these stories, which I consider a good thing. The first three stories, including the title piece, depict the relationship between Hart Matsumoto, a dim-witted but handsome boy with an abusive mother, and a yakuza named Shibuzawa, who was the kindest of his mother’s many boyfriends. Shibuzawa provides a safe place for Hart to go when his mother turns violent and continues to look after him into young adulthood.

Although he’s aware of Hart’s feelings for him, Shibuzawa maintains a policy of gentle discouragement until Hart’s mother is killed. Somehow, Shibuzawa ends up in bed with Hart—as consolation, perhaps? Giving the boy what he’s always wanted while withholding the upsetting news? Shibuzawa’s motivations here are quite complex, and it’s a shame that the story of his relationship with Hart wraps up quickly thereafter.

A similar problem plagues the next story in the collection, “Sautéed Onions,” a mostly forgettable story of two friends who’ve recently become a couple and are feeling insecure about the other’s feelings. It’s not bad, but it’s so short that there’s no chance whatsoever to get to know either of the characters. “As Long As You Can Hear Me,” about a fight-prone kid and the samurai ghost who protects him, fares somewhat better.

The real gem of the collection is the final story, “Without the Gods Seeing.” When Narasaki was in high school, he reacted harshly to a friend’s confession of love, and in the intervening ten years, has come to regret that he responded the way he did. When Wakakki, a handsome coworker, makes his own confession, Narasaki reacts more thoughtfully, taking the time to talk to Wakakki about his feelings and gaining new perspective on how much bravery is required to make such an admission to a friend.

It’s a really sweet story and Suzuki makes good use of her pages, painting Narasaki’s and Wakakki’s characters in quick strokes that define their personalities reasonably well. I absolutely love, for example, that it was Narasaki’s habit of feeding neighborhood kitties on his lunch break that caught Wakakki’s eye in the first place.

While a couple of the stories are disappointingly brief, on the whole this is an enjoyable collection, complemented by Suzuki’s unique artistic style. I’m not sure whether devotees of A Strange and Mystifying Story would find it to their liking, since it is quite different, but I’d personally rate it the better of the two.