The most recent manga giveaway at Experiments in Manga is currently underway, and there is still time to enter for an opportunity to win Nana, Volume 1 by Ai Yazawa. All you have to do is tell me whether or not you’ve ever given a manga a second chance and what your experience was. I also posted two reviews last week. The first was for the third and final volume of Off*Beat by Jen Lee Quick, which I was very happy with. Nearly ten years after the series first began, fans finally have a chance to read its conclusion thanks to the efforts of Chromatic Press. The second review last week was for Keigo Higashino’s most recently translated mystery novel, Malice. I enjoy Higashino’s work tremendously and was not at all disappointed with Malice. The novel will be released in October and is recommended for readers who enjoy smart, clever mysteries. Although it was from a couple of weeks ago, my Spotlight on Masaichi Mukaide has been making the rounds and gaining some attention. I worked pretty hard on it, so I’m extremely pleased that people are finding the post interesting.

Elsewhere online, Organization of Anti-Social Geniuses has an interview with Vertical’s Ed Chavez, discussing the success of Knights of Sidonia. And speaking of Vertical, the Fall 2014’s reader survey and license request form has been launched. Comics Alliance has an interesting interview with Felipe Smith (whose series Peepo Choo was published by Vertical). Yen Press announced some new light novel and manga licenses. And for your enjoyment, one of Kate Beaton’s recent Hark! A Vagrant comics focuses on Natsume Sōseki’s classic novel Kokoro. (I actually really like Kokoro and reviewed it a few years ago.)

Noragami: Stray God, Volume 1 by Adachitoka. Yato is a god of war that everyone has forgotten, or maybe never even knew about to being with. He has no temples or shrines, no followers or worshipers, but he’s determined to change all of that. Unfortunately, his personality leaves a bit to be desired and even his servants don’t like him; he’s had to resort to doing odd jobs and spreading his name (and number) by graffitiing the walls of bathroom stalls and alleyways. The beginning of Noragami: Stray God is somewhat uneven in tone, but by the end of the first volume it seems to have found a nice balance between the manga’s humor and the more serious aspects of the story. The introduction of the series’ other lead character–Hiyori, a human girl who has a little trouble with her spirit leaving her body after a near-death experience–helps to achieve this balance. She also happens to be a fan of professional wrestling, which actually comes into play in the story instead of just being a character quirk. I quite enjoyed the first volume of Noragami, finding it to be amusing and even a bit charming, and look forward to reading more of the series. 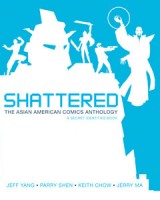 Shattered: The Asian American Comics Anthology edited by Jeff Yang, Parry Shen, Keith Chow, and Jerry Ma. The followup anthology to Secret Identities, Shattered collects forty-three short comics and pin-ups from seventy-five contributors. Whereas Secret Identities focused on superhero stories, Shattered also includes other genres of comics–fantasy, science fiction, martial arts, historical, contemporary fiction, and so on. The volume is intended to address and subvert five stereotypical representations of Asians and Asian-Americans in media: The Brute, The Temptress, The Brain, The Alien, and The Manipulator. Although there are some absolute gems in the collection–personal favorites include Tak Toyoshima’s “Occupy Ethnic Foods” and the precursor to Gene Luen Yang and Sonny Liew’s graphic novel The Shadow Hero–for me Shattered works better in concept than in execution. Many of the comics are either incomplete or feel as though they are pitches for a longer series instead of being finished works in their own right, making for a rather unsatisfying reading experience. However, I did appreciate the wide variety of comics and creators included in the volume.

Shinobu Kokoro: Hidden Heart by Temari Matsumoto. Way back when, Shinobu Kokoro: Hidden Heart was one of the first boys’ love manga that I ever read. Had it been my only exposure to the genre, I might have given up on boys’ love because I didn’t enjoy Shinobu Kokoro much at all. And honestly I still don’t, despite there being a few elements that I like. Actually, it might be some of those elements that hinder my enjoyment of the manga. Two of the three couples in Shinobu Kokoro are ninja. When handled well, I generally like ninja. Sadly, they’re not handled particularly well in Shinobu Kokoro, or at least not believably. Subaru is so incredibly naive, I’m not sure how he’s managed to survive. Also because of this, the unbalanced power dynamics in his relationship with the head ninja come across as disconcerting rather than romantic. And it’s surprising that the ninja clan has continued to exist at all since Hiiragi and Asagi find it appropriate to take time to have sex while in the middle of an escape from a difficult mission. The third set of stories is about snow spirits, but I’ve since read better snow spirit stories, too. There is some nice artwork here and there, but overall I wasn’t especially impressed by Shinobu Kokoro.