Samurai 8: The Tale of Hachimaru Vol 1 by Masashi Kishimoto and Akira Okubo

Samurai 8 is a retro futuristic manga that mashes up The Last Starfighter with Samurai tropes, with very detailed art and maybe a little bit too much exposition in the first volume. The art is incredibly detailed, and I’m hoping a more coherent story emerges in the second volume since the exposition will be out of the way.

The volume opens with a futuristic battle between questing samurai, and some of the story elements resemble a video game… because it is. Hachimaru is a sickly child who is kept alive due to the inventions of his father, but takes refuge in gaming. He isn’t able to go outside at all, but this situation is quickly resolved when a Samurai in the shape of daruma appears and asks Hachimaru if he has heroism within him. Daruma announces that he’s seeded the video game throughout the galaxy in order to find young people with potential. In just a few panels, Hachimaru’s father is fending off a band of ronin, Hachimaru undergoes a bodily transformation and becomes a samurai, and Daruma takes him on as a new pupil. 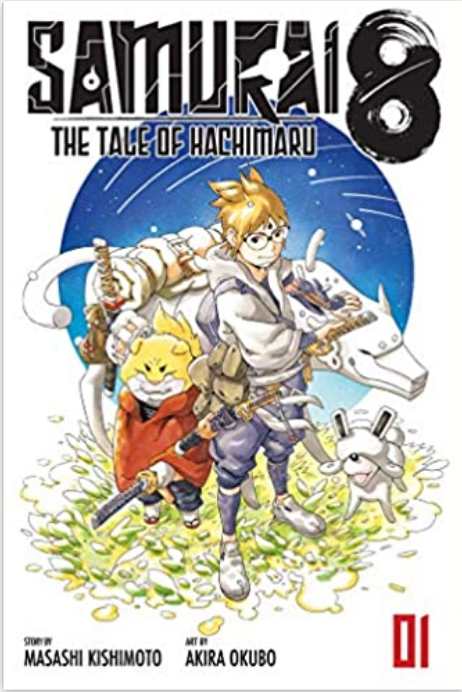 The art is incredibly detailed and many of the futuristic landscapes are stunning. There are so many floating armor plates hovering around the characters, it made the action scenes a bit difficult to follow for me, just because I wasn’t sure where my eyes should go. There’s a lot of potential with this series, but I think both the story and art needed a bit more room to breathe. My kids read this manga and liked it, but thought it was “too fast.” I’m hoping that things settle down a little bit in the next volume, because there is plenty of potential here.