So it me a while to figure out which Lai An (aka Ryan) manhua I wanted to talk about this week, but as soon as I re-read Angel Hair, I realized that this was the one.

A couple of travellers visit the grave of an angel somewhere in Italy. The travellers exchange the stories they have heard about the angel’s death. Then a stranger comes and tells them his version of the story. 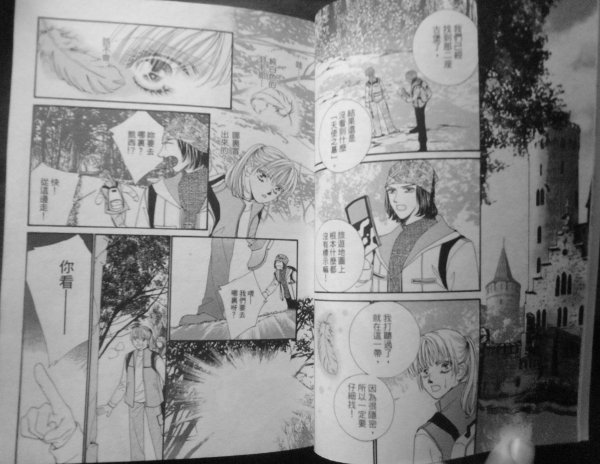 The travellers find the tomb.

This manhua is mainly a collection of three stories about an angel called Nathaniel and how he died. The three stories all feature characters with the same names, and has some common element (for example, each story features hair turning from black to blond or from blond to black, and all three stories are set during the Italian Renaissance), and of course, each story ends with the death of the angel Nathaniel, but otherwise they are different stories.

Sometimes her name is written in English as ‘Lai An’ and sometimes as ‘Ryan’.

Though there are other magazines which have published Taiwanese manhua aimed at a female audience, Star Girls is, as far as I know, the only magazine to have ever focused on Taiwanese manhua aimed at a female audience. When Star Girls debuted in the 1990s, when Taiwan was transitioning to democracy and aspiring manhua artists suddenly had a lot more freedom (technically, the Taiwanese manhua revival started in the late 1980s, but whatever) this magazine served as a venue for many brand new artists inspired by Japanese shojo manga. Based of what I’ve seen of the 90s material, much of it was dreck. However, it was in the 1990s that Yi Huan (who I’ve discussed before), Nicky Lee (who I’ve also discussed before), and Lai An got their start in Star Girls, and became Star Girls’ three most popular artists. All three of them are still producing shojo-inspired manhua.

Now, Star Girls has a much smaller group of artists than the 1990s, and it’s much harder for new talent to break in since the magazine editors apparently favor talent which has already proven successful. However, my impression (granted, this might be skewed by the samples I’ve encountered) is that the overall quality of the magazine is higher now than in the 1990s.

Anyway, as far as I know, Yi Huan, Nicky Lee, and Lai An are the only Star Girls’ artists who have ever published their own artbooks (please correct me if this information is wrong).

This manhua is a collection of three stories published in Star Girls magazine in the late 90s.

Since Star Girls is modelled after Japanese shojo magazines, all of its manhua are heavily influenced by Japanese shojo manga … but some are only heavily influenced, for example the work of Yi Huan, and some are so heavily influenced that I can’t stop myself from comparing it to extremely similar Japanese material, for example the work of Nicky Lee. Lai An also falls into the latter category. Her art style in the 1990s is basically just like the dominant shojo art styles of the 90s, and her current art is much like current shojo art.

The thing is, I love 90s shojo art. I dislike current shojo art, which is one reason I don’t read much current shojo (and what I do read of the current stuff, such as 7Seeds, tends to have a retro art style).

As it so happens, I love Lai An’s early art, but I don’t love her current art. I think it is partially because she is following contemporary Japanese styles. Yet I don’t think that completely explains it.

Here are some pages from an early Lai An manhua, The Royal: 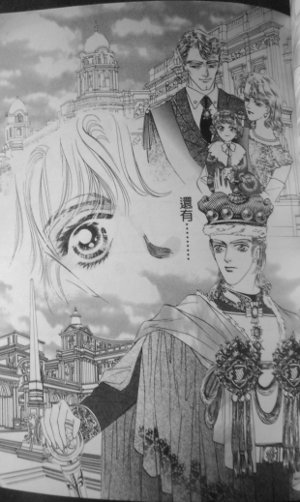 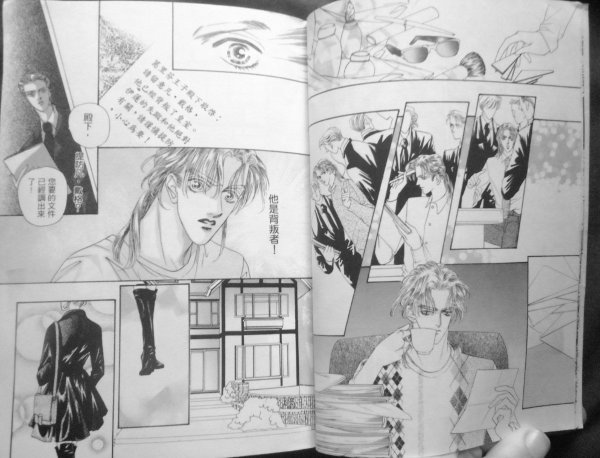 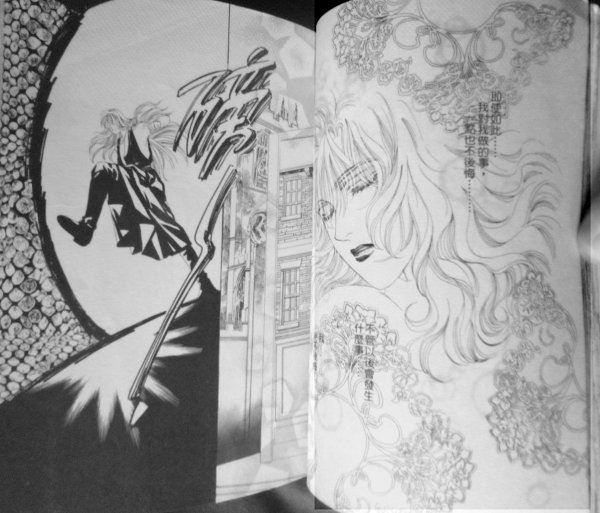 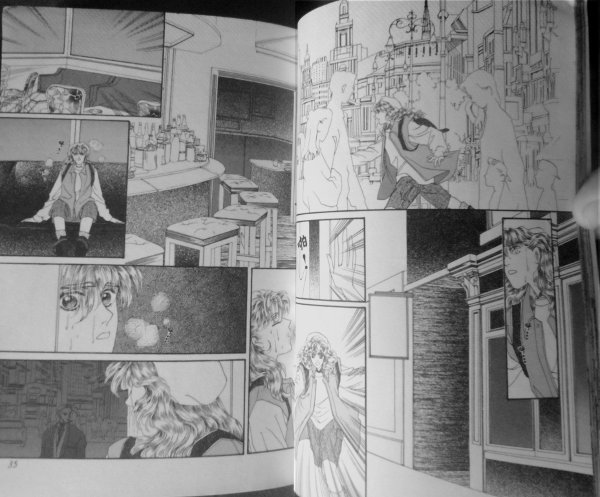 First of all, I love the 90s style, in fact, it even seems to hark back to glorious 70s shojo (I can tell that many Star Girls artists love 70s shojo). There is an abundance of wavy lines, a jewel-like beauty, as well as the daring emotionally charged panel compositions which I love to see in shojo manga.

These are some pages from Lai An’s currently running manhua, Close to You: 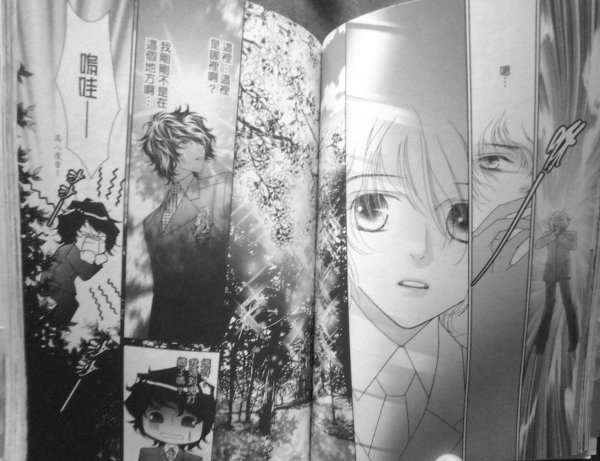 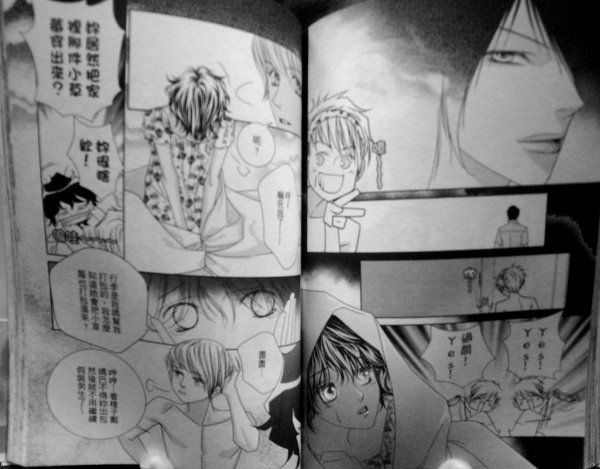 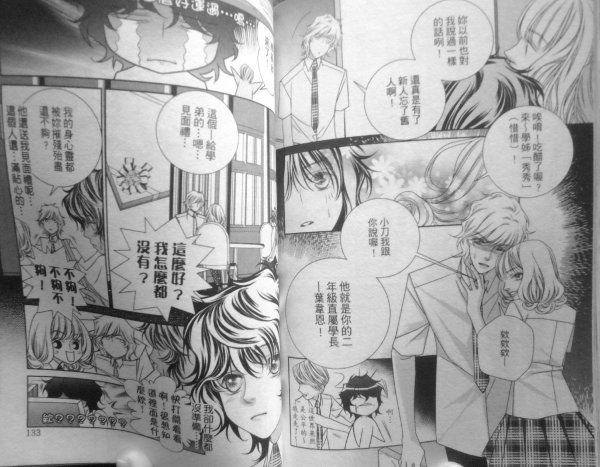 Okay, the art’s not bad. Actually, it’s good. It’s even more anatomically accurate. It looks the work of a more mature artist. But, to me, it lacks the creative energy of her early artwork. It doesn’t make me pause so I can let the art penetrate my eyes. And I don’t think this can simply be attributed to a change in vogue.

Anyway, maybe I should start talking about…

The Art in Angel Hair 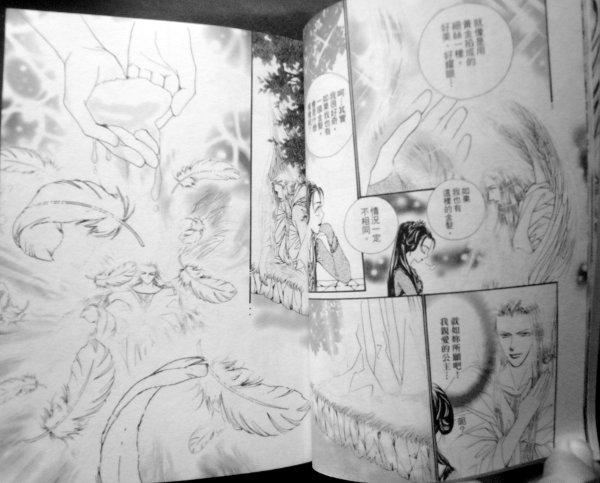 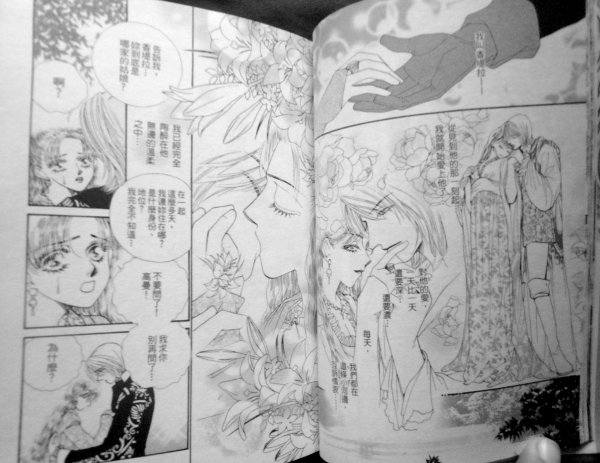 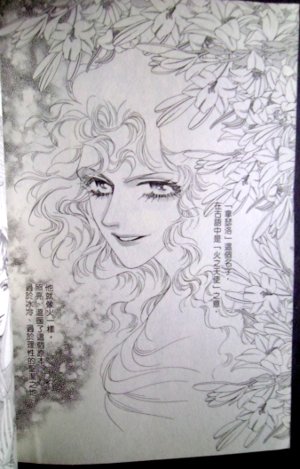 About the only thing it would need to become even more like 70s shojo manga art is the sparkles, but that’s okay, I think the flowers and the expressive use of panels are better than sparkles.

And of course, girly art which does not constantly burst into flowers can also be wonderful too, but hey, I heartily approve of girly comic books which burst out into flowers.

It should be apparent by now that Angel Hair is a work from Lai An’s early period, in other words, from when her art was actually beautiful instead of merely being good.

In order for complex panel compositions to work, there need to be simple compositions to balance them out, and in fact, these simpler compositions will often have the greatest impact because they can be understood the most immediately. Lai An includes a sufficient number of single-panel or otherwise simple pages as well. Of course, when the panel composition is simple, there needs to be a compelling subject. Lai An takes care of this too. 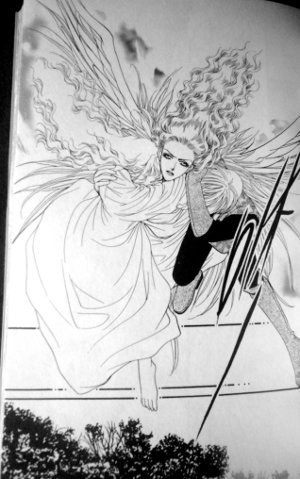 And of course, her characters can be very expressive, and not just in a melodramatic way. 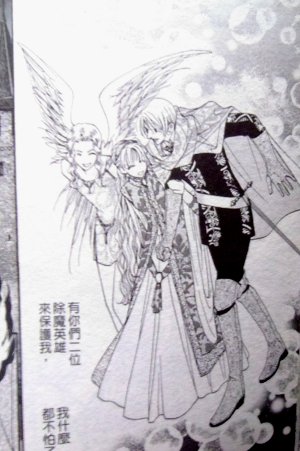 However, I think my favorite thing about the artwork is the use of contrast. Most of this manhua is very light, colorwise – lots of white space between the lines, not too much screentone, etc. 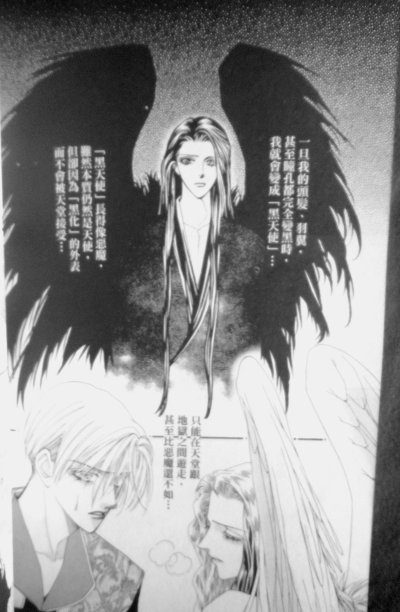 That means when black space is used, it really stands out. These are some of my favorite images, but partially because they contrast with the overall light-levels of the manhua as a whole – in isolation, they would not be so striking. 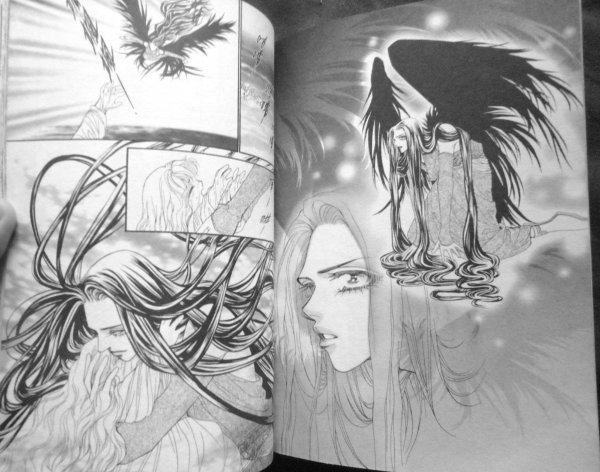 And it supports the stories. All of the stories include as a plot element blond hair vs. black hair. In all of the stories, blond hair represents goodness, purity, and beauty … as well hypocrisy and deceit, whereas black hair represents evil, pollution, and ugliness … as well as truth and integrity. By keeping most of the art looking light, the dark parts truly feel heavy, serious, and like a stain on the appearance.

This is an opportunity to talk about…

All three stories are fairy-tale like, of course. And we all know what a fairy-tale should feel like. And that’s why the first two stories feel wrong.

In the first story, for example, (spoiler warning) the princess kills the angel to get his hair so her hair would be blond forever and she could win the love of the prince. The innocent angel dies and the princess marries the prince and lives happily ever after.

Lai An said she got a lot of complaints about this story when it first ran in Star Girls magazine. It flies in the face of the ‘just world hypothesis’ (which, strangely, I have discussed before) and fairy tales just don’t work like that.

The second story also feels unsatisfying, though I don’t want to spoil that one.

However, the point is that these first two stories are supposed to feel false. Lai An says that she didn’t know whether to be pleased or disappointed by the magazine readers’ reactions. That is so that, when the third story is told, the reader will feel that the third story is the true story of how the angel died (and I am definitely don’t want to spoil that one).

The mere fact that the first two stories are, essentially, false, demonstrates that one shouldn’t trust everything one hears.

I think I hinted at the moral of the three stories while I was talking about the art. Basically, the message is “don’t judge people based on their appearances.” Or perhaps more broadly, “do what you feel is just, not what other people say you should do.”

All in all, I think the stories, collectively, work quite well.

There is no legal way to read this manhua in English. That’s too bad. It’s only one volume long, so I can’t imagine that it would be too much of a financial risk to license and publish this (digitally, or even on paper) in English.

To be honest, I am not a Lai An fan. But this specific manhua is an exception. It was among the first manhua I ever read, and it left an impression on me. It uses the story structure expertly to make its point. And I am most definitely a sucker for the artwork.

Last week, Sara K. attended the “Global Sinophonia” conference at Academia Sinica. Though she was just an observer, she had never been to an academic conference before, and in some ways she thought getting a peek at that world was more interesting than the presentations themselves. Of course, some of the presentations were very interesting, and will no doubt have their influence on this column. It was also the first time she ever identified herself as a blogger in the offline world (hey, what was she supposed to say when people asked her “what university are you affiliated with” or “what do you research”?) Sara K. is very grateful to Yen Yen Woo and Colin Goh of Dim Sum Warriors for inviting her. Speaking of that, you can now admire the technological marvel of a 3-year old reading a bilingual comic on an iPad.