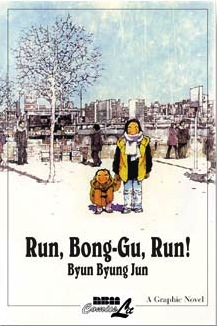 Here’s an excerpt from our discussion:

MICHELLE: How about with Run, Bong-Gu, Run! by Byun Byung-Jun? I’ve spent a lot of time thinking about this one since I finished it. For those who aren’t familiar with it, this is a simple story of a boy and his mother who travel from a seaside town to Seoul in search of the father/husband who went to the city in search of work and who hasn’t been heard from in some time. While there, they meet a kindly old man and his granddaughter, rescue a bird from a building, and bemoan the difficulties of life in the city.

While low on plot, Run, Bong-Gu, Run is high on atmosphere, with a dreamy yet deliberate way of portraying the actions of our protagonists as opposed to the near faceless mob of Seoul-ites who go whizzing past them. Our smalltown heroes have not lost the ability to see others in pain, be they homeless humans or endangered pigeons. They manage to do a fair amount of good on their visit simply by noticing those around them and providing what help they can offer.

MELINDA: It’s true there isn’t much to the plot of this little manhwa, and for me that’s definitely part of its charm. I love the simplicity of the story and its characters, and Byun’s manner of presenting them. I like, too, that it’s not just the smalltown visitors doing good, either.

The old man they meet there is as kind and helpful as they are, and obviously has been helping out the woman’s husband while he’s been in the city. There’s this big, faceless city, but once you get down to the individuals, they are just people like anyone else, and I love that about this story. I think it’s significant that the old man is first seen in the story panhandling on the subway. That person–a begger on the subway–is the easiest for most of us to brush off in our lives as someone on the outskirts of our own experience. Yet he turns up later as a fully-realized character.

In a way, Byun portrays Seoul exactly as I think of big cities in general. They can seem intimidating–as though they might swallow your individuality whole–but when you really spend time in one, maybe even live in it, you realize that a neighborhood is a neighborhood, no matter where you live in the world. A city is just a dense collection of small towns with no official dividers between them.

I like your description of the atmosphere as “dreamy yet deliberate.” That’s the perfect way to describe Byun’s artwork and writing style. And it’s nice to see it used for a warm, simple story like this one. Run, Bong-Gu, Run! lacks the sheer bleakness of Byun’s melancholy anthology, Mijeong, and though some of those stories perhaps have more to them, this one is much more soothing for the soul.