The premise of this manga – penguins who happen to run a cafe where they are all very buff men wearing tuxedos – seemed so ridiculous I couldn’t help wanting to check it out. This single volume manga certainly gets the deluxe treatment, with a hardcover edition and plenty of color pages. Now and then I really enjoy a didactic manga, and that’s what Ueno delivers. I was a little disappointed that there wasn’t more of a storyline focusing on penguin cafe work, because I enjoy a good food manga as well, but for readers who want to dramatically up their knowledge of penguin behavior, species variants, and random facts about penguin habitats this is the book for you! 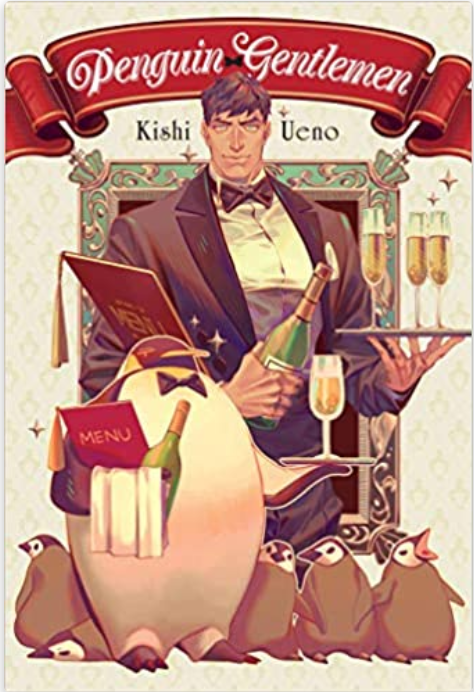 The character designs are one of the most amusing aspects of the book, as Ueno showcases differences in penguin markings and size into the hair styles and tuxedo uniforms of all the waiters. The main boss of the cafe is the King penguin, who is dwarfed in size by the stoic Emperor penguin who looms over everyone. The penguin gentlemen discuss their characteristics in the setting of the cafe, with plenty of comedic bits. The characters switch back and forth often between their anthropomorphic human forms and their natural states as penguins, but Ueno is great at rendering the heightened emotions of the characters even when they are in bird form. I read this book in several sittings, simply because I was not able to absorb all the information about penguin egg hatching, body language, and markings without a break here and there. The last section of the book that focuses on penguin courtship rituals is particularly hilarious. If someone wants to learn many scientific facts about penguins and be entertained along the way, Penguin Gentlemen certainly delivers.