Last week at Experiments in Manga I posted May’s Bookshelf Overload. Largely in part due to my trip to TCAF and the generosity of Kodansha Comics, I ended up with a lot of comics and manga to add to my shelves in May. I was actually out of the state traveling for work for most of the week, but while I was gone I did manage to post an in-depth review of Yui Sakuma’s Complex Age, Volume 1 which is scheduled to be released later this month. I was completely taken by surprise by how strongly the manga resonated with me.

As for some of the interesting reading that I came across online last week: Kodansha Comics’ most recent creator spotlight, which includes links to interviews, videos, and more, focuses on Yoshitoki Oima. ICv2 interviewed Stu Levy about Tokyopop’s return to print publishing. At The OASG, Jenny McKeon shared part of her story about becoming a manga translator in comic form. Also, the most recent installment of The Sparkling World of 1970s Shojo Manga highlights Keiko Takemiya and her work.

Kiss Him, Not Me!, Volumes 3-4 by Junko. I can’t help it. I do have some reservations about the occasional emphasis placed on Serinuma’s weight (although it does reflect more poorly on the other characters than it does on Serinuma herself), but Kiss Him, Not Me! honestly makes me grin. The story is ridiculous and over-the-top, as are Junko’s illustrations. The characters’ facial expressions and extreme reactions can be pretty spectacular. But there’s also some legitimate character development in the series to go along with the comedy. At times it can even be quite touching. One of the things that makes Kiss Him, Not Me! particularly refreshing is that although Serinuma is basically dealing with a reverse-harem situation, she doesn’t really have any sort of romantic interest in any of the other characters. Like the title suggests, she’d much rather her fujoshi fantasies be indulged. But at this point she does care a great deal about them all as friends, and she makes a great friend even if her suitors would like something more. The four boys and now also the one girl (who is a fantastic addition to the series) are slowly changing for the better and are becoming better people simply by knowing her.

Orange, Omnibus 2 by Ichigo Takano. The first manga to really floor me this year was the debut of Orange. I was a little worried how the second half of the series would turn out, but Takano handles the story very well, finding a good balance between hopefulness and bittersweetness. Orange is a series that deals very frankly, realistically, and powerfully with heavy subject matter like depression and suicide. Takano captures extraordinarily well what it can be like to have depression and how extremely difficult it can be not only for that person but for their loved ones as well. Orange recognizes that issues surrounding mental health are complicated and simple fixes don’t really exist. The manga is not always an easy read—honestly, it can be devastating and I’ll admit to reading through tears on multiple occasions—but it most definitely is a worthwhile series. The second omnibus is filled out by one of Takano’s earlier manga Haruiro Astronaut, a romantic comedy which plays around with shoujo tropes. After the hard-hitting emotional drama of Orange, Haruiro Astronaut comes across as a little frivolous, but it’s enjoyable and in the end I rather liked it’s goofiness.

Paradise Residence, Volume 2 by Kosuke Fujishima. I’m a little surprised by how much I’m enjoying Paradise Residence. Perhaps it’s because the series reminds me of some of the better parts of living in a dormitory and leaves me feeling a bit nostalgic for my college days. (Paradise Residence is about an all-girls high school, though, so the experience isn’t quite the same.) I was particularly fond of the chapter in the second volume in which everyone shows off their culinary skills and creations using low-budget ingredients and super-simple cooking techniques. (Actual recipes are included in the volume as well, which is a nice touch.) Paradise Residence is a fairly low-key comedy that relies more on the charming nature of its cast rather than on over-the-top humor, although sometimes the manga can be pretty ridiculous. The characters are generally likeable and their interactions are entertaining, providing much of the series’ appeal. However, their characterization does come across as somewhat shallow; some of the girls seem to be little more than a “type” or are stuck with a single gag instead being allowed to be fully-realized characters.

I posted a few different things at Experiments in Manga last week. For starters, the Love at Fourteen Giveaway Winner was announced. The post also includes a list of some of the manga available in English which feature a bit of romance. Last week I also reviewed Tokyo Decadence: 15 Stories by Ryu Murakami which in some ways is about love, or at least lust. Due to be published later this year, the collection is engaging but definitely not for everyone as some of the stories are quite disturbing. Over the weekend January’s Bookshelf Overload was posted for those of you curious about what made it onto my shelves last month. I also had a taiko gig over the weekend that took up a fair amount of time. As a result of that and other some other life stress, I’ve fallen a bit behind on my writing (just when I thought I’d finally gotten ahead!), so there’ll likely only be one review coming this week instead of the two that were originally planned.

Orange, Omnibus 1 by Ichigo Takano. I had heard very good things about Orange and so was greatly looking forward to reading the manga, but I honestly didn’t anticipate that the series might become one of my favorite releases of the year. (It all depends on exactly how the story plays out in the second and final omnibus.) Orange sensitively deals with some fairly heavy subject matter, including suicide and crippling regret, but at the same time the manga also has a lighter sweetness to it. The manga is both heartwrenching and heartwarming, a melancholic story about close relationships and human connection. Admittedly, Naho is incredibly dense when it comes to recognizing other people’s feelings for her, even when they basically come right out and tell her, which can be a bit exasperating. But overall, the feelings and emotions in Orange ring true, especially as the series progresses and it’s revealed just why everyone is behaving in the ways that they are. I can see Orange ending either in tragedy or in happiness and I’m very curious to see which it will be.

Prison School, Omnibus 2 by Akira Hiramoto. The first omnibus of Prison School established the manga as a series that is simultaneously appalling and strangely engaging. This of course assumes that readers aren’t immediately offended by its highly sexualized and incredibly vulgar nature to begin with. Prison School is definitely not a series for everyone even if, surprisingly, it has its sweet moments. The second omnibus very much continues in the same vein, so the initial shock caused by the manga’s obscenity, over-the-top fanservice, and ridiculous premise has diminished some. Even so, Prison School is a page-turner. The series has been building up to Kiyoshi’s escape attempt, resulting in a situation that gets progressively worse as time goes by. Seeing just how bad things can possibly get (which is pretty bad) is one of Prison School‘s major draws. That and Hiramoto’s impressive skills as an artist. The manga’s content will certainly not be to everyone’s taste, but it’s hard to deny Hiramoto’s talent. 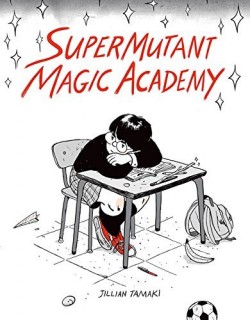