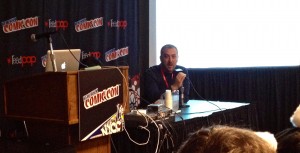 First off in new licenses, to Manga Bookshelf’s delight, is Void’s Enigmatic Mansion, a new manhwa series with artwork by HeeEun Kim and story by JiEun Ha. This series will be serialized digitally, chapter-to-chapter on a simultaneous schedule with Korea, with eventual print releases as well.

Next, Yen will be offering Ani-Imo by Haruko Kurumatani, which promises body-swapping and inappropriate sibling affection, so be sure to check it out if that’s your thing. And if that’s not quite my thing, paranormal shoujo romance absolutely is, which brings us to He’s My Only Vampire by Aya Shouoto. I’ll admit I’m somewhat iffy on vampires these days, but I suspect I’ll risk it.

In the interest of saving the best for last, I’ll skip now to Alice in the Country of Diamonds ~ Wonderful Wonder World ~ Official Visual Fan Book, created by QuinRose, which is sure to please fans of the Alice series. And moving then to High School DxD (story by Ichiei Ishibumi, art by Hiroji Mishima), which Hassler introduced by asking “Who likes boobs?” (I sadly heard “Who likes booze?,” so I couldn’t help but be a disappointed by the result.) 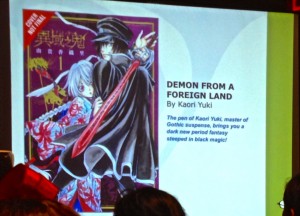 Did I mention I was saving the best for last? How about Kaori Yuki’s Demon from a Foreign Land? This, unsurprisingly, looks to be a dark supernatural romance, enhanced by Yuki’s always-delicious artwork. Yen is “super-excited about this one!” and they’re proving that by giving the series hardcover treatment. I’m feeling pretty excited as well.

After speeding through their license announcements, the Yen crew answered questions from the crowd.

When asked about the importance of digital releases, Hassler responded, “Digital is doing fine—digital is growing,” but qualified that by adding that, “it is still a very small part of our business, as it is with everyone … the reality is for pretty much every publisher here, print is still 90% of our business.” He punctuated this point by claiming that the Yen staff spends time burying their faces in new print books and getting “high on glue.” 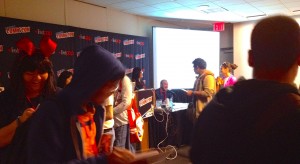 Fans of digital have good news on the horizon, however, as Hassler confirmed that they “absolutely” are going to be acquiring digital rights for their Square Enix titles, now that the Japanese publisher’s online reader is finally being pulled down. “We’re just finalizing the details,” he said.”Keep your ears open, we’ll have announcements for you soon.” Even better, these titles will be available worldwide.

Hassler also reinforced the company’s dedication to their light novel releases, dismissing industry claims that light novels “don’t work” in North America. “I am hugely enthusiastic about the light novel business, they have been very successful for us.”

Yen’s panel closed with a book giveaway for all the attendees, passing on the panelists’ jovial mood to the entire room. 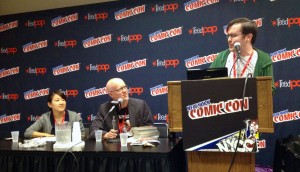 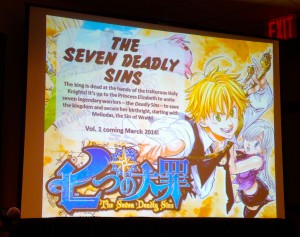 Here are a few shots of the crowds on the exhibit floor today. Thursday’s starting to get pretty popular…