The most recent manga giveaway at Experiments in Manga was posted last week. This month everyone participating has a chance to win Anonymous Noise, Volume 1 by Ryoko Fukuyama. The winner will be announced on Wednesday, so there’s still time to enter. Simply tell me about your favorite singer or vocalist from a manga! In other giveaway news, Taneeka Stotts is sponsoring a tremendous Queer Comics Giveaway for Pride Month. I’ve read and/or own a fair number of the comics in the giveaway and they’re all great. Even if you don’t enter or win, the list itself is still well-worth checking out!

As for other interesting things that I’ve recently come across online: Terry Hong (creator of the Smithsonian Asian Pacific American Center’s BookDragon review blog, which I greatly enjoy) compiled a list of fourteen Japanese thrillers for The Booklist Reader which includes both novels and manga. (I’ve read most of the books on the list and they’re great; here are my in-depth reviews of some of the titles mentioned: The Devotion of Suspect X, Malice, and Salvation of a Saint by Keigo Higashino, The Kurosagi Corpse Delivery Service by Eiji Otsuka and Housui Yamazaki, and Nijigahara Holograph by Inio Asano.) Matt Thorn has re-posted an old article from The Comics Journal on The Magnificent Forty-Niners. Also, my Manga Bookshelf cohort Brigid Alverson is now writing for ICv2 as well. Her first post is a roundup of recent manga news. 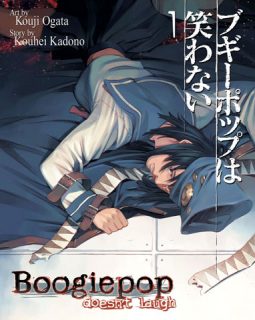 Boogiepop Doesn’t Laugh, Volumes 1-2 written by Kouhei Kadono and illustrated by Kouji Ogata. The Boogiepop franchise began as a series of light novels but would eventually expand to include music, a live-action film, an anime, and two short manga series among other things. Boogiepop Doesn’t Laugh is actually the second of the two manga series to be released but it’s an adaptation of Boogiepop and Others, the very first Boogiepop light novel. Although the manga does include a few additional scenes, for the most part it’s a very close adaptation. Like the original novel, the narrative of Boogiepop Doesn’t Laugh is deliberately fragmented–the supernatural mysteries surrounding the serial disappearances of a number of high school girls are explored through multiple perspectives taken from before, after, and during the events. Sadly, the technique isn’t nearly as effective in the manga as it was in the novel and the adaptation never quite reaches the same depth as the original, but the story remains and interesting and curious one. Perhaps obviously what makes the manga stand apart from its predecessor is its artwork. The first quarter or so of the series isn’t especially impressive, but then Ogata switches to a style reminiscent of ink wash paintings which is quite lovely.

Persona 3, Volumes 1-3 by Shuji Sogabe. Having read and largely enjoyed what has so far been translated of Sogabe’s Persona 4 manga adaptation, I was looking forward to giving the Persona 3 manga a try as well. (Especially as I’ve actually played some of Persona 3, unlike Persona 4. Granted, I still haven’t actually finished the video game.) I really wanted to like the manga, but I was very disappointed with the first three volumes of Sogabe’s Persona 3. Apparently, it was Sogabe’s first professional manga, which may explain some of the series problems. The Persona 3 manga will likely work best for readers who are already very familiar with the original, and even then I suspect that most would rather just play the game again. The manga has no clear or coherent narrative to it, jumping around in the story and in an out of battles without reason. Considering the number of fight sequences included, it’s particularly unfortunate that conveying action is one of Sogabe’s weakest areas. Characterization is largely lacking in the manga and most of the cast members are never fully or adequately introduced, but at least their designs are attractive enough. Overall, I didn’t enjoy the Persona 3 manga much at all, mostly because it didn’t make much sense at all. Some of the more comedic moments were admittedly amusing, though.

To the Abandoned Sacred Beasts, Volumes 1-2 by Maybe. Before reading To the Abandoned Sacred Beasts I was under the impression that the series used the American Civil War as the foundation of its story. It turns out that’s not really the case, although the worldbuilding and character designs take obvious inspiration from nineteenth-century United States and the setting of the manga is a country recovering from a great war between the North and the South. (I suppose To the Abandoned Sacred Beasts could be some sort of alternative historical fantasy, but for the moment at least it doesn’t read that way to me.) In order to emerge victorious from the war, the North relied on soldiers known as Incarnates–humans who were granted tremendous abilities and battle prowess but at a great cost; they were literally turned into monsters. The metaphor may not be particularly subtle, but how To the Abandoned Sacred Beasts tackles the psychological ramifications and ravages of war is certainly engaging. Now that the conflict is over and an uneasy peace has been established, there is no longer any need for creatures of war and the Incarnate soldiers largely find themselves feared and despised. As the last of their humanity slips from their grasp, the Incarnates ultimately become the targets of the Beast Hunters.