The English title of this drama is “Love in the Rain,” but I will henceforth use the Mandarin title, Yanyu Mengmeng, which roughly means “The Misty Rain is Hazy.” It’s more poetic.

In this scene, Erhao brings his girlfriend, Fang Yu, to meet his “warm and loving” family for the first time. I have translated the dialogue to the best of my ability, but I think some of liveliness has been lost. 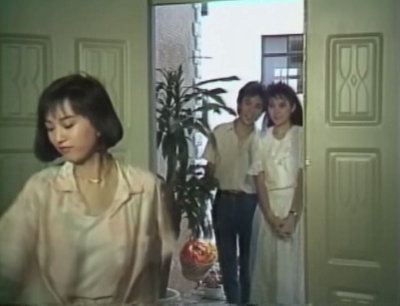 Erhao: This is … hey, Mengping! Could you shut off the record player? Show a little respect for your brother.

Mengping: Hey, you sure have guts to hang out with a guy like my brother. Don’t you know how many girlfriends he’s had? The last one… 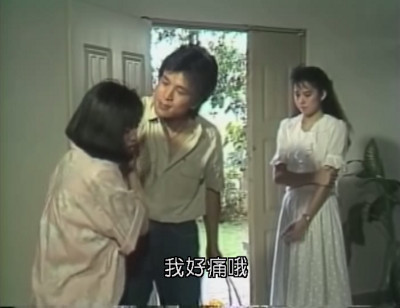 Erhao: Pay no attention to my sister. She loves to make up rumors and stir things up.

Mengping: Erhao, you don’t care about anything other than chasing girls! Erhao! 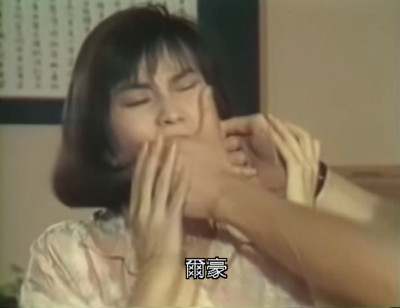 Mengping: Even before you’ve married her, you’re already bullying your little sister!

Erhao: What are you saying!

Mengping: Ma, save me! 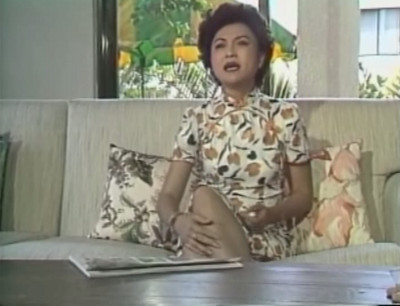 Xueqin (the mother): Aya, you’re all going to be the death of me. It’s always yelling all the time.

Erhao: Ma, this my girlfriend, Fang Yu. I’ve mentioned her before. 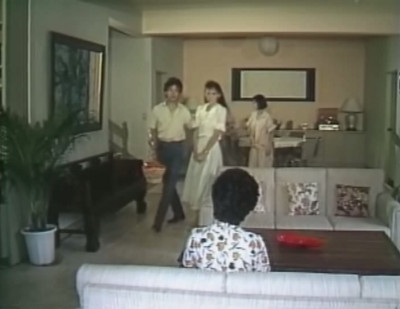 Fang Yu: (using very polite language) Erhao has said a lot about you. I should have met you earlier.

Xueqin: So you’re Fang Yu. You look very nice. No wonder my son fell in love. How old are you? 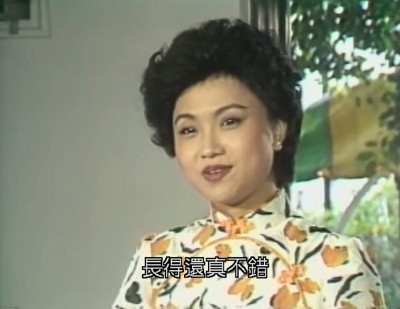 Xueqin: Ruping! I want you to take a good look at Fang Yu.

Ruping: Ma, I’m looking at her. 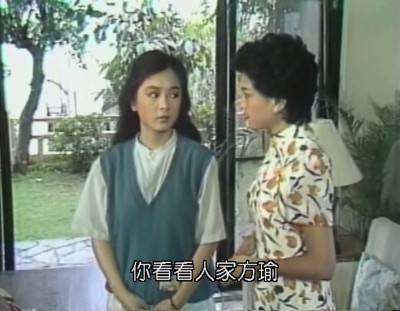 Xueqin: Look at her … her eyebrows … her eyes … she’s dressed herself up very nicely. Her waist, her figure, she doesn’t look at all like your sloppy appearance. So she has a boyfriend. Ruping, you’re also 20 years old. Why do you spend all day alone in your room? You really are stupid. 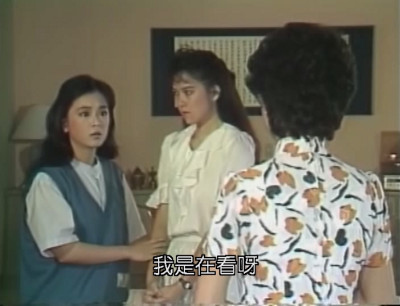 Erhao: Fang Yu, my mother is praising you.

Fang Yu: So, we’re the same age! Erhao often says that he has a sweet and warm-hearted sister. He certainly means you. Ruping, we’ll surely become good friends.

Xueqin: Ayo, this little mouth knows its sweet talk. No wonder she’s won little Erhao’s heart. Ruping, you should learn how to be like her. 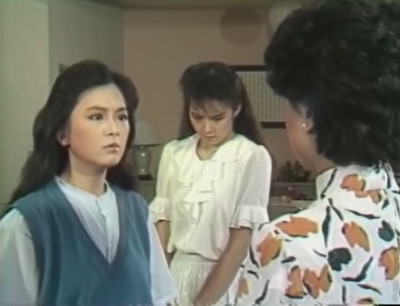 Ruping: But if you want to reprimand me, please reprimand me behind closed doors. This is Fangyu’s first time visiting our home. Please let me have the tiniest bit of dignity, and show Fangyu a little respect, and show Erhao a little respect. Criticizing me in such a heartless way, letting other people see it … why! Why! [Ruping runs up the stairs in tears]

Mengping: Wow, Ruping has a spine after all. I want to call out “Long Live Ruping” three times. She’s finally grown up. 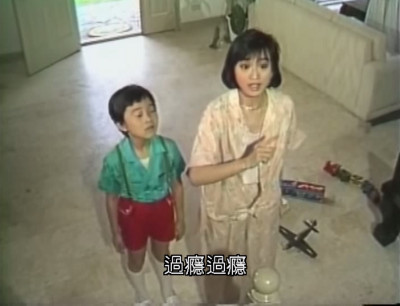 Xueqin: What kind of world is this? Do you children have the slightest regard for your mother? Even Ruping is talking back to me. I’ve lived in vain. I’m going to drag that girl down here and get a straight answer about what the hell is going on! 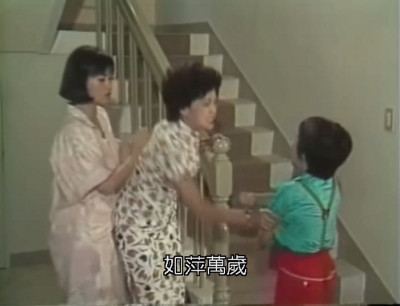 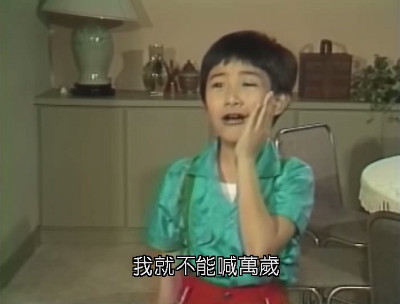 Xueqin: Don’t call for Papa. If you continue…

Zhenhua (Father): What is everybody fighting over! You don’t even let me have a few minutes of peace! What nonsense. 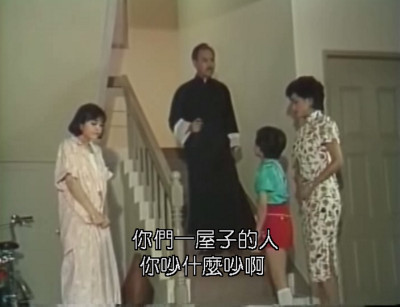 Zhenhua: Erjie, come here. [Erjie comes over]. Sit down. Where were you hit? 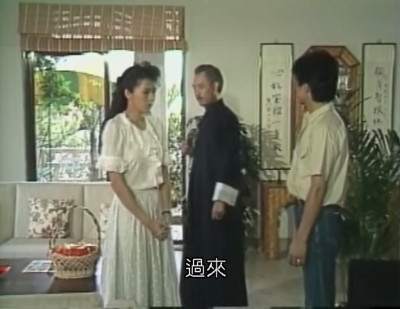 Fangyu: Bo… bo… bofu [in Mandarin, ‘bofu’ is a polite way to address an older man with whom one has a personal relationship, for example, your boyfriend’s father]

Erjie: What “bo-bo-bo”? It’s “bo-po-mo-fo” [this is a reference to how Taiwanese children learn how to read]. 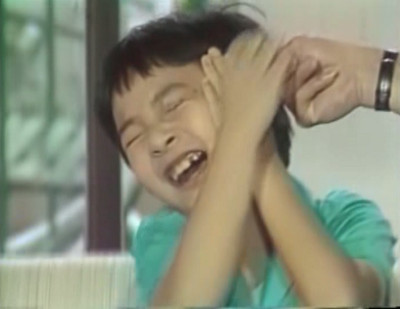 Zhenhua: Erhao, how dare you! You bring your girlfriend how, and then turn this house upside down! Erhao! Let go!

Erjie: Then there’s yuan, yuan, yuan [this is a reference to the word “fangyuan,” which means “circumference”] 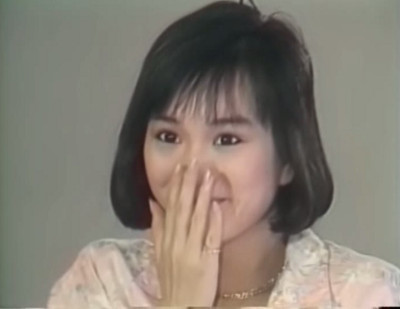 Zhenhua: Ah, how did you meet Erhao. 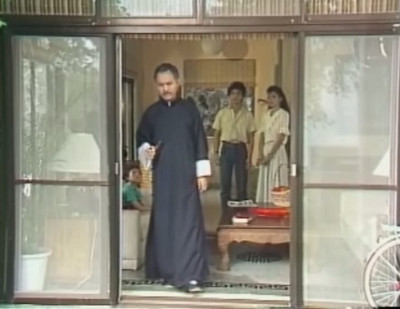 Zhenhua: So you’re Yiping’s classmate? Excellent! Of all of my children, Yiping has the strongest personality and temper. She’s resilient and stubborn, proud and sharp. Every word she says is just like a razor blade. What a pity she was born in these times, and born as a girl. After that fight, I don’t know when she’ll ever come back. It’s all my fault. I shouldn’t have hit her.

So, that’s the Lu family. Now it’s time for a song! Notice how much grabbing/hitting/pushing there is (even some of the kissing looks violent):

This TV series is adapted from the novel by Chiung Yao, who I’ve discussed before, first published in 1964. Chiung Yao also wrote the script for the TV show, had some say in the casting of the actors, and even wrote the lyrics for the songs, so I also consider the TV Drama to be one of her direct artistic works. Between the writing of the novel and the production of this TV drama, Chiung Yao had more than 20 years to grow and change as a writer, and I consider this drama to be a re-write of the story reflecting that change.

It’s one of the most popular Taiwanese dramas of the 1980s, and these Chiung Yao dramas have a strong influence on Taiwanese idol dramas. 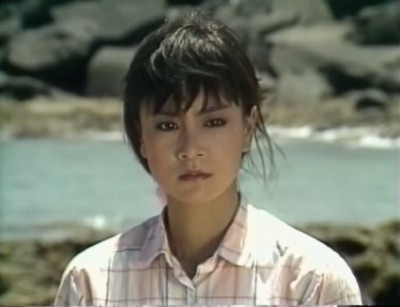 Can you stare down Leanne Liu? 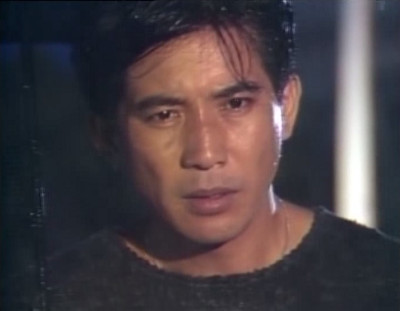 He Shuhuan. He is a close friend of Lu Erhao and, at the beginning of the story, Lu Ruping’s potential new boyfriend. One day, when he was going to visit the Lu family, he sees a young woman outside in the pouring rain, with visible injuries and no umbrella. She refuses to report anything to the police, but agrees to let He Shuhuan take her to his apartment so she can clean herself up. When she finds out that she is a “friend” of the Lu family, she refuses to have anything more to do with him, and runs out.

Shuhuan is incredibly curious about this young woman. Erhao at first says he knows nothing, but then they encounter this young woman at a dance club, where it’s clear that she and Erhao have some kind of personal relationship, though Erhao insists that she is not his girlfriend. Eventually, Shuhuan finds out that the mysterious, proud young woman is none other than… 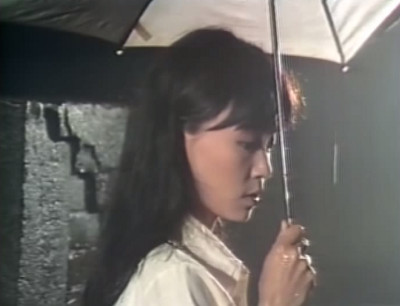 Lu Yiping. The heroine (or anti-heroine). The novel is written in first person from her perspective. She is the half-sister of Erhao / Ruping / Mengping et al. Her father had driven her mother and herself out ten years ago, and since then they had been living from hand to mouth on what little money he would deign to give them. Yiping would personally have to go to “that place” to beg her father for money.

When they are several months behind on rent, there isn’t enough money for food, her mother needs to see a doctor, and Yiping needs new shoes, she once again goes to “that place.” While Ruping has a nice dog and an expensive new ring, Mengping dances to a fancy record player, and Erjie has a shiny new bicycle, their father, Lu Zhenhua, only agrees to give Yiping a fraction of the money they need to make ends me. Yiping says because he refuses to support his own daughter, he is not a real man. This makes him furious, so he whips her. Everybody else watches silently.

After the whipping, Yiping says she will get revenge on ALL of them. Her father finally decides to give her the money, but she throws it in his face, saying that they are no longer father and daughter. She runs out in the rain … and that’s when Shuhuan first sees her.

When she finds out that Ruping is in love with Shuhuan and he might become her new boyfriend, Yiping sees her first opportunity for revenge. But can Yiping break other people’s hearts without breaking her own? 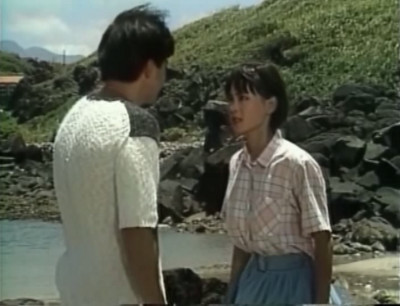 However, if you look at this drama, it looks totally 80s. In fact, it feels so thoroughly 80s that the occasional throwbacks to the 60s feel jarring to me, even though I know the story is technically set in the 1960s.

This shows that the makers of the drama were oblivious to just how much they were infusing contemporary style into the show, assuming that the 80s were not terribly different from the 60s. And since this was made in the 80s, they probably were able to notice the 80s style about as well as fish can see water.

Pouring Sugar on Stakes Thrust through the Heart, or TV Drama vs. Novel 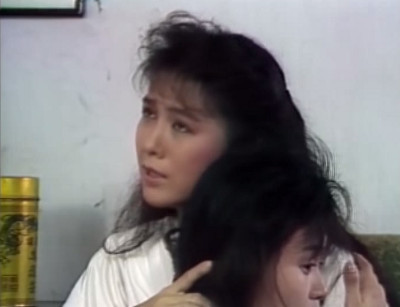 This is the title of the first section of Part 2. If you want to know what I’m talking about, or why I hate this story, be sure to come back next week!

Sara K. is hosting April’s Carnival of Aces over at her personal blog. If you’re inclined, you’re welcome to submit something of your own.