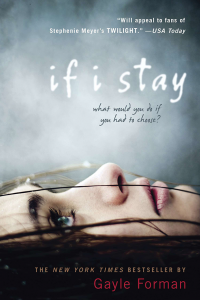 If I Stay
Mia has a perfect family (hip parents, adorable younger brother) and a perfect boyfriend (Adam, a sensitive punk rocker) and is a perfect cellist (surpasses multiple teachers!) whose perfect audition landed her a spot at Juilliard after graduation. Her perfect life (well, okay, there’s a modicum of tension with Adam about her moving away to New York in the fall) is destroyed when a car accident on a snowy day claims the lives of her parents and brother and leaves Mia in a state of astral projection, able to see what’s happening to her body while she struggles to decide whether to stay and live out her life after such a devastating loss or die and potentially join her family.

I’m not sure what I expected from If I Stay, exactly. Perhaps something spookier? Instead, it mostly alternates between Mia reflecting on memories with various loved ones and observing the goings-on at the hospital, including an episode in which Adam, instead of simply asking Mia’s grandparents to help him get in to see her, stages an elaborate distraction involving a rock star singing in the corridor outside the ICU. It’s as cringey as it sounds. I also wasn’t fond of the suggestion that it’s inherently virtuous to like classical music.

Despite my complaints, though, I didn’t hate it. Mia’s “this can’t be real” terror is conveyed well and I did get unexpectedly verklempt a couple of times. The book also gets much better once Mia’s best friend, Kim, is introduced. It’s through stories about Kim that we finally start to see Mia as someone less than perfect, which is decidedly welcome. I do find, though, that I wish the whole book had been about Kim in the first place! I find her much more interesting than Mia.

In any case, I did like this enough to check out the sequel. 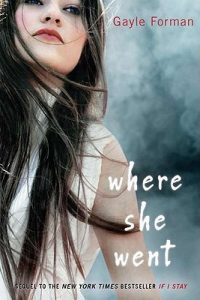 Where She Went
Where She Went is quite a lot better than its predecessor. Told from Adam’s perspective, it’s set three years in the future as he—now a world-famous, Grammy-winning rock star and yet totally miserable—runs into Mia in New York City. It turns out Mia dumped Adam only a few weeks after she went off to Juilliard and never told him why, which completely destroyed him for a while until he channeled his pain into a batch of songs that would catapult Shooting Star’s major-label debut into multi-platinum status. They each have one night before they’re due to head out on tour and Mia suggests they spend it checking out some of her favorite spots around the city.

I thought Adam’s mental state was conveyed well. He’s hurt, he’s angry, he’s closed off, he’s sick of being tabloid fodder, and he no longer feels any love for music. Although he once vowed to let Mia go if she would just stay, it’s clear that he hasn’t been able to do that. Throughout the course of their conversation, however, he’s finally able to see that the person who’s really been harming him all this time is him, not Mia. The payoff here felt well-earned. Also, Mia does not come off as perfect here as she did in the first installment, which I appreciated.

In a series with some supernatural touches around the edges, it’s notable that the thing that really stretched my credulity is that everyone is so ridiculously successful at such a young age. Adam is a huge celebrity. Mia was extra special even at Juilliard and their meeting occurred at a concert she was giving at Carnegie Hall. Not only that, she’s somehow famous enough that a journalist from the rock scene knows about her and wants the scoop on her and Adam’s relationship. Even Kim has become a war photographer who sells her photos to The New York Times.

Still, this was quite good and made me a bit sniffly, which I perversely enjoy.