For the last two weeks of January 2015, the Female Goth Mangaka Carnival is focusing on the works of Kaoru Fujiwara, Maki Kusumoto, Mitsukazu Mihara, Junko Mizuno, Asumiko Nakamura. While I’ve read and enjoyed manga created by almost all of those women, Mihara is the mangaka that I’ve read the most of and am most familiar with out of the group. (Granted, that may in part be due to the fact that of the five she has had the most manga licensed and released in English.)

Sadly, there doesn’t actually seem to be very much information available in English about Mitsukazu Mihara beyond a few well-established facts. She was born in Hiroshima, Japan on October 17, 1970 and for a long time was based in Osaka. (I believe she may now be working out of Tokyo.) She made her manga debut in 1994 and has been writing and illustrating ever since. Mihara is often credited as being particularly influential in refining the Gothic Lolita sensibility and she frequently served as a featured illustrator for the Gothic & Lolita Bible magazine.

Between 2004 and 2007, Tokyopop released many of Mihara’s works in English, beginning with her series Doll. Mihara is particularly known for her short manga with twists–even her long-form works tend to be fairly episodic–and she frequently employs darker themes and includes heavy psychological elements in her stories. Her manga is influenced and inspired by the problems and issues that she sees in society as well as by her own personal traumas. As she states in an interview from 2008 in the debut issue of the North American edition of Gothic & Lolita Bible, “Often, my greatest work is born during the bad times.”

Although IC in a Sunflower (1997) contains some of Mitsukazu Mihara’s earliest work, the volume was actually the last of her manga to be licensed in English. A collection of seven unrelated short manga, the volume includes her award-winning debut “Keep Those Condoms Away from Our Kids.” Another of the collected stories, “The Sunflower Quality of an Integrated Circuit,” would later be tied into her series Doll.

While there is some absurdity and black humor in R.I.P.: Requiem in Phonybrian (2000), the volume’s darker elements take precedent. The manga follows the angel Transylvanian Rose who has rescued the soul of a suicide, but he isn’t particularly happy about this turn of events, nor is he particularly interested in his new responsibilities of cleansing other souls. The manga starts out fairly episodic but quickly coalesces.

Beautiful People (2001) is another collection of Mihara’s short manga and includes six unrelated stories. The volume features a range of genres and sub-genres including science fiction, fantasy, magical realism, post-apocalyptic fiction, contemporary drama, and suspense. In general, like much of Mihara’s work, the manga included in the volume tend to be darker in tone, but there are moments of brightness as well.

The manga that Mihara is probably most well-known for, at least in English, is her six-volume Doll (2000-2002). The manga is a series of loosely interconnected stories of androids and angst that are tied together by the end of the final volume. Although the Dolls are an important part of the series, the focus of the manga is much more on the humans and their relationships to the Dolls and to each other.

Because it’s primarily a comedy, Haunted House (2002) stands out from the rest of Mihara’s manga available in English. Granted, it still has elements of horror in an Addams Family sort of way. Sabato Obiga is a teenager who desperately wants two things in his life: a girlfriend and a normal family. Unfortunately, the eccentricities and occult interests of his “death flavored” relatives would seem to make both an impossibility.

My introduction to Mihara’s work was through her series The Embalmer (2003-2013) and it remains my personal favorite of her manga. Sadly, only four of the series’ seven volumes were released in English. I’ve actually written a little about the series before, specifically in regards to the main character and the role of embalming in the story. Less fantastic than many of Mihara’s other manga, the series has a strong grounding in reality. 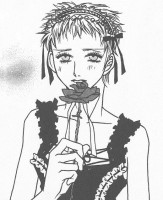 There are many themes and variations upon them that appear and reappear throughout Mitsukazu Mihara’s work. One of the most prominent elements in Mihara’s manga is the inclusion of families. Even Haunted House, which is so unlike many of her other works, has a family at its core. The families in Mihara’s manga are often broken and in need of healing, but underlying all that turmoil and trauma is an understanding of the immense importance of family and the profound influence, both positive and negative, that a family has on its individual members.

Maturer themes dealing with sex and sexuality have been present in Mihara’s work since the very beginning. Her debut manga “Keep Those Condoms Away from Our Kids” (collected in IC in a Sunflower Circuit) tells the story of a near-future Japan in which the birthrate has plummeted because younger generations have completely lost interest in sex. In the post-apocalyptic vision of “World’s End” (collected in Beautiful People), a peculiar twist of fate means that a lesbian and a gay man may be the only survivors. Perversion, fetishism, bondage, and sadomasochism can be seen in much of Mihara’s work as well, but perhaps most obviously in Doll.

Although frequently viewed through the lens of speculative fiction, Mihara isn’t afraid to look at the harsher realities of life and the darker sides of human nature. Abuse, obsession, sexual violence, and other harmful deviant behaviors can all readily be found within her work. Many of Mihara’s characters are suffering, whether from the actions of others or from their own personal demons and psychological disturbances. There is tragedy, sadness, and pain in both their lives and their relationships. Life isn’t always pretty, and Mihara doesn’t shy away from that fact in her manga.

People can be cruel and are capable of terrible things. As is seen again and again in Mihara’s work, it takes a human to be inhumane. The monsters in her stories are often the ones showing the most empathy and caring for others. Sometimes those monsters are literal–like the vampire in “Blue Sky” (collected in Beautiful People). Sometimes they are beings of human design–like the clones in “Alive” (collected in IC in a Sunflower) or the Dolls. And sometimes they are other people who are for one reason or another shunned, abandoned, or reviled by the rest of society. But there is some hope in humanity that remains–people are changed, often for the better, by their interactions with those “monsters.” 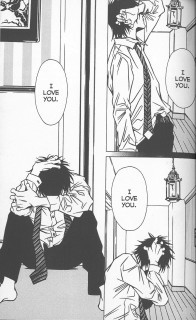 Death and dying are themes that frequently make an appearance in Mihara’s work, but at the same time an immense respect and reverence for life can always be seen. Matters of life and death are most realistically examined by Mihara in The Embalmer, the series focusing on those left behind to grieve the deaths of their loved ones. The characters must respond to that loss of life in a very personal way and their relationship with death is constantly changing as a result. Requiem in Phonybrian and many of Mihara’s short manga take a more fantastic approach to death and the afterlife, but emotionally it is all still very real.

Mihara’s manga deal extensively with dualities. This is visually epitomized in the Gothic Lolita aesthetic which Mihara frequently incorporates into her work, but it is also present in the narrative themes that she explores. Light and darkness. Beauty and ugliness. Innocence and perversion. Love and hate. Purity and corruption. Human and inhuman. Hope and despair. Life and death. They are pairs of concepts that are so closely intertwined that it is simply impossible for them to be separated from each other.

They are all also qualities that exist simultaneously within a single person or a single story. Although often viewed as positive or negative characteristics, Mihara’s work shows that they aren’t necessarily inherently good or bad. Rather, it’s a fixation on a particular ideal or other imbalance in those qualities that truly causes harm. Mihara’s stories, just like individuals, contain many complexities, contradictions, and layers. They can be shocking and surprising and may often have more depth to them than might first appear.