Let’s look at the (abbreviated) facts:…

END_OF_DOCUMENT_TOKEN_TO_BE_REPLACED 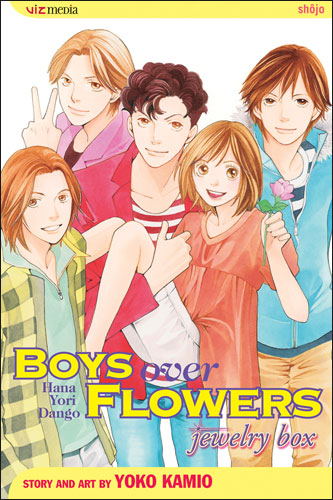 Though Boys Over Flowers‘ main story finally concluded after 36 volumes, neither fans nor mangaka Yoko Kamio were quite content, thus the release of Boys Over Flowers Jewelry Box featuring two side stories set after the series’ final volume. The first of these follows heroine Tsukushi Makino, now out of high school and working as a clerk in a real estate office to pay her family’s bills. With boyfriend Tsukasa still in New York, former love interest Rui has taken to visiting Tsukushi’s family regularly, becoming so familiar he even addresses her father as “dad.” When the whole group is assembled in Paris to witness the wedding of Rui’s former crush, Shizuka, Tsukasa clearly demonstrates his jealousy by asserting control and throwing money (and insults) at Tsukushi, as usual. The second story focuses on Rui, his uncertainty over his future, and his difficulty letting go long-held feelings for Tsukushi.

Unlike many fans, I felt quite satisfied with the way things were left at the end of volume 36, with true love finally settled (at least for Tsukushi and Tsukasa) but not so settled that the character’s futures were unnecessarily narrowed. After all, the story’s heroine was still in high school at the end of the series, and I think I’d have felt incredibly uncomfortable if things had been left any more certain than they were. That said, there is something decidedly comforting about sneaking a peek into Tsukushi and Tsukasa’s future lives and seeing them still bumbling along in their fiery-yet-conservative romance, as awkward and volatile as ever. Though it is disconcerting to see Tsukasa falling back into his worst, most controlling self at the first twinge of insecurity, demonstrating very little personal growth since the end of the series proper, if there’s one thing that has been made clear over the course of the series, it is that Tsukushi can handle herself regardless of his behavior.

Even nicer is the look into Rui’s world, something that remained largely mysterious throughout the series particularly in terms of his feelings for Tsukushi and, really, women in general. With its thoughtful, melancholy look at Rui and his place both in Tsukushi’s life and within the F4, this volume’s second story is quite plainly the best reason to buy it. I’d consider it a must-read for any fan.

Though this manga offers nothing on the level of Boys Over Flowers‘ greatest drama, that is perhaps the secret to its charm. Short but not too sweet, Boys Over Flowers Jewelry Box provides a nicely quiet postscript to this deliciously melodramatic epic. 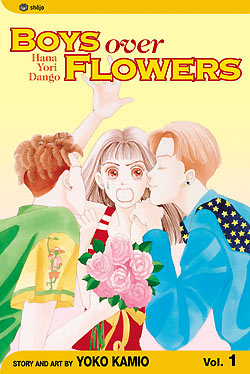 Tsukushi Makino is a smart girl from a working class background, attending an elite “escalator” school populated mainly by kids of wealthy families. Disgusted by a group of rich bullies known as the “F4” (“Flower Four”) who rule the school with an iron fist (and their parents’ money), she finally snaps and kicks the leader (Tsukasa Domyouji, son of a powerful corporate mogul) in the face as he begins to bully her best friend, Makiko. Defying the F4 earns Tsukushi a dreaded “red slip”–the F4’s declaration of war–something that signifies such torment and misery to come that it typically drives students into transferring out of the school. …