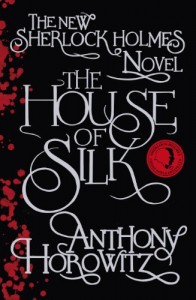 The House of Silk
I have read two other books featuring Holmes and/or Watson that were written by someone other than Arthur Conan Doyle, but I must say that The House of Silk surpasses them both.

Elderly Watson’s health is failing, and he is in a facility where the nurses think writing about his time with Holmes (who died the year before) will be therapeutic for him. As it happens, there is a “monstrous” and “shocking” affair which he had never previously recorded, so he makes plans to send the completed manuscript to a solicitor with the instruction that the package not be opened for 100 years. He then sets about recounting events which began in November 1890, when a man named Edmund Carstairs paid Holmes a visit.

Carstairs is a fine-art dealer who is apparently being menaced by the surviving member of a gang responsible for stealing some valuable paintings on their way to an American client. In the beginning, the book moves rather slowly and it doesn’t seem like there is enough about this case to fill a whole novel. But then one of the Baker Street irregulars that Holmes employs to keep watch over the culprit is brutally murdered, and the resulting investigation ultimately leads to a discovery that is, indeed, suitably shocking.

Horowitz has a good grasp on the characters, and though Holmes is somewhat more human here than elsewhere—castigating himself for the boy’s death, for example—it doesn’t seem out of character. Too, the various pieces of the puzzle fit together in ways that make absolute sense in retrospect but which I never could have guessed. I’m very much looking forward to the follow-up, Moriarty, though Holmes and Watson are apparently absent from that novel. 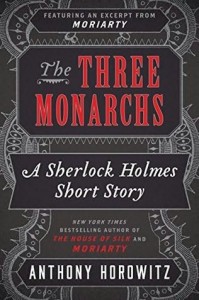 It’s largely inconsequential—Holmes is consulted on a puzzling burglary in which the suspect (shot by an elderly homeowner) was attempting to abscond with three very common ceramic figurines celebrating Queen Victoria’s Golden Jubilee—and seemingly exists only to remind readers of the existence of Inspector Athelney Jones, first encountered in The Sign of Four, who will be playing a large role in Horowitz’s Moriarty. He vows to learn Holmes’ methods, but Watson notes that he soon grows ill and takes leave from the police. 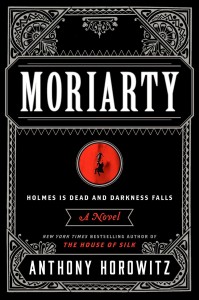 Moriarty
Set just after Holmes and Moriarty’s meeting at Reichenbach Falls, after which both are presumed dead, Moriarty is the story of American criminal ringleader Clarence Devereux, who has come to England with the goal of taking over Moriarty’s organization, and Pinkerton detective Frederick Chase, who teams up with Scotland Yard’s Athelney Jones (back at work after a year-long convalescence) to stop him.

What I liked best was the dynamic established between Chase and Jones. As it turns out, “The Three Monarchs” was not so inconsequential after all, as the shame of having been wrong yet again spurred Jones into fanatical study of Holmes’ methods and treatises, to the point where he’s become quite good at deductions himself, while narration from Chase chronicles his exploits. Though Holmes and Watson technically are absent, their influence, therefore, is palpable.

Unfortunately, the book is rather lacking in the suspense department. That’s not to say I require suspense, but that several scenes that ought to have been suspenseful simply weren’t. For example, Chase and Jones unlawfully infiltrate the American legation and once they are caught, Jones’ career at Scotland Yard is in jeopardy, but it’s all very ho-hum, to the reader and to Jones. Moreover, a plot twist that Horowitz presumably hoped would elicit gasps of surprise instead only compelled me to triumphantly cry, “I knew it!”

I would still recommend these books to a rabid Holmes fan who has devoured everything else, and I’d still read another one if it is published, but I do hope it’s more fun than this one.