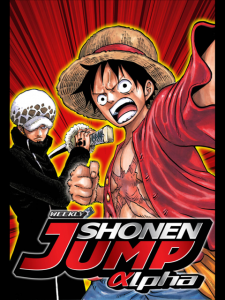 There’s no real cure for a lazy writer than a topical issue that is updated every week. Thus, here we are, with a brand new column dedicated to celebrating the spearhead of digital and simultaneous manga publishing in the West: Weekly Shonen Jump Alpha.

The basic idea of this column is to provide my opinion of the most recent issue of WSJA, and to provide a forum for fans to share their own opinions on the latest Jump chapters. For those who hate reading but love listening to people talk about manga, fear not, just check out my podcast, new episodes posted the weekend after each issue comes out. You can find it at: Burning Lizard Studios

Without further ado, let’s see how the chapters this week fared. And yes, ye have been warned, there will be possible spoilers in these columns. I’ll try to keep it to a minimum, but when talking about a story you kind of need to talk about the story. So I can’t make any promises.

One Piece Ch. 693
The thing about One Piece is that depending on who you’re talking to it’s the most satisfying manga to read on a weekly basis, or it’s complete gobbledegook. Well, if you’ve paid attention to what I’ve written in the past then you know I love One Piece more than any other shounen manga. And this week was as good as ever. Some would say that Oda’s artwork is cramped, and I can’t quite deny that, seeing as how I had that same reaction the first time I ever saw the manga. But the advantage of this is that we get a chunky bit of story every week. And with how large the cast of One Piece is, that’s an absolute requirement.

The majority of this chapter was setting up the finale of this arc. Caesar Clown looks like he’s about to get away scott free, if Baby Five manages to get past Franky. With the island possibly exploding it looks like we’re in for a close escape. 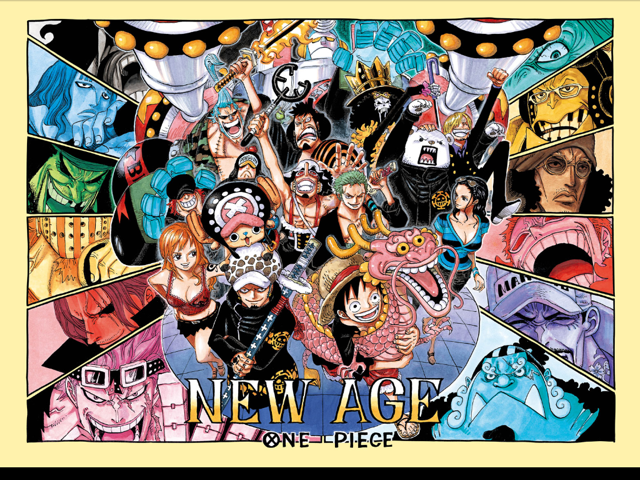 Naruto Ch. 614
Speaking of series with giant casts, Naruto is one of those series that could either use a little more content with each chapter, or at the very least spend a little more time focusing on the side characters. And even when it does focus on side characters, it’s never the ones that actually need the focus.

Case in point: A certain character is mortally wounded this chapter, and apparently dies. I’m not one to downplay tragedy, even when it’s fiction, but this really would have meant more if the certain character had actually done something in the past three hundred chapters.

It’s not like it’s impossible for an underused character’s death to be tragic; after all, Asuma’s death back in the early days of the time skip was actually well written and tragic. This is because right before killing Asuma, Kishimoto took the time to show us why him dying was tragic. His relationship with Kurenai was confirmed, and we get the revelation that they were about to have a child together. Coupled with the impact this has on his students it’s a pretty tragic moment. Granted I wasn’t entirely convinced because I personally would have preferred to see more of him before he was offed, but at the very least Kishimoto took the effort to make his death meaningful.

With the death in this chapter I have to admit that there’s still a chance that it will become more meaningful in later chapters. It just doesn’t help that I haven’t read anything substantial about this character in the past four years or more. The flashbacks to his scenes with Naruto early on in the manga don’t help much either. Rather they feel more like Kishimoto is waving them in our face, saying, “Remember how meaningful he was back when I bothered to do anything with characters other than Naruto and Sasuke? Feel bad!!!”

Nisekoi Ch. 56
It takes some serious writing chops to take a character like Marika Tachibana and actually make her interesting. We’ve seen her likes before. She’s the one everyone hates in the harem show—the arrogant one, the clingy one, the Shampoo, the Ayeka. The characters hate her, and the readers hate her. And yet, that really isn’t the case with Marika. Sure, her outer character is blatantly one-note, but those moments with her are actually entertaining, and there are just enough hints that there is more to her character—that she’s playing a part to keep us interested.

It also helps that Komi Naoshi is a genius at comedic facial expressions. I rarely get through a chapter of Nisekoi without finding an expression I love. This week the prize goes to Ruri, for her look of utter disgust at being ranked right under Shu. 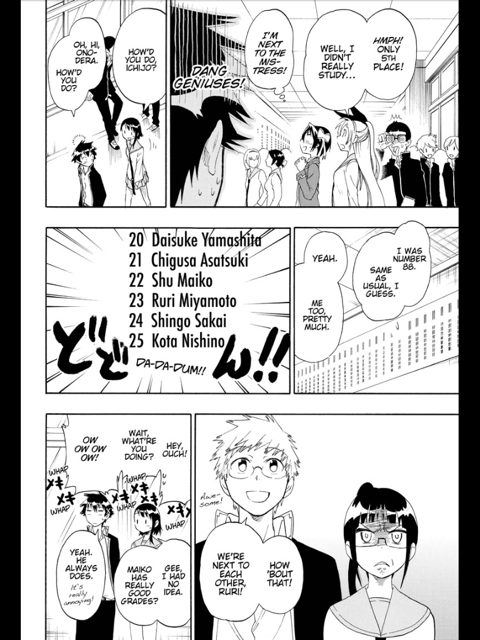 Toriko Ch. 216
I love Toriko far more than I should, considering I haven’t even read all of it. I’ve read the first nine volumes, and everything that’s been published in WSJA. This one is a victim of Viz’s inability to provide the chapters leading up to the most recent in a way that is actually economically feasible. Thus I find myself stuck in a position where I can either read the most recent volumes and wait for those to catch up with the chapters first published in WSJA, or I can find alternative ways to catch up. At the moment I’m holding strong with just reading the volumes, so here’s hoping we catch up soon.

I love cooking, and I love shounen fighters, so this is a match made in heaven. Especially with the most recent arc being a cooking festival. This is where I’ve truly fallen in love with the series. All the colorful characters, the way something as simple as food and cooking can fascinate an entire world. All of it together is just wonderful, and the introduction of Brunch these past chapters has been a great addition. This chapter itself is a bit on the weaker side, since it skims over most of the competition to introduce the final matches. Personally I would have loved to see more of the preliminaries, but considering how many chefs were involved I’m thinking this was probably for the best.

Cross Manage Ch. 15
I don’t particularly care for sports manga, nor am I making the mistake of getting too attached to brand new Jump series. Experience has taught me that new series have to be phenomenally lucky to actually survive to the point where they really become entertaining.

A lot of Cross Manage has been focusing more on the development of the main characters than the actual sport of lacrosse. This isn’t necessarily a bad thing, considering that lacrosse is presented more as a setting rather than the driving force of the story. But I really would like to spend some more time with the extended cast. I like series like this, where superficially it’s about a sport, but really it’s about the large cast of characters. So I find myself at a loss for what to do with a series that promises shounen manga, but then gives me a shoujo manga.

Not to say a shounen with shoujo tendencies is a bad thing, I actually find it hilarious that Cross Manage is potentially fooling people into believing it’s a shounen manga, when it so clearly isn’t.

At the very least we’ll get to see some more lacrosse, with perhaps some more focus on the ancillary characters during this tournament arc. I’d love to see this manga continue, but considering the fates of Barrage and Takama-ga-hara, I’m not too optimistic about Cross Manage‘s chances.

Bleach Ch. 521
Is it just me, or would Kubo be happier if he replaced his entire cast with big breasted women? Or just women in general. It seems to me that there is nothing he loves more than expanding a story that should take a fourth of the time it takes, and that’s drawing attractive women. Now, as a straight male I have absolutely no problem with this whatsoever. However, as a fan of manga, and fiction in general, I would appreciate if a bit more care went into the story. I’ve mentioned One Piece as an example of a manga that has a lot of material every week; well Bleach is the exact opposite. Kubo’s biggest problem, and there are some doubts that this is entirely his fault, is that he just doesn’t have enough material per chapter. A chapter of One Piece may take me a quarter of an hour to read. I can get through a chapter of Bleach in about five to eight minutes. There just isn’t enough to sink your teeth into on a weekly basis. 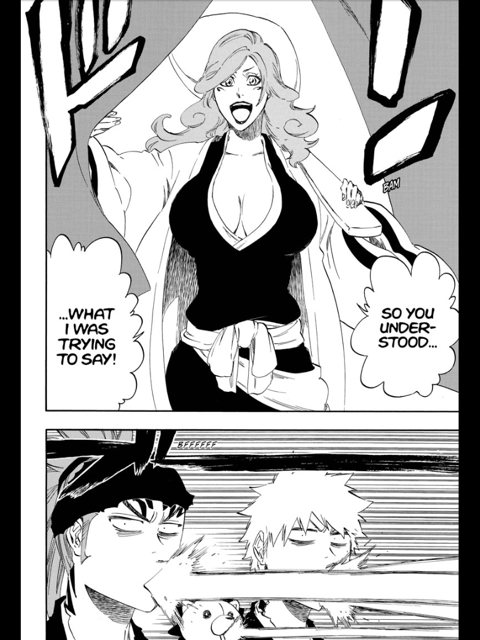 To be fair to this chapter, I’ve always liked Kubo’s sense of comedy. It’s not necessarily what he does best, but in my opinion he does it pretty well. The overall comedic sense of this chapter might throw some people off, but I for one at least enjoyed it. I look forward to next week’s chapter where we get to find out about the origin of Zanpakuto.

I’ve only ever watched the first Yu-Gi-Oh! series. And not even all of that. I’ve never read the manga. Nor have I ever read the manga (besides a few chapters) of the spin-off series. The problem with a manga like this is that it’s a tie-in media for the anime, and in my personal experience that tends to be a code phrase for, “Not very good at all.” There’s an element of laziness that creeps through in the adaptation from a different media to the graphic novel media.

But, let us not allow my bias to cloud my vision of this chapter of Yu-Gi-Oh! Zexal. What do I really think of the chapter? To be honest I don’t have a clue. Like Toriko, this series has the disadvantage of having several chapters published before it made its way into WSJA. But unlike Toriko I refuse to spend money to catch up on this series.

Superficially this is the most Yu-Gi-Oh! of all the series. The hair alone would put any glam rock band to shame. At least with the original series all the crazy hair looked fairly anime standard. With this one it looks like all the characters are Yugi poser wannabes. How many different shades of color can one head of hair have!?

This series even goes so far as to introduce technology that would be a lot more effective at resolving the conflict than a bunch of cards. Someone kidnaps your little brother? Forget the cards, you’ve got a jetpack! Fly up there and save the kid!

I will admit that a lot of my complaints stem from never really getting into this franchise. So at the very least I can say that were I invested in the series I might be more positive about this. But since I am not, I have gone from the original series to this, which is a bit of a jarring transition to say the least. As an outsider I can say that what I’m looking at is pretty ludicrous, but as an outsider I readily accept the fact that I just might be missing something.

That wraps up this week’s recap, join me next week as we continue our journey towards legally reading Jump chapters at the same time as Japan. If you want to know my opinion on last week’s chapters, check out my podcast, Manga^3 for the latest in manga news and commentary: http://www.mediafire.com/?09m5dfpi5lx92tf