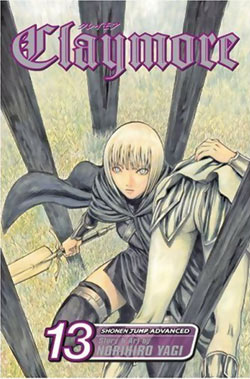 Volume twelve brought us into a new era in the Claymore universe by moving ahead seven years, solving the mystery of the warriors who vanished in the Battle of the North, and introducing us to a new generation of Claymores.

As volume thirteen opens, rebel warriors Clare, Miria, Helen, and Deneve rescue a young team of Claymores just as they are about to be destroyed by powerful Awakened One, Riful of the West. Before escaping, Clare persuades Riful to share some of what they’ve missed in the world during their years in hiding, including some new revelations regarding the long sought-after Priscilla.

We also catch up with new number 47, Clarice, who is being sent on a mission to eliminate former number 3 Galatea with her new partner, the terrifying and very young Miata, whose disturbing psychological issues and deadly abilities make Ophelia seem like a walk in the park.

The battles feel like background in this volume, which instead focuses heavily on plot and characterization, making it a particularly compelling read and moving the story along substantially. There is a fantastic chapter for those of us who are fans of Teresa, and some additional background on Miria as well.

I’m always impressed by how easily Norihiro Yago is able to create such distinct characters when most all of them are women with uniform physical features (not to mention actual uniforms), and my admiration only increases as the web of characters becomes more complex.

Plenty of mystery remains, especially in light of the recent jump forward in time, including the fate of Raki, who does not even make an appearance. Even so, the pacing feels just right, and the story never drags as it sometimes did earlier on.

This is an exceptionally strong volume in a series that has grown consistently more interesting over the course of its run.

I’d waited so eagerly for this volume, and here I am almost a month late with it. I suppose I can’t complain, though, as it’s the perfect reading for a stormy Saturday morning.

Fullmetal Alchemist is one of those series where every volume brings amazing new revelations, yet it is so well-plotted, none of this ever feels melodramatic or forced. I am constantly impressed with depth and detail of Hiromu Arakawa’s planning for this story, compounded by her deft execution of it. I know that FMA is a popular manga, but I often feel that in spite of (because of?) that, or perhaps because it is a shonen manga, Arakawa does not get the recognition she deserves for being a seriously fantastic storyteller. The release schedule for FMA in the US leaves long gaps between volumes, and I tend to get caught up in other things in-between. But every time a new volume comes out, I’m reminded immediately of why I’ve often said this is my favorite manga series.

END_OF_DOCUMENT_TOKEN_TO_BE_REPLACED

Brigid Alverson is giving away sets of Vertical’s new edition of Osamu Tezuka’s Black Jack to a few lucky winners who will be randomly chosen from her blog. To enter, leave a comment in this entry, telling her about your favorite new manga in 2008. I left my own comment there yesterday, and as I was trying to figure out just what my favorite new manga from 2008 was, I realized that the answer is probably one I haven’t posted about here yet at all.

It was actually a pretty difficult answer for me to come up with, mainly because all the manga I’ve become really obsessed with in 2008 have been either older series, or current series that are still being released, but which began publication in English well before this year. In fact, I realized sadly that I have read almost nothing genuinely new this year. Still, as I poked through the books on my shelf, one new manga jumped right out at me. That would be Est Em’s Seduce Me After the Show, published in Japan in 2006, and released by Deux Press in English in May of this year.

END_OF_DOCUMENT_TOKEN_TO_BE_REPLACED

Well, a friend warned about the sexism in chapter 2 of Bakuman, but I didn’t realize how strong it was until I saw it for myself today. I’ll keep reading the series, and I’ll buy the books when they come out, because I’m a Takeshi Obata fangirl and there’s nothing to be done about it. But, wow.

END_OF_DOCUMENT_TOKEN_TO_BE_REPLACED

September’s issue of Shonen Jump arrived in my mailbox today, nicely timed, as it contains “Chapter 0″ of Stan Lee and Hiroyuki Takei’s Ultimo, which I’d just been reading about in yesterday’s comic-con reports. Sadly, my reaction to it has been distressing.

END_OF_DOCUMENT_TOKEN_TO_BE_REPLACED

I’ve been waiting anxiously for the official release of xxxHolic volume 12, and though it’s been quite an ordeal getting to finally read it (late shipments, car crashes, etc.) it was such a treat to finally really sit down with it. I read it once last night while I was still pretty screwed up in the head (that would be the car crash factor), and then again tonight, slightly less screwed up. Both reads were pretty intense. Volume 12 is very special to me, and I’ll talk a bit about why.