SEAN: Is it Halloween yet? No.

ASH: Just treats until then, right?

Airship has a print debut of one of my favorite 2022 light novels, Though I Am an Inept Villainess: Tale of the Butterfly-Rat Body Swap in the Maiden Court (Futsutsuka na Akujo de wa Gozaimasu ga – Sūgū Chōso Torikae Den). You may think “but I already read The Apothecary Diaries *and* Culinary Chronicles of the Court Flower, do I really need another of these?”. Yes. Yes, you do.

ASH: If those are comparable series, then that’s a solid recommendation. 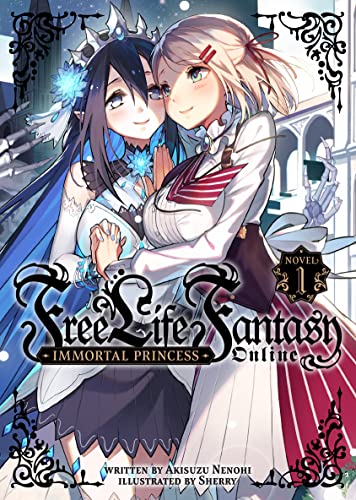 SEAN: Digitally we see the early debut of Free Life Fantasy Online: Immortal Princess, whose manga Seven Seas has also released, so let me copy paste: A newbie gamer gets a new VR game from her younger sister… but her character build is horrible! Now she’s a zombie.

We also get the 2nd volume of Vivy Prototype.

Ghost Ship gives us a 4th volume of JK Haru is a Sex Worker in Another World.

J-Novel Club debuts Backstabbed in a Backwater Dungeon: My Trusted Companions Tried to Kill Me, But Thanks to the Gift of an Unlimited Gacha I Got LVL 9999 Friends and Am Out For Revenge on My Former Party Members and the World (Shinjiteita Nakama-tachi ni Dungeon Okuchi de Korosarekaketa ga Gift “Mugen Gacha” de Level 9999 no Nakama-tachi wo Te ni Irete Moto Party Member to Sekai ni Fukushuu & “Zamaa!” Shimasu!). I wish I was lying about that title. You’d think with a title like that it’s a parody, but I’m told it isn’t.

ASH: With a title that long, I’m not sure the novel would actually provide many more details.

SEAN: We also see Black Summoner’s 8th manga volume, Chillin’ in Another World with Level 2 Super Cheat Powers 8, D-Genesis: Three Years after the Dungeons Appeared 2, Housekeeping Mage from Another World: Making Your Adventures Feel Like Home! 3, John Sinclair: Demon Hunter 8, The Magic in this Other World is Too Far Behind!’s 9th manga, Sorcerous Stabber Orphen: The Wayward Journey 19, To Another World… with Land Mines! 4, and VTuber Legend: How I Went Viral after Forgetting to Turn Off My Stream 2.

Kodansha Manga has, in print, EDENS ZERO 19, Fire Force 29, and That Time I Got Reincarnated as a Slime: Trinity in Tempest 6. 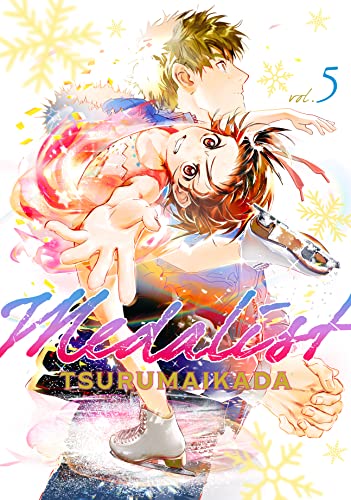 Digitally there is more. We see And Yet, You Are So Sweet 6, Are You Lost? 10 (the final volume), Cardcaptor Sakura: Clear Card 12, Cells at Work! White Brigade 3, Doing His Best to Confess 3, Elegant Yokai Apartment Life 24, Gamaran 2, Golden Gold 5, I Guess I Became the Mother of the Great Demon King’s 10 Children in Another World 6, Medalist 5, A Serenade for Pretend Lovers 5, and She, Her Camera, and Her Seasons 3. Medalist is, as always, something everyone needs to read.

MICHELLE: I am going to start Medalist this week!

ANNA: I need to start it too!

SEAN: One Peace has a 5th manga volume of Higehiro: After Being Rejected, I Shaved and Took in a High School Runaway.

More piles of debut volumes for Seven Seas. CANDY AND CIGARETTES runs in Young Magazine the 3rd, and features a retired cop who needs a job to pay for his grandson’s medical treatment, so partners with… an 11-year-old killer?

ASH: Not a combo I would have expected.

SEAN: The Evil Secret Society of Cats (Aku no Himitsu Soushiki Neko) is from the publisher Eastpress, and their magazine Matogrosso. A group of cats try to show humanity they are to be feared… but shucks, they’re just so adorable! This is in full color.

ASH: Always ready to give cat manga a try.

SEAN: I Got Fired as a Court Wizard so Now I’m Moving to the Country to Become a Magic Teacher (Kyuutei Mahou-shi Kubi ni Nattande, Inaka ni Kaette Mahou-ka no Sensei ni Narimasu) runs in Takeshobo’s Web Comic Gamma Plus. The plot is the title.

ASH: The premise could have potential. 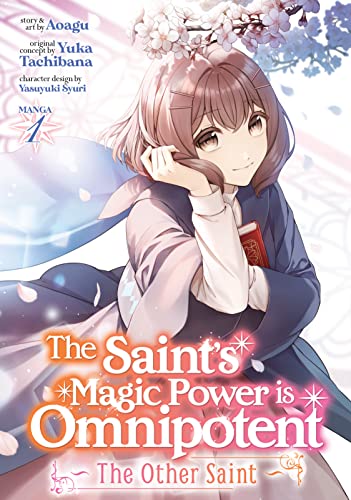 SEAN: The Saint’s Magic Power is Omnipotent: The Other Saint (Seijo no Maryoku wa Bannou desu: Mou Hitori no Seijo) is a spinoff of the main light novel series, telling the story from the perspective of Airi. It runs in Kadokawa’s Flos Comic.

Also from Seven Seas: The Ancient Magus’ Bride: Wizard’s Blue 5, How Heavy Are the Dumbbells You Lift? 9, The Idaten Deities Know Only Peace 3, and The Tunnel to Summer, the Exit of Goodbyes: Ultramarine 2.

Tokyopop has a 2nd volume of Yuri Espoir.

Viz Media has a one-shot, Drip Drip (Bota Bota), with a …striking cover. A young woman can’t see anything she thinks is dirty without getting a massive nosebleed. Can she find love? This is from the creator of BEASTARS, which is likely the only reason we’re seeing it, and it ran in Manga Goraku.

ASH: That is quite the cover.

ANNA: I feel safe skipping this.

SEAN: We get the print debut of Mission: Yozakura Family (Yozakura-san Chi no Daisakusen), which is up to 14 volumes in Japan so it was hard to ignore any longer. It’s a Jump title, about a boy who ends up involved with a family of spies.

Speaking of Jump, The Shonen Jump Guide to Making Manga is what it sounds like, and features commentary from your favorite Jump artists.

ANNA: I need to get caught up on Frieren. 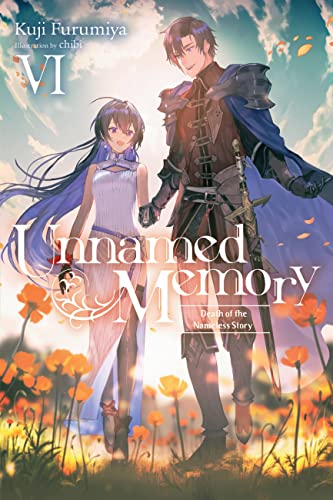 SEAN: Yen On has a lot of ongoing favorites. Bofuri: I Don’t Want to Get Hurt, so I’ll Max Out My Defense 7, Date a Live 7, Dragon and Ceremony 3, The Girl I Saved on the Train Turned Out to Be My Childhood Friend 3, The Irregular at Magic High School 20, Magical Explorer: Reborn as a Side Character in a Fantasy Dating Sim 3, Magical Girl Raising Project 14, My Youth Romantic Comedy Is Wrong, As I Expected 14.5 (the final volume), Spy Classroom 4, Unnamed Memory 6 (the final volume), and Your Forma 2.

Yen Press has several debuts. The Executioner and Her Way of Life (Shokei Shoujo no Ikirumichi) is an adaptation of the popular light novel, running in Young Gangan.

I Kept Pressing the 100-Million-Year Button and Came Out on Top (Ichioku-nen Button wo Renda shita Ore wa, Kizuitara Saikyou ni Natteita: Rakudai Kenshi no Gakuin Musou) is an adaptation of the popular light novel, running in Young Ace Up.

Sasaki and Peeps: That Time I Got Dragged into a Psychic Battle in Modern Times While Trying to Enjoy a Relaxing Life in Another World ~Looks Like Magical Girls Are On Deck~ (Sasaki to Pi-chan: Isekai de Slow Life o Tanoshi Mou Toshitara, Gendai de Inou Battle ni Makikomareta Ken – Mahou Shoujo Up o Hajimeta You Desu) is an adaptation of the popular light novel, running in Shonen Ace Plus.

SEAN: She Loves to Cook, and She Loves to Eat (Tsukuritai Onna to Tabetai Onna) has a woman make far too much food due to stress from work. Fortunately, her next-door neighbor loves food! This is apparently a yuri series, though slow burn. It runs in ASCII Mediaworks’ Comic It, and is not an adaptation of a popular light novel.

We also get The Abandoned Empress 3, Banished from the Hero’s Party, I Decided to Live a Quiet Life in the Countryside 3, Chitose Is in the Ramune Bottle 2, Combatants Will Be Dispatched! 7, Daughter of the Emperor 2, The Geek Ex-Hitman 2, In the Land of Leadale 2, Kakegurui – Compulsive Gambler – 15, Kakegurui Twin 11, MonsTABOO 2, Nights with a Cat 2, and No Matter How I Look at It, It’s You Guys’ Fault I’m Not Popular! 20.

What manga are you reading? Is it based on the popular light novel?