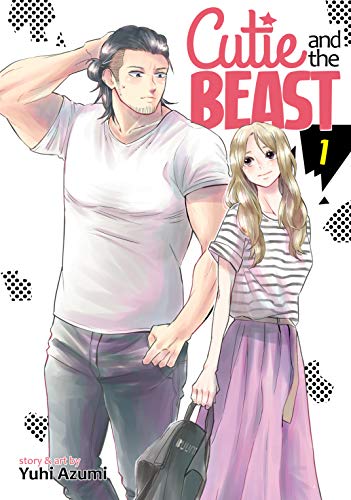 Coming to Yuhi Azumi’s Cutie and the Beast, I really only had a recommendation from Brigid Alverson and a description from her too. So with that, I dived in with the gusto of a wrestling star like our male lead, Kuga and tried to see if this was an entertaining first match or a one-off special.

Momoka is a high school student who watches wrestling matches on TV and follows the stars of the league, in particular a star currently portraying a heel (wrestling slang for a performer cast in the role of a villain in the league) called Kuga. Kuga is twenty nine and a committed wrestler who loves his role and his profession. One day, after interacting with Momoka online, Kuga crosses paths with her and an entirely unexpected relationship opens up for both of them.

Cutie and the Beast presents the relationship between Kuga and Momoka as pretty straightforward: Momoka has a massive crush on Kuga but Kuga is as inexperienced in love as she is. So the two of them spend the early moments of their relationship within the first volume as awkward teenagers. He’s a bit hesitant and unsure, she’s frustrated at the distance between them when she realises that he shares her affection. The issue of their age comes to the fore mid-way through and unusually, it’s Kuga’s wrestling friend who helped put them together who suggests that Kuga cools his jets. Kuga has too much to lose, Momoka still has to go to school. Their lives wouldn’t work. But like the proverbial square peg in the round hole, Koga and Momoka refuse to come unstuck. In real life, this would be very messy and I don’t know how long the story can sustain this. But the two of them are so nice both on their own and together, that I can give it a temporary pass. It’s kind of a suspension of reality where if a single person were to point it out to you while you read it, it would all be ruined. I love the framing when Kuga comes clean about why he’s been avoiding Momoka online and his distress as to their relationship. It’s neat and tidy, not going for high drama. In a way, that’s the whole manga in a nutshell: searching for places for its leads to be in but not rushing it to get there any quicker than is needed.

Azumi peppers her dish with various little things like the immediacy of Twitter and how it help Momoka connect with Kuga or how Momoka’s sister starts the story as a pest but rapidly gets in gear to get her and Kuga together. The wrestling matches and events that Momoka uses to interact with Kuga are careful, quiet, and used reservedly so it’s less like a love-sick fan who hangs on her favourite wrestlers every appearance and more about how she’s processing going from “I like this guy” to “I want this guy to give me a straight answer!” Along the way, the groundwork is laid for future volumes to either rally or lose their hard-won victories. I love how Momoka and Kuga are with each other and I can’t wait to read the next volume to see how the changes at the end of the first one set out their arcs in the future.