SEAN: This week doesn’t have as much as it originally did because of delays in publishing schedules, but it still has a lot.

Dark Horse has a 2nd Emanon, continuing the story beyond its initial origins. 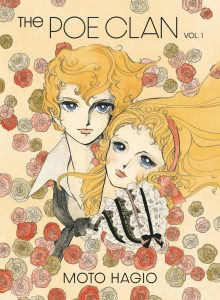 SEAN: Fantagraphics has what is easily the release of the week with the first volume of The Poe Clan, Moto Hagio’s vampire family shoujo manga that ran in Betsucomi from 1972-1976. This is the first of a deluxe hardcover release of the series in North America, and it is apparently fantastic.

MICHELLE: Somehow, I missed that this had been licensed!

MELINDA: I’ve been waiting for this for so long! I’m so excited!

SEAN: Haikasoru is releasing another SF novel with anime/manga interest, as Automatic Eve is out next week. Shogun drama with robots!

ASH: I usually end up reading most of Haikasoru’s releases ⁠— Automatic Eve probably won’t be an exception to that.

SEAN: J-Novel Club has the 15th I Saved Too Many Girls and Caused the Apocalypse and the 10th Outbreak Company.

Kodansha debuts (print and digital) Fairy Tail: 100-Year Quest, a direct spinoff of the main manga with the main cast.

Also in print is Boarding School Juliet 7 and O Maidens in Your Savage Season 3.

ASH: I’ve been meaning to give O Maidens in Your Savage Season a read. I should probably do that before I get to far behind!

SEAN: Digitally the debut is Vampire Dormitory. How far Ema Toyama has fallen when she is reduced to digital-only debuts. This runs in Nakayoshi, and promises to be as Ema Toyama as all get out.

Also debuting digitally is Cardcaptor Sakura, in its Collector’s Edition (print is already out). And Defying Kurosaki-kun 11, Farewell My Dear Cramer 2, and Tokyo Alice 14.

SEAN: Seven Seas’ debut is a digital one, with print to follow: ANIMA, a light novel series based on Neon Genesis Evangelion. I’m not sure if it’s another alternate universe or not, but it does appear to have NERV and piloting giant mecha and not, y’know, running out of homes with toast in your mouth. 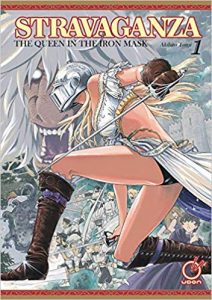 Udon debuts Stravaganza, which is an omnibus of the first two volumes. This Woman in the Iron Mask story ran in fellows!, and then moved to Harta, meaning it already has my attention. It’s also gotten some great buzz.

ASH: Count me intrigued as well.

SEAN: They also have a 4th Otherworldly Izakaya Nobu.

Vertical has a 2nd volume of Icelandic saga Go with the Clouds, North-by-Northwest.

ANNA: I need to read the first volume of Go with the Clouds, but rest assured it is somewhere in my house.

ASH: Golden Kamuy is the release that I’ll be prioritizing out of this bunch, though I suspect that I’ll eventually get around to reading some of the others, too.

SEAN: Lastly, there is Yen, though not as much as you’d expect, as a lot of their titles moved. On the light novel end we get So I’m a Spider, So What? 6 and That Time I Got Reincarnated As a Slime 6.

Digitally there seems to be a release of the first Log Horizon manga volume, which originally came out in 2015, but I’ve only seen solicits for it, not actual confirmation. We shall see.

Barakamon comes to an end with its 18th and final volume, meaning we’ll need someone else to take up the “not quite Yotsuba&!” banner while we wait for more Yotsuba&!. I though Barakamon was a lot of fun.

SEAN: And we get the 14th The Devil Is a Part-Timer! manga, Sword Art Online: Hollow Realization 4, Triage X 18, and Trinity Seven 17.

First: buy The Poe Clan. You should get Stravaganza as well. And the Evangelion light novel. Aside from that, what are you getting?