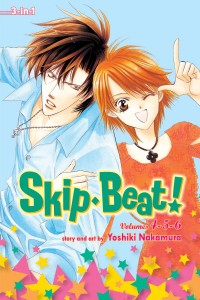 “Oh, it’s like riding a bike!” That’s what I told myself when resuming the responsibility of the column. The worst thing I could have done was tackle an ongoing storyline with complex characters, new characters being introduced, and a rapid fire script. So, I went for Skip Beat! which doesn’t sound anything like that, right? Well, if it were any other manga, I’d say I’d done myself a mischief, but with Skip Beat!, it’s such a good story I can’t complain.

Kyoko Mogami wanted to beat her slimy ex-boyfriend, Shu Fuwa, at being an idol after he cheated on her and treated her like a servant for kicks. Kyoko is now fully invested in becoming an idol at the LME agency and has been put into the grinder for it. Mr. Takarada (head of LME and secret Telenovela wannabe) has made her a member of the Love Me team (yeah, it sounds as bad as all that) along with Kanae Kotonami (Moko) who can’t stand Kyoko’s effervescence. While this made sound like a bit of a bad turn, in truth, Takarada really does see something in her that merits further help. Everyone else however sees her as either a joke or is scared to be around her. Along the way, the mangaka manages to fit in a petulant child who needs someone to see her as her, a psycho rival for Moko and the pressures of being Ren Tsuruga’s manager. Kyoko has to deal with the pain of seeing Shu again and by falling into the trap of wanting to hate on him (for good reason I might add), she ends up jeopardising her career. Despite all the progress she makes, he only has to turn up and she can’t help herself. I feel for her as there are people who have crossed my path and hurt in life and when I see them in the street, God help me, I want them to stub a toe or something. Now, I can shrug it off and go on with my day but Kyoko is so hurt and raw that we laugh at her getting angry and sending wave after wave of Kyoko demons into the air (scaring the hell out of anyone around her by the way) but then she does herself in and we’re there with her again as Sho dumps her.

For me, the highlight of the omnibus is the stand off between Kyoko and Moko and Erika Koenji and her partner in the audition for the drink commercial. After we learn in true villainess fashion that Erika has been thwarting Moko’s acting career since they were in school (I love how Nakamura makes it seem like it was ages and ages ago!) and that even when Moko looks like she could win, Erika uses her money to stop her. I am not kidding when I say I peed myself laughing at her. She makes the best villains in a silent era film look tame by comparison. Every time she wins, it’s the stock Japanese schoolgirl “Ho! Ho! Ho!” attitude and when she gets beaten, it’s the “I won’t be beaten by the likes of YOU!!!” for Moko. She lies, cheats and bribes her way into winning the audition and only because Moko completely has to trust Kyoko is the day won for our heroes. Speaking of heroes, Moko and Kyoko really start to look like they could be more alike than in the previous volume. Moko still has these tantrums where Kyoko is screaming at her for being bad (at least in Kyoko’s book) and Moko just screams back. It’s really amazing to see them as two bitching friends than rivals. Along the way, they deal with Erika and her hench-squad (who couldn’t catch a cold) and still manage to make it seem like they got away with it rather than have any actual skills, though we know they do. I like how the author uses the people and trials Kyoko finds to give us little snippets of her backstory. Whatever happened with her mother, it’s as open a wound as the one Sho made in her. When he brings the mother subject up with Kyoko, you can actually see Mr. Takarada wince at the crestfallen expression on the poor girl’s face. Also, when she runs across Sho, Kyoko makes me love her more by all the things she did for that git and he still burned her at the stake for it.

Nakamura spends the last bit of the book with Ren and Kyoko being together as she learns about him and who he was and is as a person and actor. I still think he acts way too aloof to be taken seriously. The author does show him to be a hard working actor and a kind person in his own way but every time he sees Kyoko’s angry side and tells her she’s wrong to want to be an entertainer for selfish reasons, I am left asking myself “Who are YOU to make such a judgement on people?” I’m not saying he can’t make assumptions like that, just that it’s hard to see where the author is going with this given that they’re quite good at showing Kyoko making enough of her own mistakes to prove Ren’s point. It feels like we need reminding that, oh yes, Ren will be the other person in this relationship with Kyoko and Sho. I wish this wasn’t needed but I’m hopeful that Nakamura doesn’t rely on old tricks as well as old tropes to carry the story. With that said, the lines and little comments the cast makes have me smiling and watching people like Mr. Takarada riding in on a horse with full trumpeting musicians behind him is double take territory. I’m happy to watch Kyoko get dirty and clean fighting her corner for another volume.

As always, please feel free to agree or disagree with my assessment. Leave comments in the area provided or give me a shout on Twitter at my account or the MBS account.