ANNA: Master’s Sun is a drama from the nearly always excellent writing team of the Hong Sisters, who brought the world the beloved shows You’re Beautiful and The Greatest Love among others. Master’s Sun is the story of an incredibly sleep-deprived woman who sees ghosts, and the arrogant yet secretly vulnerable President of a mega mall, who happens to have a ghost repelling ability and an inexplicable affection for wearing cravats in confusing ways.

I absolutely adored Master’s Sun, from the opening credits to the last scene of the final episode! What are your thoughts?

EMILY: I was wary going into this drama because the Hong Sisters had a serious misstep with their previous drama, Big. However, after watching this, I can say that they’ve returned in top form. This was a great drama. The characters are all so warm and weird and flawed, and they all really grew and changed as the story progressed. So Ji Sub, who I haven’t seen in any sort of comedic role in – I don’t even know how long – was great, playing his part with a quirky restraint, which allowed the always delightful Gong Hyo-Jin to go all out and be more outgoing and expressive and clingy. And ghost repellent– what a delightful excuse to get all touchy-feely! 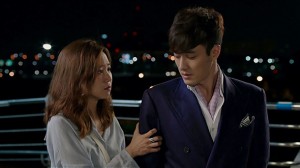 EVA: As you know, I’m absolute crap when it comes to watching shows to the end. I bail at the first sign of boredom. But this time I was hooked. The characters had chemistry, the ghosts were scary (at least during the first few episodes — the horror scaled back quickly), and the side characters were appealing and never overshadowed the main couple. Even better, the plot holes (there are always plot holes) weren’t so deep that I couldn’t step over them on my way to the next episode. And the weirdly styled cravats! And the bad hair! And the impossibly high heels! And the overbearing relatives! Sigh. Oh, k-dramas, how I’ve missed you.

ANNA: I really loved the way the characters were so idiosyncratic. I do enjoy more predictable k-drama shows, but when a show stands out like this for the quality of the writing and character development, it reminds me just how good k-dramas can be! The main couple are both broken in different ways, and their relationship slowly starts them on the path towards change. I thought that that the bodyguard Kang Woo and spoiled model Tae Yi Ryung were also a great counterpoint to the main couple. I loved the way Kang Woo nonchalantly turned down all the attempts to ask him out. 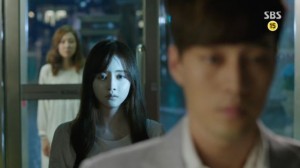 EVA: Exactly! The only truly evil character was the actual villain (which I won’t name here because spoilers). Yi Ryung is a brat, but she’s not evil and doesn’t try to do evil things. Is she mean? Yep. Does she try to embarrass her nemesis? You bet. But it’s not like she tries to get Gong Sil run over by a truck.

ANNA: I thought the number of times she got turned down in her romantic conquests made her seem much more sympathetic than the typical female second lead. Really, the entire main cast of the show was so quirky and memorable.

I have to say I really enjoyed the way Gong Shil’s need for ghost repellent caused her to get handsy with Joong Won at every opportunity. It was an amusing relationship dynamic that we don’t see very much in kdramas.

EVA: I really liked the way Joong Won’s character developed over the course of the show. Gong Shil’s need for his protection forced him to interact with people in a way he hadn’t since his kidnapping. As a result he learned empathy, humor, and that not all people suck. I was absolutely delighted the first time he smiled. It wasn’t until then that I realized he hadn’t smiled at all (smirks don’t count) in the first, what?, twelve episodes?

ANNA: I also enjoyed the way Joong Won’s character developed! I also thought that the central mystery for the show with the truth behind Joong Won’s kidnapping was well done. I was a little bit disappointed that some of the development towards the end of the series for Gong Shil happened off screen, but she had changed so much already throughout the course of the series.

EMILY: I liked how Joong Won accepted Gong Shil’s eccentricities. Her problem is a bit unusual, but he rolled with it fairly well. In particular, I liked his relationship with that ghost in the mall that communicated via trash can. I also appreciated how blunt he was in admitting his feelings. There was a bit less denial and dancing around emotions in this show than in typical kdramas. Everyone felt things strongly and expressed it right away. I could have done without the obligatory kdrama amnesia plot, but even that was not dragged on for too long. All in all, this is another solid show from the Hong Sisters, who prove once again how good they are at taking a standard kdrama plot and tilting it just a bit to make it fresh and enjoyable.