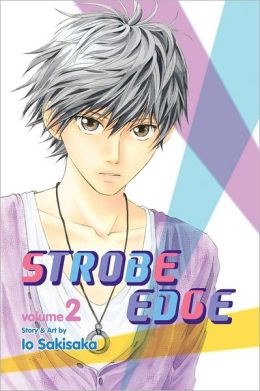 Ah, the tangled web of love. After being shot down by school hotie, Ren, Ninako is trying to adjust to life in a post-rejection world. The poor girl has been told by the guy she likes that he’s not interested after she told the guy who is interested in her that she wasn’t interested! Now that the whole school knows, she is trying to figure out the “what now?” It’s not fair when that happens to someone but to her credit she’s trying to deal with it. Though, there are a couple of moments in this volume where she kind of scares me with something along the lines of “I still love him but I’m happy to be around him.” That is a recipe for disaster but who wants to listen to little old me? Anyways, the point of this volume seems to be that section in the guidebook where you really should let sleeping dogs lie. Ninako doesn’t seem to disengage from Ren, in fact she’s over the moon that they will be attending school council meetings together. I feel that she is trying to live off the embers, as it were, of her infatuation with Ren. I really love her earnest wish to be around her currently-not-to-be beau but I can’t help but feel she’s going about it in the wrong way.

Ren for his part almost seems to not notice that the girl who confessed to him is now hanging out with him. Now, the author looks like she’s skirting this issue by showing us the rejected girls club, a group of girls who have been rejected by Ren alone, and their snotty attitude toward him. But after Ninako rejects (lot of rejections going on in this volume) their ideas, she is then ostracized from a club she didn’t want to be part of. Wait, what? We then get them bullying her in minor ways for the remainder of the volume. Does this happen to Japanese girls or girls in general? If it does, man that is a sad way to conduct yourself. While I’m sympathetic to Ninako and her plight, the fact that she still likes Ren even after she tells us, the reader, that she knows Ren has a girlfriends is kind of weird. What is she trying to accomplish by doing this? She isn’t a bad person so she wouldn’t try and steal Ren from his girlfriend, Mayuka. But she still wants to be around Ren? Sorry, I don’t get it. On the other hand, Ren spends much of this volume going from cold fish to says hi to Ninako to getting into an embrace with Ninako. No wonder the girl doesn’t know which way is up.

Another thing I don’t get is Daiki. He is Mayuka’s younger brother and the guy who Ninako rejected. He spends the entire volume chasing around after Ninako or getting in classmate Ando’s face (more on him later) for being so brazen as to ask the girls for their numbers. Daiki is my least favourite character because, and I’m just giving my initial impressions of him here, he comes across like a sore loser in this edition. Like someone took away his beloved toy and won’t give it back. I understand he’s just as hurt by Ninako as she is with Ren but there’s no excuse to treat other people this way. On the subject of Ando, he is a great element to the cast. He’s a disruptor, coming in and hanging out with Ninako and making her goes places with her. He seems to be just another cad but then he has an interesting conversation with Ren when they witness her standing up to the Rejected Club. More or less, he warns Ren not to treat Ninako to same way as the other girls he rejected. That is a strange statement to make. He, ostensibly, doesn’t know Ninako until he joins the class so why would he say this? Could this mean he knew Ninako before and she doesn’t recognise him? I’ll be interested to see volume three for a clarification. Ando seems to be fresh with everyone but he skirts a fine line between being outgoing and being a complete flirt. Is he really into Ninako or is he playing? When he kisses Ninako on the head, he does seem upset that he upset her.

One thing that bothered me more than the up and down character reveals was that I couldn’t recognise a lot of the girls in this volume. Io Sakisaka is a good artist with wonderful designs so the fact I have to stare at each girl’s hair style to recognise Ninako or others is a little much for me. It’s not a major thing but it did become distracting through the middle of the book.

The series looks like it is a lock for my ongoing pile in a way that I haven’t been able to attach to Sakura Hime. I’m interested in the characters plight (yes, even Daiki) so I want to see how things start to turn out for them.

Little bit of housekeeping here, readers. You may have noticed that it has been around four months since my last post here on Manga Bookshelf. First, my apologies to you and also to Melinda who basically left me alone to sort out my stuff. For the purposes of letting you guys understand that I wasn’t just sitting on my duff, scratching my proverbial, here’s what happened to me over the summer. First, I effectively lost my job. It was a nice job, I liked it but it didn’t like me and the people where I worked couldn’t have been more accommodating to me but c’est la vie. Next, I got a bad respiratory infection that wouldn’t go away. It wasn’t serious but it kind of kills your ability to like reading manga. Lastly, writers block set in whenever over the month of August I tried to read anything. Just a wave of “ugghhh” set in whenever I tried to concentrate. But that’s all done with now and I’m looking forward to posting the end of the Sailor Moon series and seeing how that turns out. So, thanks for sticking with me, readers and I promise I won’t do that again.