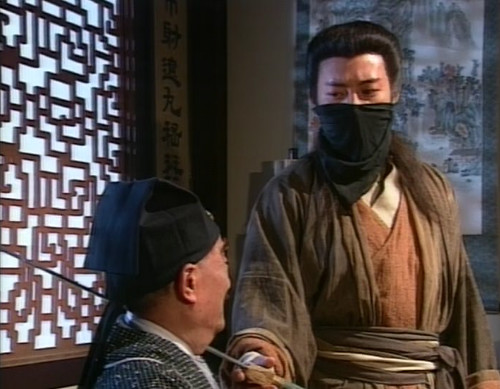 Linghu Chong is asking for a ‘donation’.

This TV theme does not stand out at all. It is a very typical wuxia TV show opening theme. Whereas the Laughing in the Wind theme says ‘This is not your typical wuxia drama’, the State of Divinity Theme says ‘Another standard TVB wuxia drama coming right up!’

This difference in approach explains a lot of what makes these two adaptations feel different.

Example Scene: Why This Show Is So Addictive

This scene is not particularly special, but it is precisely because it is not special that it is good for demonstrating how State of Divinity keeps ratcheting up the tension to keep the audience hooked (of course most of the credit goes to Jin Yong, who wrote the novel). I am going to translate the scene (with abridgements), and whenever something happens which increases the tension, I will increase the font size. Ready?

This is a dinner party hosted by Liu Zhengfeng, where everybody is polite. They won’t stay polite for long.

Yu Canghai: Yue Buqun, you’re looking younger and younger! Apparently the Violet Mist Divine Skill is extending your life.
Yue Buqun: You flatter me, my skills are nothing much really. But you look like you are in excellent shape.
Yu Canghai: Oh, you are much too polite.
Liu Zhengfeng: Welcome, Yue Buqun and Yu Canghai.
[polite talk that I’m not translating]
Liu Zhengfeng: Ah, Abbess Dingyi has arrived. Oh, and the Huashan Sect disciples have also come. Welcome, welcome!
[more polite talk]
[but Abbess Dingyi looks displeased]
Yue Buqun: Abbess Dingyi, is there a problem?
Dingyi: Ah, it is best that you are here. I want an explanation.
Yue Buqun: What do you want me to explain?
Dingyi: Your unbridled disciple Linghu Chong’s absolutely unexcusable behavior. 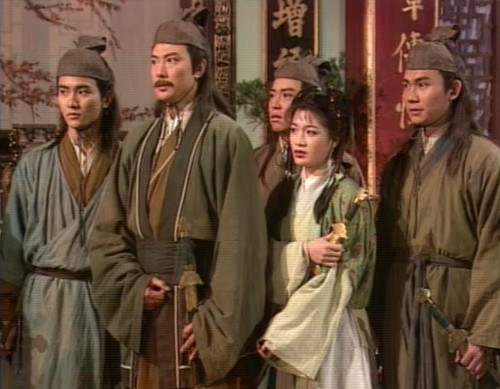 Yue Buqun: Though my disciple is a bit mischievous, he’s always been frank and outspoken. If he’s said anything which offended you, I will apologize for him.
Liu Zhengfeng: Let’s discuss this slowly and calmly, and keep the peace.
Yue Buqun: Yes.
Dingyi: Yue Buqun, please bring your horrid disciple Linghu Chong out immediately!
Yue Buqun: Bring him out?
Dingyi: Your horrid disciple is associating with that rapist Tian Guangbo, and they kidnapped my disciple Yilin!

[tension goes up]
Yue Buqun: That is impossible. Though Linghu Chong often misbehaves, he would never do such a thing. There must be a misunderstanding.
Dingyi: This is completely true. Taishan Sect’s Tian Songdao saw it with his own eyes! And Yu Canghai’s disciple Mai Renda also saw it!

[tension goes up]
Yu Canghai: My disciple saw it? Then it must be true. [laughs] I never would have though that the great ‘gentleman sword’ Yue Buqun would train such a base disciple! [laughs more] 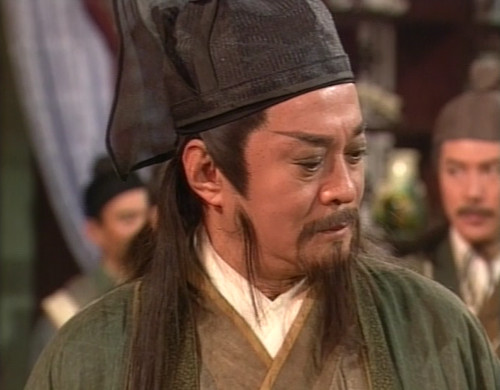 Yue Buqun: Abbess Dingyi, I feel that what you said still leaves room for doubt. Alas, Linghu Chong isn’t here now to tell his side of the story. For the moment, we cannot get to the bottom of this.
Dingyi: You think that just because Linghu Chong isn’t here, you can clear yourself of this matter?!
Yue Buqun: That’s not what I mean, but…
Taishan Sect Person: Linghu Chong, you scum, bring your ass out now!
[The Taishan Sect comes in with two bodies, one dead]


[tension goes up]
Taishan Sect Person: Linghu Chong, you monster, I am going to kill you!
[Liu Zhengfeng approaches one of the bodies, which is still moving]
Liu Zhengfeng: How did Tian Songdao get so severely injured? Who killed Chi Baicheng?
Tianmen Daoren: It was that rapist Tian Guangbo! Yue Buqun, bring out that Linghu Chong immediately!
Lingshan: What does the fact that Tian Guangbo attacked your disciples have to do with Brother Linghu Chong?
Tianmen Daoren: Though Linghu Chong didn’t kill him himself, it’s Linghu Chong’s fault that he died! He injured my disciple, killed my disciple, and Linghu Chong sat and did nothing! He should pay!
[sounds of agreement]
Liu Zhengfeng: Tianmen Daoren, let’s slow down a little. How could Linghu Chong be with Tian Guangbo? We should wait for this to be fully investigated. If Linghu Chong did do something wrong, I will persuade him to change his ways.
Tianmen Daoren: Persuade him to change his ways?! We should expel him, and take his head!
Lu Dayou: Tianmen Daoren, you’re taking this too far! Brong Linghu Chong hasn’t killed anybody, so nobody should execute him!
[Yu Canghai, leader of the Qingcheng Sect, is still smiling]
Dingyi: Who says he hasn’t killed anybody? He killed someone from the Qingcheng Sect!
[Yu Canghai stops smiling] 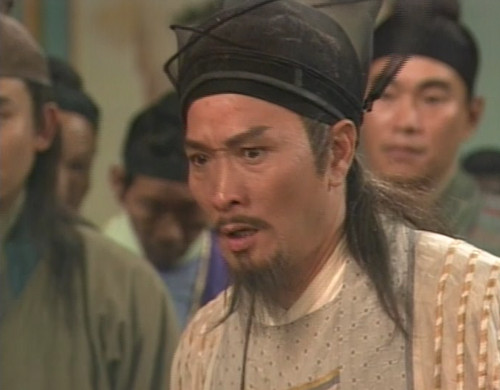 This is Yu Canghai *not* smiling.

[tension goes up]
Yu Canghai: WHAT! Linghu Chong killed one of my disciples? Killed who?
[The Qingcheng Sect disciples enter with a dead body] 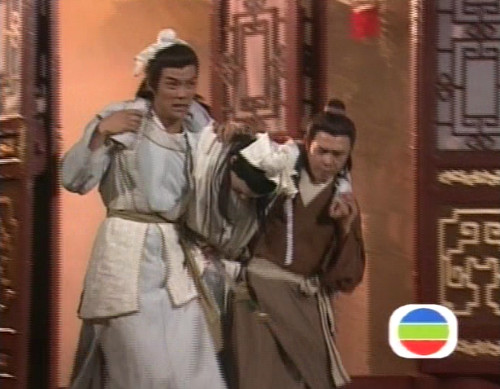 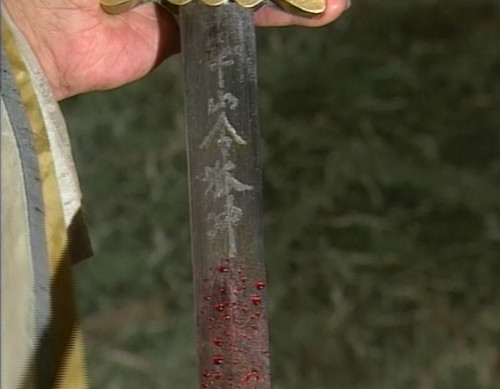 [tension goes up]
Yu Canghai: It’s proven that Linghu Chong did this, what do you say now, Yue Buqun?
Yue Buquen: This is definitely Linghu Chong’s sword. Yu Canghai…
Yu Canghai: You’re still defending your disciple?! You hypocrite!
Liu Zhengfeng: Yu Canghai, you have my deepest sympathies. But it has not been proven beyond all doubt that Linghu Chong did this. If we keep going on like this, I fear we will break the peace … we must find and question Linghu Chong. What do all of my guests think?
Yue Buqun: Brother Liu, you are right. Denuo and Dayou, go out and bring Linghu Chong here.
Denuo and Dayou: Yes, shifu.
Yu Canghai: You three, help them find Linghu Chong. I don’t trust that Yue Buqun won’t try to shelter him.
Qinggcheng Discipes: Yes, shifu.
Liu Zhengfeng: Danian, send someone to help them find Linghu Chong and Yilin.
Danian: Yes, shifu.
Liu Zhengfeng: Abbess Dingyi, don’t worry, we’ll soon find your disciple Yilin.
Yilin: Shifu!
[Yilin, the nun who was ‘kidnapped by that rapist Tian Guangbo and the horrid Linghu Chong’ enters]
Dingyi: Yilin!

[tension goes up]
Yilin: [weeping] Shifu, I never thought I would live to see you again!
Dingyi: Yilin, don’t cry. Shifu asks you, did you see that horrid Linghu Chong?
Yilin: Brother Linghu? [Yilin weeps some more]
Dingyi: Don’t cry! Tell shifu, did you see him or not?
Yilin: Disciple did see Brother Linghu.
Dingyi: Where is he?
Tianmen Daoren: Yes, where is Linghu Chong?
Yilin: Brother Linghu … he’s … he’s dead.
Huashan Sect People: Dead!
[I should point out that Linghu Chong is *the main protagonist*. And this is episode 6 out of 43 episodes. Therefore, the tension practically leaps into the air here. However, for technical reasons, I am not going to increase the font size to 50] 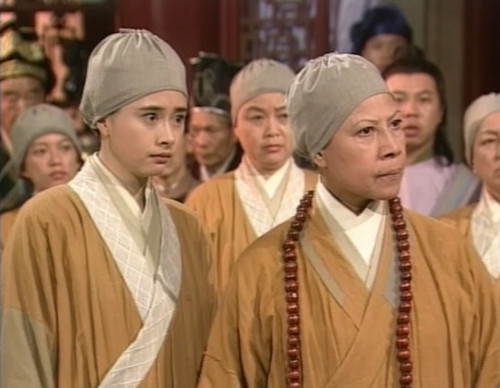 Lingshan: Sister Yilin, who did you hear this from?
Yilin: I saw it with my own eyes.
[Lingshan faints]
Huashan Sect Disciples: Sister!
Yue Buqun: Take her back to her room.
Huashan Sect Disciples: Yes, shifu.
Yu Canghai: Well, it’s best that Linghu Chong is already dead. It looks like I won’t have to sully my hands by killing him.
[Yue Buqun gives Yu Canghai a stare]
Yue Buqun: Yilin, do you know who killed Linghu Chong?
Yilin: Linghu Chong … was [points at dead Qingcheng disciple Luo Renjie] killed by him!
Yu Canghai: [expletive], my disciple Luo Renjie was clearly killed by Linghu Chong! Are you saying that my disciple is Linghu Chong’s murderer?! What logic is this!
Yilin: Brother Linghu really was killed by this bad man!
Yu Canghai: You DARE SAY THAT! The people of my Qingcheng Sect are bad people? All of your Five-Mountain-Alliance people are good people, eh?
Yilin: I didn’t say that Uncle Yu was bad just … just that he [pointing at the body] is bad.
Yu Canghai: You… [approaches Yilin, Dingyi blocks him]
Dingyi: You dare threaten my disciple! Yilin, don’t fear, your shifu is here to protect you. Please explain to everybody exactly why he [pointing at the body] is a bad man.

I could keep translating, but I think you already understand why it was hard for me to stop myself from watching this (even though I already know the story). Suffice to say, it’s an interesting dinner party.

I have summarized the story already hereand here. Instead of summarizing it again, I will offer this quote from a minor
character, Huang Zhonggong, which I think sums up the essence of the story: 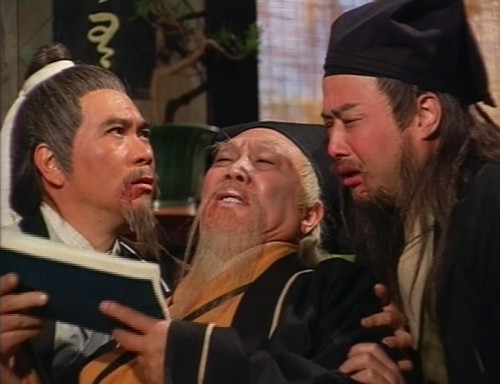 “When we four brothers first entered the Sun Moon Cult, we thought we could carry out heroic deeds all over jianghu. Who knew that Ren Woxing [leader of the Sun Moon Cult] was so violent, and so hungry for power? Long after we four brothers had been disillusioned, Dongfang Bubai became the leader, and he loves wickedness even more. He executed all of the elders, and we four became even more disheartened. We decided to retreat to Plum Villa, and guard the prisoner. Firstly, far from Heimuya [headquarters of the Sun Moon Cult], we did not have to participate in all of the internecine struggle and backstabbing. Secondly, we could quietly live by Xihu, and fill our days with music and books. We can say that we have had twelve happy years. Nevertheless, in life the sorrows are many, and the joys are few. That is the nature of life.”

Just after saying that, Huang Zhonggong dies. With a few changes (i.e. replace ‘we four brothers’ with ‘Linghu Chong’), this would be an even better summary of the entire story that what I wrote.

I also suspect there is a touch of autobiography. The China where Jin Yong grew up was torn between various groups vying for control. In high school, he was punished for insulting the government in power.

As an adult, he moved to Hong Kong, where he has definitely lived a life full of books and letters … yet he could do almost nothing about the political situation in China. Many people say that Jin Yong had supported the Chinese Communist Party (some people say he is still a communist). This novel was written during the Cultural Revolution.

I am far from done…

So come back next week for Part 2!