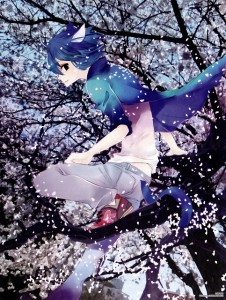 We’ve come to the end of the Yun Kouga Manga Moveable Feast! Though participation was undeniably low, we’re excited about the contributions that were made to the Feast. Here’s a roundup from the past few days:

I weighed in with a new 3 Things Thursday, in which I picked out three (ish) of my favorite female characters from Yun Kouga’s catalogue, including one from Earthian, which I read for the first time this week.

Some manga seems a bit too edited or mass produced. Unless you’re seeking out manga from some of the more alternative magazines, most mainstream manga isn’t all that weird. The pinnacle of enjoyable manga weirdness in my mind is Est Em’s Working Kentauros. That manga about the slice of life tribulations about Centaur salarymen provides the reader with a peak into a manga creator’s subconscious and ability to be creative without boundaries. Loveless isn’t as unconventionally weird as Working Kentauros, but its combination of cat people, light bondage, magical battles, mysterious organizations, abusive parents, master/servant relationships, and occasional licking definitely add up to a manga that’s a bit more distinctive and quirky than one might expect.

And it’s all Loveless, all the time as Michelle & I celebrate our 100th installment of Off the Shelf with an epic discussion of the series – Off the Shelf, MMF Edition: Loveless:

This wraps up the Yun Kouga MMF! Many thanks to everyone who participated. The complete archive can be found here. We now make way for the Boys’ Love MMF, to be hosted in August by Khursten Santos at Otaku Champloo!