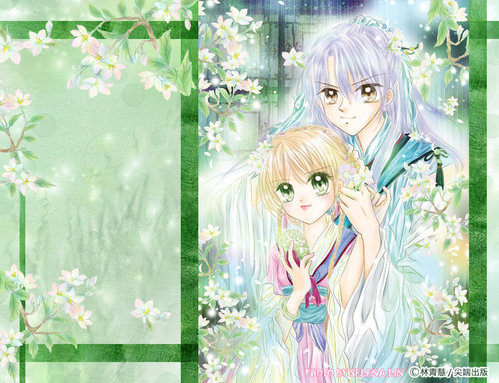 It’s about time I said something about Selina Lin, one of Taiwan’s most popular female manhua artists. Though she’s sometimes called the “queen” of girl-oriented Taiwanese manhua, all of her works are quite short. Burning Moon, her longest work, is only five volumes long. 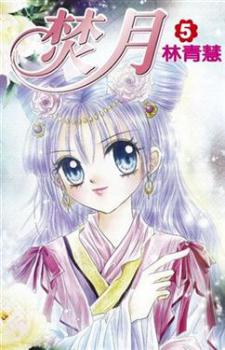 The emperor’s concubine wants to maintain her status by bearing a son. The problem is that she bore a girl, so she wants to swap her newborn daughter with her sister’s newborn son, Duan Chengfeng. To prevent him from getting kidnapped, Duan Chengfeng’s mother poisons him. His father intervenes, but to fend off future kidnapping attempts, Duan Chengfeng has to live as a sick child.

Duan Chengfeng gets pretty tired of this, so as a boy he sneaks out to experience a bit of freedom. That’s how he meets a girl called Yue Shuchan. Realizing that their son doesn’t want to live the rest of his life with his freedom confined, his parents decide to drop the illness ruse and arrange a marriage for him…

All of the explicitly girly manhua I’ve covered so far came from Star Girls magazine. That’s because it’s the only magazine dedicated exclusively to girly manhua put out by a major publisher. However, there is also Mon-mon magazine (the name in Mandarin is “mèng​mèng​,” and “mèng​” means “dream”). Most of the comics which run in Mon-mon magazine are shojo manga translated from Japanese, but they also publish original material from local artists, of whom the most popular is Selina Lin.

The latest issue of Mon-mon.

Selina Lin’s work has been translated into quite a few languages, but the only two works that I could find which have been officially published in English are:

1) White Night Melody (the first volume was published by Tokyopop, and I suspect this will never be license-rescued)
2) Manga Tarot, which technically is a card deck, not a comic book.

This was originally supposed to be only three volumes long, but readers felt that the original ending was too tragic, so Selina Lin wrote two more volumes set in the present day, featuring the reincarnations of the original characters, and made a happy ending.

I do not like the art style of shoujo manga currently coming out of Japan, unless it’s retro, and that’s one of the reasons my interest in current shoujo is … limited. What I love is a) Showa 24 group artwork and b) late 80s-90s shoujo artwork.

Selina Lin’s art is very much like current shoujo styles in Japan … but somehow, she gets me to actually like it. 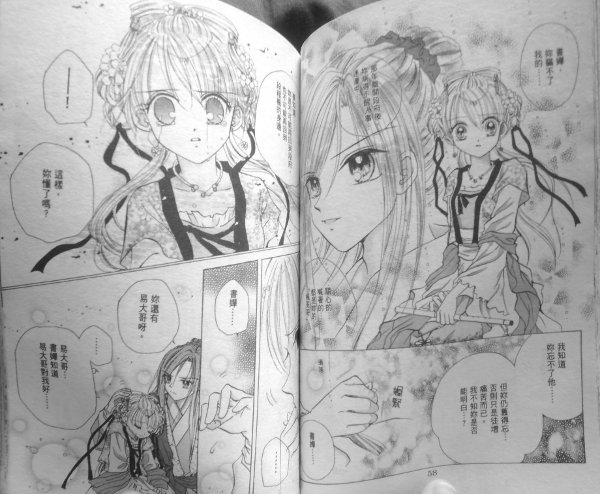 Take this picture for example. Though it features the “cute” glass-eyed look which I dislike, it’s got lots of nice round curves, with nice crisp folds in the dress and dark ribbons to add some visual structure. I can dig this.

And even when it’s being “cutesy,” it also manages to have a bit of a crystal quality a well—the pearl-like roundness, the crisp patterns—which neutralizes my usual distaste for this style. 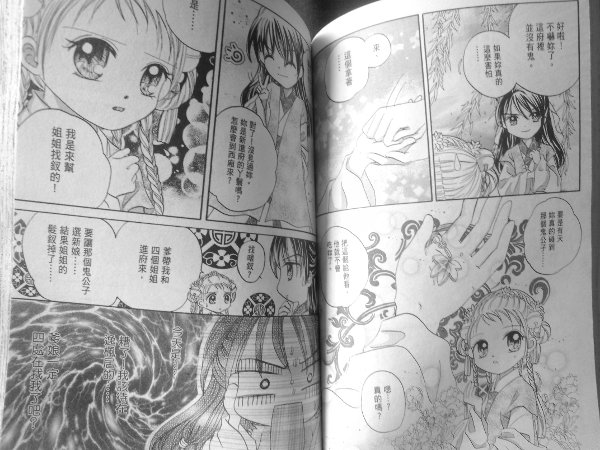 Of course, in a storytelling medium, it’s not enough for art to look nice; it also has to tell a story. Is the artwork a little too busy? Perhaps. However, I think it does a good job of letting the characters express themselves, such as in the following picture: 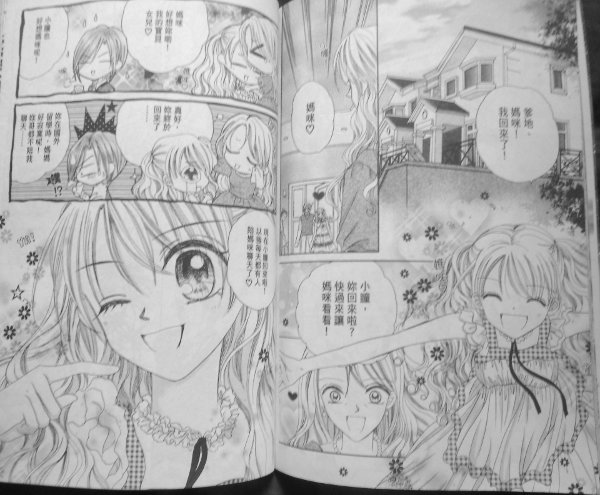 I can feel the warm, light-hearted joy.

Now, speaking of the storytelling…

One of the reasons I’ve waited so long to discuss Selina Lin is, well, I think her stories are boring. I was hoping that, as her longest work, this might be better, but …. well, it’s not much better.

It’s not that the ideas are bad. For example, Duan Chengfeng could have been a really, really interesting character—someone who is forced to pretend to be ill for his own safety as he itches for adventure can be the basis of a really engaging story. However, this potential was wasted. The manhua covers too much plot in too few pages, so there’s no room to explore the inherent conflict in Duan Chengfeng’s situation. As soon as the love triangles come into the story, Duan Chengfeng’s problem with having to feign illness get dropped, which makes it seem like it wasn’t important in the first place.

And the romance … I actually do believe that love at first sight can happen (or at least, that people can fall in love with each other at lightning speed). But even when the bond is established instantly, it still has to grow and evolve. In all of the romantic relationships in this story, I felt there was no growth. Instead, the storyteller just said, “Okay, these people are in love with each other,” and didn’t offer much more. That makes the whole romance angle of the story feel empty to me.

Normally, I would have been stubborn and read all five volumes. However, considering my previous disappointments with Selina Lin, I did not feel inclined to read beyond Volume 3. After reading a plot summary of Volumes 4-5, I feel even less inclined to finish the series.

I don’t know much about how Mon-mon magazine works, so perhaps there are editorial constraints which make Selina Lin limit most of her manhua to three volumes. But even if the length of her work is being limited by her editors, she should tell a story which fits a three-volume length, instead of telling a story with much plot and little substance.

Well, it’s never been licensed in English… and to be honest, I don’t think it should be.

Selina Lin makes me like an art-style which usually turns me off, which is an accomplishment. That said, I dearly wish her storytelling was as good as her drawings. Her stories aren’t even bad, they’re just poorly executed.

I don’t get why she’s so popular. Sure, the art is nice, but her manhua simply bores me.

Maybe she should team up with somebody who is a much better storyteller.

Next Time: Love in the Rain / Yanyu Mengmeng (TV drama), which most certainly is NOT boring

Since her last post at Manga Bookshelf, Sara K. has soaked in one of the only three mud hot springs in the world, visited a bat cave, walked a trail with a 60 degree gradient (downhill, thank goodness), seen fireflies for the first time in her life, had her blood sucked by wild leeches, seen trees that are over 2000 years old, visited the “forgetting sorrow” bamboo grove, saw a wild male Swinhoe’s pheasant, went to Taiwan’s highest automobile-accessible mountain pass, dealt with her computer going haywire, bought her first new computer in over two years, went hiking above 3000 meters with someone who grew up in Soviet Russia and someone from South Africa, learned how to play Perudo, ate a wonderful meal of mountain vegetables she had never knew existed at a restaurant over 2700 meters above sea level, saw a bunch of beautiful waterfalls and forested hills, saw the beginning of the Matsu Pilgrimage (with over a million participants, it’s one of Asia’s biggest religious pilgrimages), and much more. It was way, way, WAY more interesting than this manhua.