SEAN: The main problem with my list of manga that’s coming out is it originated on my Livejournal page as a list to remind me what *I* might be getting at any given time, with the titles I wasn’t buying included because well, why not? As a result, I tend to keep these lists geared towards me. With that in mind, here’s a breakdown of the sources I use:

a) My comic shop in New Haven. This is mostly via Diamond Distributors. “But Sean,” (I hear you cry), “Diamond is showing Yen’s stuff coming out the week of 2/27, not 2/20!” Yes, but I got Yen stuff on Wednesday, including this Umineko volume that is as big as a small house. This is because Diamond sometimes splits its shipments over two weeks, shipping to some stores (such as the Northeast Corridor) before others. This happens to me a LOT with Yen, which I frequently get early.

b) Midtown Comics list, which goes live sometime Wednesday Afternoons. They have their own distribution for many publishers (i.e., not Diamond), including Viz and Seven Seas. This is why they sometimes have Viz titles a week late, and frequently have Seven Seas titles very late. This is what allows Aaron to list the same Seven Seas titles in comments over multiple weeks. :)

c) Amazon, where I usually fill in the blanks from the other two lists.

With that said, almost everyone who isn’t me will get Yen Press titles the week of 2/27, so just port those over to this list. 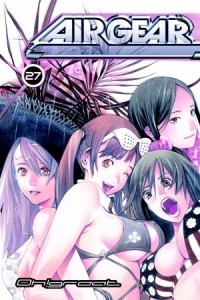 So what ELSE is coming out next week? Kodansha, mostly. We have the 27th volume of Air Gear, which ships only a few months before they try to entice in new readers with the Air Gear omnibus. For me, though, the prospect of Tenjo Tenge-style fanservice plus rollerblading has always left me a bit cold.

MICHELLE: Yeah, I have never been able to muster the fortitude to try Air Gear.

MELINDA: Nor have I.

SEAN: Battle Angel Alita: Last Order hits Vol. 17. I got way, WAY behind in this series (as in, I still have to finish the original non-Last Order Alita), so I suspect I’ll just wait for the omnibus. Which has new content anyway, apparently.

MICHELLE: I have the first three volumes of the original series, but I still haven’t read them. One day!

SEAN: Cage of Eden is up to Vol. 9, and will be resolving its psychic arc while no doubt showing that there are a lot of large-breasted females and hideous carnivorous animals in it. As I said, the perfect comic for 12-year-old boys.

MICHELLE: My Air Gear comment can easily be applied here as well.

MELINDA: Mine, too. Wow, I have so little of interest to say this week!

SEAN: And Kitchen Princess hits its third omnibus. I don’t have much to say about this, except it’s great shoujo that for once you could actually give to a young girl to read – well, mostly. It can get a bit dark at times.

MICHELLE: I can’t believe I’ve owned this series for so long without reading it even though I’ve heard very good things about it! Bad me.

MELINDA: I missed this series the first time around, so I’m pretty happy to have a chance to catch up now! 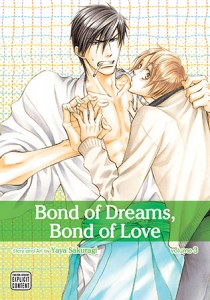 SEAN: I have no idea if Bond of Dreams, Bond of Love is any good, but the covers are magnificent. The lead male, despite his gigantic chest of death, still appears to be the grumpiest man on the planet, and his companion is the perfect contrast, having a face that anyone would love to hit. Seriously, look at that “Oops!” face. Anyone would understand why the big guy is so mad. Well, besides “Why did they draw me so wide…?”

MICHELLE: I read the first two volumes of this and didn’t like it very much. The shrimpy guy is just as annoying as he looks and I have no idea what the grumpy dude could possibly find to like about him. I don’t intend to bother reading any more of it.

MELINDA: My biggest issue with this series (aside from finding it just kinda boring) is that the drawing style and the age difference—particularly in one scene early in the first volume—give it a shotacon vibe I just can’t stomach. It’s definitely Not For Me.

SEAN: Assuming anyone stuck around after the meandering opening, what’re you getting?