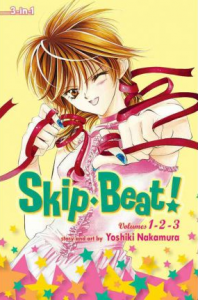 Kyoko just wants to be with her boyfriend, Sho. That’s all—simple enough request. Trouble is Sho’s not really into the whole “love and respect” thing. He’s also not into the whole “tell the truth” angle in a relationship. Sho is coasting towards being a superstar pop idol (whatever the hell that is) but isn’t quite there yet. Still, he thinks things are secure enough that he makes the mistake of blabbing to his REAL girlfriend about how he’s playing with Kyoko and would dump her in a heartbeat. Soon Kyoko has no boyfriend, no life, and no reason to go on.

Kyoko should have paid attention to the axiom: “Revenge is a dish best served cold.” After Sho dumps her, Kyoko’s only purpose in living is to destroy Sho and beat him at his own game. By “beating him” I mean that she’s going to become an idol like him, and by “destroying him” I mean in the Doctor No, James Bond villainy sort of way. You know things will not stay calm when the lead character is delirious over the idea of her enemy’s destruction.

The main thing I took from my reading of this manga is that victories over your enemies are often hollow. Kyoko, for all her wild plotting to destroy Sho, sometimes hits brick walls. Her first order of business after vowing revenge on Sho is to join L.M.E., the rival talent agency to Sho’s. But she thinks that raw anger is enough to carry her through the auditions. When she’s rejected, she curls into a ball. Only the poking and prodding of friends and rivals gets her going again. It’s like every time she hits an impasse, Kyoko reverts back to the day after Sho left her. Luckily she doesn’t waste time, and like every good leading character, she comes back better than ever.

Of course, the supporting cast of this story has to be good to keep up with such a manic main lead. The family that employs Kyoko in one of two jobs she held while supporting Sho spends their time fretting about her, just like her real parents would. The patriarch in that family is one of my favourites. He pretends to be gruff, but really has that Burgess Meredith coach-like toughness. Another person who antagonizes Kyoko into action is Sho’s rival, Ren Tsuruga. Ren is everything Sho isn’t: quiet, reserved, and methodical. But every time he and Kyoko get close, he says something to deliberately make her mad. Is he going for this tactic because he sees something in her? Possibly—he does make cryptic remarks to his assistant with that in mind. More often than not, his observations coincide with lessons that Kyoko has to learn the hard way. Is he saying what he’s saying because he’s been in her shoes or because her motives are so transparent? Interesting how that question is not resolved in this volume.

I haven’t spoken too much about Sho. The reason is, he feels somewhat one-dimensional. When the big reveal shows him to be a cad, playing with Kyoko’s heart, all he’s short of is having the moustache and twirling it—he’s that evil. But afterwards, he’s shown to be clueless and unaware of the horrors he’s caused for our heroine. So this leads me to conclude that either the author didn’t know quite what to do with him after the initial chapters, or that he was always this inept and Kyoko was just too blinded by love to see it. Resolutions, I require them.

The most enjoyable parts of this omnibus occur after Kyoko joins L.M.E., where she is put into the agency’s version of the morale maintenance squad. There, she must play general dogsbody to the rest of the employees in order to gain points, which means that if she cheeses off the wrong person, points will be taken away. Kyoko spends her time thinking she’s done a good job only to have her work undone by one trip up—sometimes in the service of comedy, other times for dramatic effect. Either way, it’s another way to gauge her progress as a character.

It’s great to see a female protagonist engage in the kind of antics reserved for comedy manga. The way Kyoko describes how she will destroy Sho is incredibly rewarding, and Yoshiki Nakamura’s artwork makes light work of putting Kyoko’s narrative across. The characters around her can almost sense what she’s done or what she’s thinking in these moments (usually with a murderous intent), and their reactions are as satisfying as hers are.

As the volume progresses, the cast begins to include other people from L.M.E., like the manager of the new recruits section who has to put up with Kyoko haunting him day and night in her quest for a place at the agency. The president of L.M.E. wins the prize for most flamboyant character in the volume (mind you, it’s set around a talent agency which has naturally flamboyant people in it!) who takes a personal interest in Kyoko. His tests are where Kyoko hits most of her brick walls, but he seems to be waiting for her to “get” something that she’s not paying attention to. Hopefully either Kyoko figures out what that is or his actions get some kind of sharper clarity in further volumes.

I didn’t think I would like Skip Beat as much as I did. Coming late into shoujo romance, I don’t always know what is considered standard in the genre and what’s not. When you get past the funny parts of this tale, you are still left with a girl who has been hurt by someone she trusted and cared for and who must now find herself, her place, and her self-respect again. I can relate to this and I’m sure you reader can too. Shojo Beat had earlier indicated that Skip Beat’s omnibus’ might not keep going—I would presume due to low sales—but recently they confirmed that they would be continuing with these releases. These omnibuses are a great way for new readers to make their way in and I recommend reading these rather than trying to dive into the latest volume (which is on volume 30 now as far as I know).

Sailor Moon will be back in March with two reviews for volumes seven and eight. Are you looking forward to it returning to the column? If not, why? Please leave a comment or send me a tweet to me or the official MBS twitter account.