SEAN: Let’s see if I can sort out this week, given my recent habit of taking Midtown’s list and then ignoring it horribly.

First of all, they’re finally getting in the Yen Press books that most of us got last week or this week. I’ve gone over those already, but FYI they are Black Butler 12, Black God 18, Book Girl and the Undine Who Bore a Moonflower, A Bride’s Story 4, The Disappearance of Nagato Yuki-chan 3, and Soul Eater 12.

Udon has a Super Street Fighter series debuting, with what seems to be Korean artists and American writers. Um… a must for Street Fighter fans? I dunno, I got nothing. How Do I Capcom?

MICHELLE: Yeah, sorry Udon, but this just doesn’t appeal to me.

MELINDA: I always want to like things with Korean artists, just on principle, but… meh. 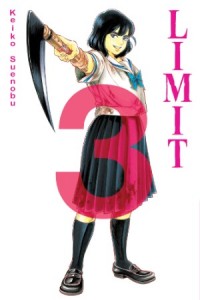 SEAN: Vertical has the 3rd volume of Limit, their shoujo experiment that is not selling all that hot so MORE PEOPLE should buy it as it’s excellent. Come on, doesn’t that cute young thing on the cover scream adorable shoujo? I bet there are some wacky misunderstandings in this volume!

MICHELLE: And probably it is Valentine’s Day!

ANNA: I like to think of Limit as a lovely violently cynical sorbet that cleanses the palate of manga readers who have been reading too much shoujo with wacky misunderstandings.

SEAN: Meanwhile, Kodansha is releasing a lot of stuff next week via Amazon that’s not hitting comic shops till February or later. Given next week also has a pile of Viz, why don’t we run down Kodansha now? If nothing else, it will broaden the Pick of the Week a bit.

First off, Bloody Monday was out this week. It’s up to Volume 9 of about 11, which wraps up the ‘First Season’. I think, when asked about the Second and Third Seasons of the series, Kodansha made ‘well, buy more’ noises. So buy more if you want to read more of ’24: Japan’.

MICHELLE: I really do mean to read this one of these days.

MELINDA: I enjoyed the first volume, but I guess not enough to propel me further on. Should I feel regretful?

SEAN: Fairy Tail is starting to get ready to speed up, which means more volumes online on its digital Apple-only thing that I don’t use as I don’t have Apple (this grump brought to you by Android), but also print volumes about once a month or so. It hadn’t sped up quite yet, though. In the meantime, we’re still in Edolas, though we may be about to wrap that arc up.

MICHELLE: I occasionally forget that Fairy Tail exists, even though I’ve read 14 volumes of it.

MELINDA: I’ve never had any interest in Fairy Tail, yet I’d really like to develop some, if only because Hiro Mashima was so incredibly charming at NYCC a couple of years ago. Convince me?

SEAN: Um… it’s good solid shonen, and has finally, I think, stopped trying to be One Piece only for Kodansha. It has a few good female characters, though it waffles quite a bit on how strong they get to be (but that’s typical for most Japanese shonen). It’s quite funny at times, and not in a “boobs!” way. (That said, there are many, many stacked girls here.)

Mostly, though, I think it’s the sort of title that you start of hoping gets better and really improves by the time you’re 16 volumes in and invested in the world. It rewards long-term investment. Which can be a pain, I know.

SEAN: Genshiken finishes off its Omnibus Releases with the 3rd, covering Vol. 7-9. Nice timing, as I suspect the new anime of Genshiken 2nd Season coming up may spark interest in the first again.

Another series bites the dust, as Vol. 4 wraps up Miles Edgeworth: Ace Attorney Investigations. Barring the appearance of an Apollo Justice manga (don’t hold your breath), this may be it for this franchise for the time being – at least in manga form.

Speaking of series almost being finished, 37 is the 2nd to last volume of Negima. I’ll have a lot to say about this volume and the next. A whole lot. That said, if you like an overabundance of fanservice in the best old-fashioned Akamatsu ways, this is the volume for you. 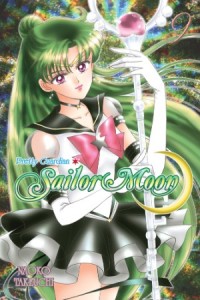 MELINDA: Thank goodness we have Sean to care about Akamatsu on our behalf.

SEAN: Aheh. Let’s just say that my comment that Negima should have ended with Vol. 36 will be followed up on. My *least* favorite part of Negima is the naked antics.

SEAN: Lastly, Pluto graces the cover of Sailor Moon Vol. 9, and I think she actually even shows up in this, though not till the end. In the meantime, we’re really delving into the Super S arc now, which means dreams, and mirrors, and unicorns, and lots of Chibi-Usa (though less than you’d expect).

MICHELLE: Yay, Sailor Moon! I might’ve said this last time—probably I did—but the manga version of Super S differs from the anime in that the outer senshi are in it, so it’s worth reading even if that season of the anime wasn’t your favorite. The next volume of the series also includes something nifty that was missing from the anime.

ANNA: More volumes of Sailor Moon are always a thing to celebrate!

SEAN: There you go, that’s plenty of manga to chew over. What’ve you got?