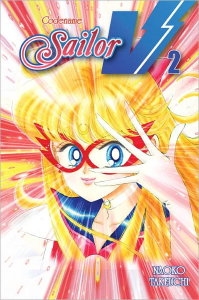 Oh, ho. What a difference a few months make. I had planned to review the second volume of Codename: Sailor V right after I reviewed the first. Then, Sailor Moon became more important to read and review, so Minako’s final solo mission was put to one side. Now that I’m officially taking a breather from Sailor Moon (it’ll be back later this month) and making time for other stuff, I want to get Sailor V out of the way first. Not that it’s a chore to read it—in many ways it is like its sister series in terms of execution—but the tone is different between the two leads.

In our last volume with Sailor Venus, a twofold structure is in place. One constitutes the bulk of the volume and is completely deceptive as to the volume’s true intentions. The other is examined near the end of the book and sets up the story to be continued on a grander scale. To explain, we get Mina fighting crime and villains for the most part—and yes, whether it’s DeVleene with her evil fattening chocolates (shame on thee!) or the Atavistic family of Nyan-Nyan, Wan-Wan and Chu-Chu (some mothers do have them), she dishes out the smite most excellently. She takes all of this in stride, all the while whining and complaining to Artemis, her familiar, about everything. At the end of the DeVleene chapter, we get a glimpse of a character who will trigger the other plot restructuring, Phantom Ace. As the final chapters started, I had no idea that Takeuchi would pull the rug from under me and ramp up some drama and heartstrings being pulled. She hadn’t done it for the whole of the other volume, so I wasn’t paying attention. When she showed Phantom Ace looking like Tuxedo Mask, I should have known what she was up to.

In many ways, I wish that Sailor V had been like this from the beginning, with some kind of gravitas to anchor the story. But then I remember that before Venus (spoilers) joins the rest of the Sailor Senshi in Sailor Moon, the girls treat Sailor V as a hero and a very serious character. So without having the Sailor V series be goofy by default, it would have been weird for Takeuchi NOT to portray Venus as a goofball to begin with and then, as she matures, the serious girl that she is. Plus when the aforementioned serious arc starts in Sailor V, all of Mina’s notions about what exactly she is destined for change for the better, but not without a bittersweet cruelty to proceedings. Mina HAS to have these challenges or what does she want to fight for? Certainly not for boys or fame, both of which she chased and lost and laughed off—but only at the end of her journey does she see how far she’s come.

This made me ask the question, to myself at least, what is the heroine/hero in a story of destiny? Is she the instrument of destiny or the catalyst of destiny? Where does her free will stop and the path of the “chosen one” come into play? If Mina had not found Artemis that day, would Artemis have sought her out anyway? If the Boss (whom we never meet at all, strange that) had not pushed Artemis to accept Mina despite her spacey moments and her reckless attitude, would Mina have succeeded? I suspect that that Mina would have become a Sailor Senshi anyway, but her journey would have been longer. She has all the talents to be one; all she needed was to accept her destiny. In the end, though, she has to make the decision to accept it. This brings me to the destiny that is revealed to her at the end. It’s not as bad a destiny as some shoujo heroines get saddled with. Certainly it sets her up for the awesome nature of being a Sailor Guardian. But still, the mantle of responsibility has a downside.

Artwork-wise, I find that Takeuchi has clean lines and excellent design work especially when she has Mina transform into whatever disguise she needs to use and with the costumes the villains wear. Things get a little busy in the crowds scenes and yes, I still have difficulty following some of the action, but it’s more manageable than in Sailor Moon. The translations by William Flanagan are excellent and he gives us a healthy dose of reference notes at the end of the book. I’m really spoiled by the level of the work.

In the end, I would say that in order to get a complete picture of the whole Sailor Moon manga experience, Codename: Sailor V is required reading. It sets up parts of the story that the reader will recognize from the main series. It also provides a fully detailed origin story for a team member other than Usagi. Not that Usagi’s origin is more or less important than Mina’s. But this is Mina’s story, full stop. You don’t need to read it to enjoy Sailor Moon—the other saga being self contained. But this is a nice arc for a character who starts out as slightly ditzy and a klutz but who takes on the whole ball of wax in regards to knowing what her path looks like and what it will take to walk it. It’s definitely not what it appeared to be in its first volume and it is a rare thing indeed for me to find a manga where I kinda liked the main character but totally got them after only two volumes. Still, however serious the last parts become, the title remains fun until the end. Mina makes me laugh as she commits crimes against basic logic and sense. As I sit reading while my family and friends talk or move around me, Mina’s silliness lets me forget my troubles for awhile. I laugh at Mina, reply to a question someone in the room asked me, and then go back eagerly to see what Mina’s going to do next. My advice: buy the two volumes, have fun and go from there.