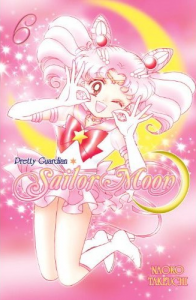 A curious thing happened to me the other night. After reading the sixth volume of Sailor Moon, I looked back over the earlier volumes of the series, and I came to the inescapable conclusion that the Sailor Senshi could be confused with a murderous vigilante gang. Now, before you laugh, let me explain it this way. In this volume, the girls find themselves tangling with the Mugen Group and their master, Pharaoh 90. The entire clan of bad guys all live in an evil-looking tower and seem to be happy drawing in unsuspecting minions rather than going out to destroy. Oh, and no, I’m not kidding about the evil tower part, several characters mention the fact that they get a weird feeling just looking at it. Therefore it becomes evil, the Trashheap has spoken on the matter.

As I was saying, the Mugen group are turning their students into monsters with the aid of some questionable science, at best, and then said monsters go on a rampage. The Senshi turn up and vaporize the bad guy and everything’s all right with the world. But if you viewed it another way, the Senshi have been going around destroying public property, causing mass panics and riots to break out, and killing any God’s amount of singers/idols/famous people because they were in league with that month’s chief villain. Isn’t anyone going to notice they’re, I dunno, dead? Or that there seems to be an abnormal amount of incidents around this particular part of Tokyo? Don’t get me wrong, I’m as OK with suspension of disbelief as the next person but does Takeuchi expect us to believe that nobody has noticed anything, at all? One of these days, I’ll get an answer, I just don’t think it’ll come from Sailor Moon. Not that I mind, because in this volume, we are introduced to Sailors Neptune and Uranus, two of the more interesting Senshi. I only know of these two by internet reputation so in that respect, I’m kind of trying to walk around spoiler territory for myself here. Haruka (Uranus) is interesting in that she is presented as a girl and a fella. There’s no ambiguity with her/him when they interact with other people. Strangely, the only person who is confused and states that she is confused is Usagi but that’s because Uranus kisses her in her male persona. There’s something familiar about Haruka to Usagi and it upsets her to think about it. Curiouser and curiouser. Michiru as Neptune is not as exciting but she definitely is more mysterious. I think because of her lower profile, I worry that Takeuchi will give all the revelations to Uranus, and that would be not so good.

Also, we are introduced to Hotaru Tomoe, a person whom I’ve heard about but know nothing about. Hotaru is a sick young girl whose father works for the Mugen group in their laboratory. He’s kind of like the Josef Mengele of the Mugen group insofar that nobody he knows specifically is being hurt by what he’s doing. In the meantime, eh, what do a couple of students matter? How do people like Professor Tomoe get college educations? Does nobody notice when his report cards read “COULD WORK HARDER. COULD APPLY HIMSELF. COULD BE LESS EVIL.”? Whatever his problem, Hotaru looks like she needs a friend, and she gets one in the form of Chibi-Usa. After stumbling into her in front of the Tomoe lab, Chibi-Usa decides to hang out with her. Is this going to end well? I don’t know but I’m happy that Takeuchi has decided to give Chiba-Usa something to do other than hang out with Usagi and Mamoru and monopolise their time together.

One of the wildest moments for me in this volume is the amount of bad guys who get vapourised by the Senshi. Sweet Christmas, they get enough time to say things like (and I’m paraphrasing here) “Sailor Mars! Sailor Jupiter! You won’t stop me or my master, Pharaoh 90! I’ll defeat-AARGGGHHHH!!!” before being turned into crispy critters. They even have their power levels displayed above their heads at one point and I was thinking going from head to head, “One round, one round, two round, end of level boss.” I am telling you, reading manga shouldn’t be this much fun. Every time a new villain is introduced to the series, I keep thinking of Col. Trautman saying to the Sheriff in Rambo that if he (the Sheriff) wants to send that many men to deal with the problem to not forget a supply of body bags. It’s almost like there’s no reason to give any credence to these lieutenants, they are literally not going to be in the book long enough to like or hate. Their job is to advance the plot or the characters or both. I’m not disparaging the practice, I’m just saying that you should be aware going into the series.

William Flanagan’s translation notes return in full and as always they are fun but not exhaustive. Things like naming structures and meanings of places and things always help me whenever I read manga so I was missing them in the previous volume. Kodansha continues to put out an excellent book with it being just the right size for me when I’m trying to find my groove at home (I would never read Sailor Moon out on the streets of Dublin. I value my life more!)

We are just around the halfway point in the manga and yes, we have a new villain who is in the Bwa-Ha-Ha mode again but this time, we don’t know if the new Senshi are friend or foe. This complicates matters and makes for an interesting interlude