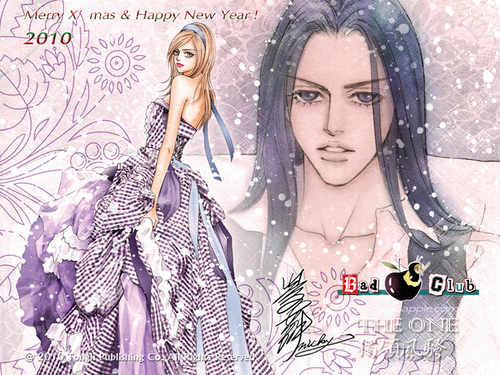 I have a recipe for you.

1/2 cup of Paradise Kiss by Ai Yazawa
1/2 cup of a BL comic (the more cliched and/or melodramatic, the better)
1/2 cup of Mars by Fuyumi Soryo
1 cup of a shoujo manga so trashy you are a little embarrassed to admit that you like it
1 tablespoon of Taiwanese culture

1. Put all ingredients in a food processor.
2. Set the machine to “Chinese language”
3. Blend thoroughly.

Voila! You have The One, a manhua by Nicky Lee.

I think there isn’t much point to trying to describe the plot, since it’s mostly ridiculous, but I’ll try anyway.

Lele’s parents were both fashion models, but they died when she was young, so she was raised by her grandmother and aunt. Her aunt, a modeling agent, is keen to get Lele into the business as soon as she is old enough, but Lele hates the idea of becoming a model. Then she sees photos featuring Angus Lanson, the Chinese-European-American model who is taking the world by storm. Lele then recognizes that modeling can be an art form. Oh, and Angus has a twin brother, Eros Lanson (you read that right, his name is “Eros”).

I don’t think that’s enough to convey the true ridiculousness of the story, so here’s what happened in volume 14 (spoiler warning). Another model, Feidna, had taken Lele’s place in the modeling world to get revenge for Lele taking Eros from her. Eros says he will break up with Lele if she doesn’t take her place in the modeling world back, so Lele goes to Paris. In order to get back her position. she has to work with a very feminine male model, and she has to become very masculine in order to accompany him. Oh, and they have to spend a couple of weeks together as “girlfriend and boyfriend” (he is the girlfriend, she is the boyfriend).

Nicky Lee has been making manhua for about 20 years. Aside from The One, her best-known work is Youth Gone Wild, which is 14 volumes long.

The Surfacing of Taiwanese Culture

Also, though I can’t find it right now, there’s a reference to how scary Taiwan is due to all the stray dogs (something that is also noted in Pinoy Sunday). It is true that Taiwan has lots of stray dogs, and they used to scare me a lot before I got used to them. Supposedly the only place with even more stray dogs is Thailand (at least, that seems to be the only place with more complaints about stray dogs than Taiwan).

There are enough Taiwanisms in this manhua that I don’t think anyone who hadn’t lived in Taiwan could have written it.

And I don’t think it’s a coincidence that a manhua with a bunch of subtle Taiwanisms is also one of the best-selling manhua in Taiwan. In the Taiwan market, being able to feature Taiwanese culture is one of the clearest advantages local manhua artists have over Japanese artists.

I think Nicky Lee has read something by Ai Yazawa. 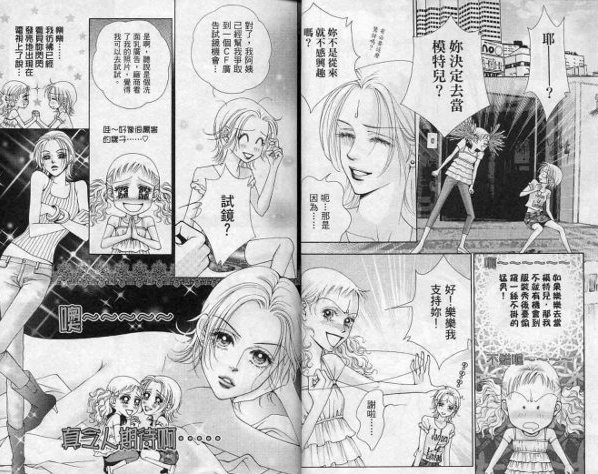 However, the Ai Yazawa influence is most apparent in the early volumes, and less apparent later on. In fact, in the most recent volumes, the Fuyumi Soryo influence is much more apparent, at least to me. 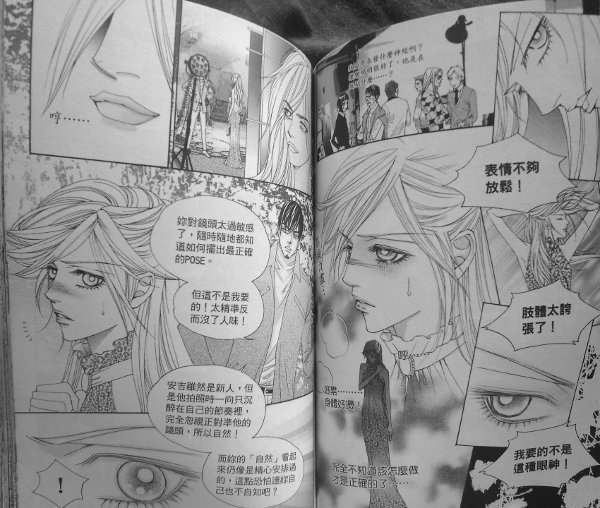 Some pages from volume 14, the most recent volume

My favorite parts, art-wise, are the cinematic sections without dialogue. They really show that Nicky Lee can tell a story visually. For example, there is a beautiful sequence (which, due to technical difficulties, I cannot get pictures of – sorry!) in which Lele leaves Eros. In the rain. In the heart of New York City. And not a word is said. Both the composition and the way the characters’ expressions are drawn in that scene are exquisite.

The way queerness is depicted in this story is a mixed bag.

On the one hand, there are queer characters. And, unlike some BL, homosexual identity is acknowledged – some characters actually do identify as gay.

On the other hand, pansexual/bisexual identity is NOT acknowledged. There are some characters who, to me, are clearly behaving in a bisexual/pansexual way … but nobody identifies as pansexual or bisexual. Instead, they are straight, or gay, or a gay going straight, or a straight going gay. Argh.

One of my favorite characters, Leo, actually identifies as gay. He is a bit of a stereotypical gay man … on the other hand he is also black (in my experience of mainstream American media, the vast majority of gay men depicted are white). He is also one of the most likeable characters in the entire story.

What bugs me most, however, is a story arc in which a woman woos away a man from his boyfriend. As far as I could tell, these two guys were not in an open relationship, therefore I think trying to woo one of them away is, at best, extremely questionable behavior. But Nicky Lee tells the story as if there is nothing questionable about this. I cannot imagine Nicky Lee telling this story the same way if the relationship involved were a heterosexual one. The only explanation I can think of is that Nicky Lee thinks that homosexual relationships are not as worthy of respect as heterosexual ones. And I strongly disagree with that.

My Take on the Story

I think the story is too ridiculous to take seriously. Okay, occasionally I can take it seriously but … not often.

Nonetheless, I have read all 14 volumes, and I enjoyed it. What gives?

Well, first of all, the story is not boring. The breezy style keeps things moving along.

In spite of all the cliches, I don’t know what is going to happen next, because the cliches are deployed in an unpredictable way.

The Lanson twins—they are so over the top it’s funny. For example (spoiler warning), in order to rescue Eros, who basically being kept prisoner by their father in Europe, Angus sells himself to another male model, agreeing to be his sex slave for two years. Months later the male model complains that Angus hasn’t given himself to him, and Angus answers that he’s fulfilled his every request and had lots of sex with him, and the male model replies that what he really wants is Angus’ heart. Just thinking about that arc makes me giggle.

And, as someone who has read more than a few shoujo manga, I am actually impressed by Nicky Lee’s ability to use so many melodramatic shoujo/BL tropes while keeping the story comprehensible.

This manhua has never been licensed in English, or any other European language.

Since I figured the most popular Taiwanese manhua aimed at a female audience couldn’t be the worst place to start, this was actually the first manhua I ever read. So it will always have some nostalgic value for me.

I think it’s a pity it hasn’t been licensed in English because, even though it’s not a masterpiece, I think hard-core shoujo fans might appreciate something like this. It’s strangely appealing in its own way.

Sara K. is going to be quite busy in the next month, so her posts might become fluffier than usual (though the next post will definitely not be fluffy). Nonetheless, she hope readers will enjoy them.