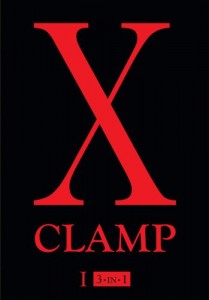 CLAMP might be the first manga artists I became aware of back in the day. While Sailor Moon and its risable dub didn’t interest me, the dubbed version of Cardcaptor Sakura, or Cardcaptors as it was known, was interesting. Knowledge that was based on a Japanese manga sent me to the old MIXX edition of the book. So I knew they existed. A few years go by and I own smatterings of Legal Drug, xxxHolic, Tsubasa Chronicle, Magic Knight Rayearth and a few others. But strangely, it was the discovery of an anime version of one of CLAMP’s bigger properties that would start over ten years of frustration. The title? X.

X tells the story of Kamui, a young high school-going boy who returns to Tokyo after the violent death of his mother. Childhood friends, Fuma and Kotori, are of course delighted to see him again. However, things cannot be as they once were. Kamui seems to be pursued by people who want to possess him and his psychic powers. One one side, Princess Hinoto who only wants Kamui for noble purposes and on the other, Kanoe, her sister, who only wants Kamui for destructive reasons. Every physical conflict in the story is settled by psychic battles that take place inside barriers. No battle can damage the real world while it happens inside the barrier but once a combatant dies, the damage becomes real. Now the countdown is on to 1999 and the day of reckoning.

Wow, CLAMP’s serious stuff always reads like a 70’s disaster movie starring Cary Grant and Ava Gardner. It sounds goofy as anything but once into the nuts and bolts, it really has legs to run with. X, I’ve known about since watching the Rintaro-directed movie from the mid-90’s. And of course, the TV series from Yoshiaki Kawajiri, I’ve not seen but heard about. But you see, the most famous thing about one of CLAMP’s biggest titles is that it was never finished. The team just stopped working on it (for particulars, see the Wikpedia article on it) and have never gone back to it. I guess being successful means you don’t have to be consistent. The movie and the TV show had to craft their own endings so your milage will seriously vary. But the manga is good, I have to say. After reading about the books for a while, I picked up the VIZ omnibus edition of volume 1. I’ll try not to spoil the other versions too much for you.

Kamui might be the most annoying CLAMP creation I’ve seen. He’s the lead, the hero, the chosen one—but by God, he’s so confident in his own abilities, it borders on arrogance. He fights anyone at the drop of a pin, which since he’s a psychic warrior, means the bar repair bill is going to be high. He’s angry, moody and pushy. He’s haunted by his last night in Tokyo before he and his mother had to flee. It’s so hard to see into his character in this volume. I get the sense that the manga version of Kamui cares about his childhood friends and normal people but psychic fighters, he couldn’t care less about, like they are fair game since he’s the king of the junkyard dogs. This is inconsistent with his promise to his mother to live long enough to see the year 1999. He’s fighting anybody without regard for his safety. What does this mean? The authors aren’t saying. Kotori is a typical non-leading female character from CLAMP in that she’s a frail, fragile girl who just wishes, darn it, can’t we all just get along? She clearly has fuzzy feelings for Kamui but he’s shutting her out to protect her. Fuma, well, is a nice guy who loves his sister Kotori and tries to shield her from the childhood trauma of finding their mother butchered, together. He loves his friend Kamui and would never hurt him but he’s being pushed to choose whom to protect. I’m not talking about the rest of the characters because you should find out yourself.

I like the set up of this first volume. You get a sense that something is coming from Hinoto’s apocalyptic visions to the way in which Kanoe is moving and maneuvering her own players. Kamui knows, just knows, something bad is after him and he tries shutting out Fuma and Kotori to protect both of them from whatever it is that pursues him. There are unintended fights between him and Hinoto’s people but the real fight is yet to happen. Another thing is, and this is one of CLAMP’s major strengths, that all the cast get a chance to explain themselves to the audience, and in doing so engage in exposition. It’s a really interesting technique to observe. If anyone else did it, I’d roll my eyes but CLAMP always make it seem natural. Even the antagonists get a chance to do this. It’s doesn’t make them any nicer people but at least I understand their motivations a bit better now. Finally, there seems to be a conscious choice to set the fights during the night. Nothing bad really happens in the day and in this volume the daytime is associated with Kamui’s arrival in school, and public, for the first time when he arrives in Kotori’s field of vision out of a school window as if heaven sent. Interesting concept, since later in the day, Kamui tries to coldy dismiss Kotori (of course we know he’s trying to protect her). Dining on ashes at the end of the day, before the eternal night, perhaps?

Talking about a CLAMP book means talking about artwork and this work benefits from VIZ selecting a larger format book size. Every ink brush stroke, every pencil line is detailed and prominent, every character is clear. The work in here has an almost dream-like quality with long elegant lines and weird tilted camera angles. CLAMP aren’t really urban or technological artists, but when they do decide to do that type of work, it’s always refreshing to see it on display. Trying to pin down their technology style is a bit difficult. It’s one part Shirow Masamune, one part Michael Okuda, how’s that? And the character designs are, as always, varied and function oriented. Everyone looks like what they wear suits them.

I have never liked the anime ending to the X movie. But while I’m resigned to the fact that CLAMP might never finish their popular series, at least it looks good, is written smartly and has enough steam to see me through to X Omnibus vol.2. For newcomers to CLAMP, it’s a good place to start and a good book to own. For veterans, well. You’re already trapped in the hole, so keep going, huh?