Hi everyone. This is a new column on comics, novels, TV shows, films, and who knows what else from the Chinese-speaking world. As a resident of Taiwan, I’m going to put a disproportionate emphasis on Ilha Formosa, but I’m not going to restrict myself to it. For this first post, I am looking at a Taiwanese idol drama: The Outsiders. 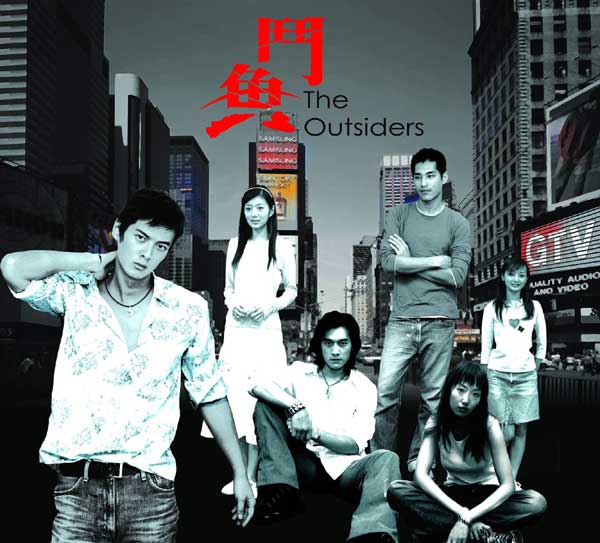 Even though The Outsiders is not based on the S.E. Hinton novel, like the novel, it is a story of gang youth getting into more trouble than they bargained for.

Three orphans, Ah Hao, Shanzi, and Ah Qi, are sworn brothers and have taken care of each other (with the guidance of a sympathetic police officer) since they were children. Ah Hao and another student at their senior high school, Xiao Yanzi, fall in love with each other. The problem is that Ah Hao, along with his sworn brothers, are poor and “delinquent,” whereas Xiao Yanzi is a sheltered piano student from a nice upper-middle-class family.

Things go downhill from there. Hong Dou, a tough girl with a crush on Ah Hao, threatens violence if Xiao Yanzi gets too close to him. Xiao Yanzi’s parents do not approve of Ah Hao, and put a lot of effort into keeping them apart. Shanzi eventually also finds himself in love with Xiao Yanzi. And we’re not even halfway through the plot.

Ah Hao is unusual in that he is a male lead in an idol drama who is poor. For real. He’s not secretly the son of the CEO of some large corporation or otherwise high-ranking man. Even male leads who are merely upper-middle class are not too common in idol dramas. But this is not the only way in which The Outsiders is an atypical idol drama.

In most idol dramas, the main couple runs into a problem and they overcome it and become closer, then there’s a bigger problem and they overcome that and become even closer, and so forth. At first, it looks like The Outsiders is following the same pattern—Ah Hao and Xiao Yanzi run into problems and deal with them. But instead of gaining strength, resilience, and confidence, the very opposite happens. They bond with each other and their faith in themselves becomes more and more precarious. It eventually dawns on the viewer that this might not end well.

So, is The Outsiders a tragedy, or is this a setup for a grand climatic recovery where Ah Hao and Xiao Yanzi’s love for each other conquer all? The answer to that question, of course, is a spoiler. But regardless of the outcome, the mere fact that The Outsiders goes so far into dark territory makes it stand out from other idol dramas.

The actor who stands out the most, to me, is Ady An as Xiao Yanzi. It’s not because of her acting—though I think her acting is alright in this drama—it’s her looks. It’s not so much that she is pretty (she is, of course, pretty) as that she is blessed with looks which light up on camera. She is also blessed with the best role. Out of all of the characters in the drama, it is Xiao Yanzi who grows and changes the most. Come to think of it, her acting in this drama actually is pretty good since I found Xiao Yanzi’s character change convincing.

The actor who I admire the most based on ability is Xie Chengjun as Ah Bao, the main villain. Ah Bao’s dialogue is more like the way TV villains talk than real people, and his sidekick, Laoshu, is quite irritating because of the writing. However, Xie Chengjun managed to make Ah Bao a bit more like a human being with his performance. He sometimes downplays the role, making Ah Bao seem all the more chilling, while punctuating his performance with violent bursts of energy. I think the intensity and believability Xie Chenghun brings to the role saves the character from mediocre writing.

The acting in The Outsiders does not excel as much as the acting in, say, Mars. Still, I think most of the actors generally perform adequately.

Considering that one of the main characters is a piano student, it should no come as no surprise that music is an important part of this drama. In fact, The Outsiders has the most eclectic selection of music of any idol drama I’ve seen. Naturally, there are many piano pieces throughout the show, well-chosen to contribute to the atmosphere of the drama. Furthermore, the drama includes a Tsai Chin song (Tsai Chin was a very popular Taiwanese singer in the 1980s). I am not a Tsai Chin fan, but I appreciate that the song fits the mood, and I appreciate that they decided to include some older pop music.

The best known song in this drama is most likely the ending song, “Lydia.” It is a song by FIR, one of Taiwan’s most popular pop bands. You can hear what kind of song it is in the first few seconds, where the opening strings are joined by an underlying rock beat. The song breathlessly ascends in pitch … at least the lyrics seem breathless due to the creative use of Mandarin. For example, here’s a part of the lyrics:

He left (you still) bear, not having left, your own heaven
After the wind-drying there can remain rainbow tear light

The song fits the story, as it expresses passion rising, without pause, pushed by a strong beat, just as Xiao Yanzi and Ah Hao are pushed forward at a pace faster than they can handle.

I really like the violence in The Outsiders. Yes, romance comes before action, but the action is still pretty good. First of all, I like the free, raw, unrestrained energy. It really feels like violence. One reviewer claimed that the fights were not choreographed. As someone who knows a few things about fight choreography, I know the fights actually are choreographed, but they feel like they are not. I also like the atmosphere—broken windows, dark alleys, abandoned buildings. The best thing, of course, is that the characters are vulnerable. Many action flicks forget to include the vulnerability. The fighting in The Outsiders is short and to the point, but a short fight in which Xiao Yanzi (the piano student) gets hit by a baton makes a deeper impression on the viewer than 30 minutes of inconclusive fighting by invincible heroes.

If you want to get a feel for the fighting, watch the opening to Outsiders 2 – it shows quite a bit of fighting.

And, of course, people who cannot watch brutal violence on screen should avoid this drama.

In a way, the constraints are good, because they forced the writers to be more subtle about how they handled the characters. Considering the constraints in place, I am impressed that the main characters had as much development in The Outsiders 2 as they do. Nonetheless, Outsiders 2 does not manage to have the resonance of the first drama.

Huīsè Kōngjiān (“Gray Space”) is one of my favorite idol drama theme songs. It’s the song I linked to in the “Fighting” section. It is not so much the song itself as the way it fits the clips chosen for the opening and the way it fits the overall atmosphere of The Outsiders. The ending song, Nǐ Shuō (“You Say”), is also lovely. Whereas “Lydia” is the more popular song, I like that these two songs are quieter and feel more melancholy.

For all its flaws, The Outsiders is one of the most memorable idol dramas I have seen. I think what makes it stick out more than anything else is that it has some truth. I am not saying that it is realistic—it is most certainly not—and I’m not saying all of it is true (the villains in particular are not true to life). But there is enough truth to make an impression.

First of all, The Outsiders is almost entirely filmed in humble, ordinary neighborhoods (even the neighborhood of Xiao Yanzi’s faimly feels very ordinary). Many idol dramas are set in posh houses or tourist destinations. That’s not a bad thing—I have a lot of fun trying to identify locations—but it reflects fantasy, not the way most people in Taiwan live.

Most idol dramas are a retelling of Cinderella—humble girl gets swept up by wealthy guy and he takes care of her problems. However, most women, Taiwanese or not, are not going to get swept up by princes, let alone have their problems solved by them. This does not stop Ah Hao from trying to be Xiao Yanzi’s prince.

And that is the core conflict in their relationship. Ah Hao wants to be Xiao Yanzi’s prince, but Xiao Yanzi wants to be his partner. Their relationship gets even more strained when it becomes apparent that Shanzi wishes to be Xiao Yanzi’s partner, and a girl who really wants Ah Hao to be her prince appears. This is a problem that happens in real life, and it is this aspect of the story which stays with me the most.

Unfortunately, it is not possible to legally watch The Outsiders with English subtitles. Somebody ought to license this drama.

Next time: The Book and the Sword (novel)

Sara K. is not sure whether or not she will be able to make witty remarks about her life every week, but she will try. Since she is recovering from a cold, she certainly does not feel very witty right now.