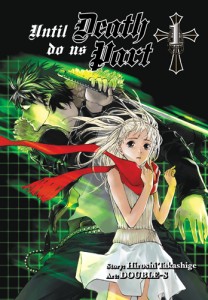 Until Death Do Us Part is a slickly packaged compendium of action movie tropes that reads like a story. That’s not to say it’s bad — it isn’t — but to warn you that you may experience a powerful sense of deja-vu as you thumb through its numerous shoot-outs, explosions, and speeches about terrorism.

The opening pages plunge us directly into the action: a solemn pre-teen girl leaps from a speeding car, accosts a blind man, and begs him to help her, promising him jewels and money in return for his assistance. That man, Mamorou, proves surprisingly adept at dispatching bad guys; he’s a modern-day Zaitoichi, using a pair of special goggles and a fine-edged sword to disarm Haruka’s captors, a group of thugs in the employ of the Ex Solid Corporation. (Which begs the question: how does such an ill-named company stay in business? But I digress.) Haruka’s ability to pick Mamorou from a crowd of thousands is no accident; like the pre-cogs in Minority Report, she has an uncanny ability to predict the future. For several years, she used that power to enrich her family — mostly by playing scratch tickets — but now she finds herself running from several powerful organizations, each of whom sees her precognition as a tool for advancing their own interests.

Whether Until Death‘s similarities to The Professional, Mission: Impossible, Minority Report, and the entire oeuvre of Jason Statham are intentional is difficult to say; some of the plots skirt the line between theft and homage. Mamorou’s fellow crime fighters, in particular, seem like IMF recruits, as they’re armed to the teeth with the latest spy technology and weaponry — an incredible feat for an off-the-the-grid vigilante organization with no ties to the government or the mob. (Just in case we don’t fully appreciate how awesome this weaponry is, there are several scientists on hand to explain in excruciating detail how they work.) The sheer abundance of borrowed characters and story lines, however, work in Death‘s favor, with no single borrowing overpowering the resulting fusion of sensibilities.

Like many action manga, the artwork tacks between static scenes of talking heads — usually imparting some key points of information about a bad guy’s history, or describing a hypothetical technology — and kinetic scenes of bone-crunching violence. Though the fights aren’t as inventively staged as a John Woo shoot-out, DOUBLE-S wins points for carefully delineating the space in which the gun battles unfold; the reader is conscious of how walls, objects, and sight lines influence the outcome of those battles. DOUBLE-S is overly enamored of slo-mo bullets — a visual gimmick so overused in the last fifteen years it’s become a parodic gesture — but he uses it to good effect, demonstrating how swiftly Mamorou moves, and how precisely his blade slices through solid objects: 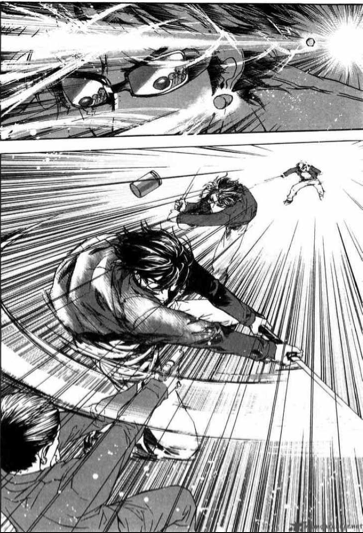 DOUBLE-S has several other nifty tricks up his sleeve as well. In one of the manga’s recurring visual gambits, DOUBLE-S shows us how Mamorou perceives his environment through his special goggles: 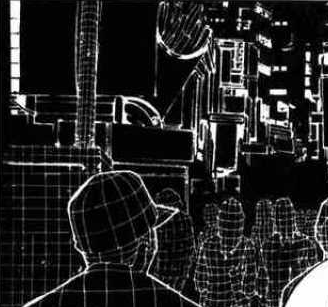 A Tokyo street as viewed through Mamorou's goggles.

Though the characters are recognizable in their computer-enhanced form, they have a spectral quality to them; if anything, they resemble echoes or after-images, rather than corporeal entities. The artist’s quick cuts between Mamorou’s perspective and ours neatly underscores how much Mamorou must rely on his other senses to give these incomplete forms flesh and blood: how else could he be so devastating, given the limitations of his goggles?

Perhaps the best compliment I could give Death‘s creators is to note the skill with which it recycles familiar action-movie conventions. We’ve seen Death‘s characters and plots and scientifically implausible weapons in other stories, but Hiroshi Takashige and DOUBLE-S stitch them together in such a fashion that the seamwork is almost invisible. The resulting manga isn’t original, exactly, but it has enough style and integrity to engage the reader’s interest, making it an agreeable beach or airplane companion.