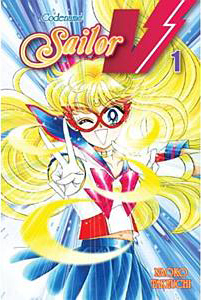 “Champion of Justice! The Pretty Guardian in a Sailor Suit! Sailor Venus has arrived!!”

Did you ever have that dream with the sensation that you’re falling, but you’re just not sure in which direction, and yet you’re perfectly safe doing so? The is the feeling I get from Codename: Sailor V, coupled with a curious feeling that I’m being led somewhere familiar, yet I’ve never been there. After diving into Pretty Guardian Sailor Moon, I also picked up Codename: Sailor V as well, as I had heard it was a prequel to Sailor Moon. But while it was published at roughly the same time as Sailor Moon and it IS set in the same universe, tonally, this is a different tempo.

First of all, while it does have a girl becoming a magical champion of justice, the difference here is that Minako Aino is on her own. She has a familiar (a male cat named Artemis) and she answers to someone called “Boss.” However, there is no team to help her, so Mina must face all the agents of evil alone. In many ways, that makes this first outing both flat and exciting. It’s flat because if you didn’t like the formula of “Girl gains magical powers, fights a villain every chapter, overcomes and adapts, then triumphs” espoused by Sailor Moon, this is more of the same. So we are there for all the blundering Mina does, every goofy joke, every stock bad guy, and every cliché. While this might be bad for some, I’m glad of it, as it means I don’t have to keep remembering every chapter and can focus on the narrative (Confession: as I recently came into Sailor Moon, a lot of characters’ names and faces didn’t stick right away, thus I have to keep rereading to imprint the important stuff).

Secondly, I don’t get a sense of an impending apocalypse with Codename: Sailor V that I got with Sailor Moon. In that, there’s a goal: finding the princess, finding the crystal. In Codename: Sailor V, there are the main villains (the Dark Agency) but we don’t know what they want, save to take over the world. And while we know the agency is being controlled by a higher intelligence, we’re just not told who that is. This fog is either Takeuchi being sly or she really doesn’t know what she’s doing. Now, I could buy that last point except both Sailor Moon and Codename: Sailor V were published at around the same time. I’d like to know what the frequency of the chapters for both were, but I don’t have that information. Since there are only two volumes of Codename: Sailor V and there are twelve plus volumes of Sailor Moon, I am curious to say the least.

Using Sailor Moon as a guide, while there are much the same types of characters, as there’s not such a large cast, I can focus on the them better. Mina’s relationship with Artemis is much more antagonistic than Usagi’s and Luna’s, but this is borne for the most part out of the fact that Mina is a complete slacker who does well in athletics but is poor at academics. Even her mother can’t stand the fact that she bunks off her responsibilities whenever she feels like it! Equally her friends, including her bezzie mate Hikaru, just roll with it. Though the background characters in this are so-so, I do like the police Inspector General who is in love with “V-Chan,” as she keeps calling her. If I had a gripe, it would be that the villains get whipped senseless in this. Unlike Sailor Moon, here the villains just turn up, take over and then get belted by Sailor V, who usually gets shoujo-medieval on their rump. Full marks every time Mina turns them into crispy critters.

Mina is even more of a girly-girl (is there such a thing, really?) than Usagi. She has all the problems that go with being a pubescent, amplified due to her identity as Sailor V. She wants her first love, first kiss, first crush, first holiday, and so on to be just so. But sometimes, I feel that she could do with someone like Tuxedo Mask in her life. Tuxedo gives Sailor Moon something to look forward to as a goal. And Mamoru gives Usagi’s heart a fluttery feeling whenever he’s around. Mina has no such person in her life. It would be interesting to see what she would do if such was the case. But that doesn’t detract from her character—far from it. It makes me wonder if she’s holding back her potential because she doesn’t seem to feel the same peril that Usagi and Co. get into. Would this make her a more flawed character, and therefore more sympathetic to us? Maybe, but I have a hunch that there’s enough of this coming down the pipeline for Sailor Moon, and if it happened to Mina in the same way, I would feel a cloning issue arise.

Artwork-wise, Takeuchi gives her characters an energy that is hard to define. If I had to place a finger on it, I would say they look alive in the sense that they are animated, lively and effervescent. Mina has a smile that goes through different stages. Her carefree one (used mostly for her friends), her dreamy one when she’s thinking about a boy, and finally her smile that only the readers get to see. This is a special kind of smile—one that shows the confidence of someone who could, literally, move mountains if she tried. The smile I refer to is the one she wears when she defends the characters and us, the audience, from all the nasties in the world, whether it be a sexist git who doesn’t want girls in his electronic man-cave or the Iago-like Dark Agency who would steal our lifeforce energy for its own nefarious uses. This smile will protect anyone or anything standing behind it. This smile would die rather than admit defeat. It’s amazing how much enjoyment you can derive from a smile. Maybe I’ve uncovered another of Takeuchi’s talents? Or is it one of Sailor Venus’?

Translation-wise, William Flanagan keeps it quick, coherent and easy to read. I’ve never read any scanlations or the first TOKYOPOP versions, so I will withdraw from speaking as to their accuracy. All I will say is Mr. Flanagan has a lot of text to deal with and manages to make sense of it and put it into a kind of literary tempo. He and Kodansha have their usual liner notes at the back of the book. Thanks are extended for the explanations.

As an aside, since I keep bringing up Sailor Moon in this review, I’ve got one or two wee problems. You see, in Codename: Sailor V, Mina runs by—is drawn running by or whatever—next to Usagi and Ami, leading us to believe that the events of Sailor Moon can’t be far behind. My confusion is that I don’t know within what time frame this story takes place. Is it at the same time as Sailor Moon? Before or after it? This perplexes me and I can only hope there’s some clarification soon. Another thing I’ve noticed is that the characters that Mina is friends with don’t get nearly enough time to develop on their own. I realise that Mina is the focus, but still I can’t help feel that I’m running out of time to get to know them. Other than that, this is a great first volume, and if you are wary of getting into Sailor Moon because of its length, there are only two volumes of this, so you should be fine.

This last point is also a source of sadness for me. In this single volume I’ve grown to like Mina, Artemis and even the Inspector General and the fact that the next volume will be the last that focuses on these characters is an unhappy one for me. Don’t get me wrong, I know that Mina plays a part in Sailor Moon but still, I’m going to miss them. Oh well, one more volume to go, I suppose. But knowing Takeuchi-sensei, she’ll have them go out in a blast. Oh, I cannot wait!

On a personal note, I wanted to say thanks to everyone who emailed me or left comments on Manga Bookshelf in regards to the column. I really appreicate the thoughts and suggestions and while I can’t say I will pick up all the titles suggested, I enjoyed getting such an enthusiastic response. Also, I wanted to thank Melinda, Kate Dacey and all the people on their own blogs and on Twitter who mentioned the column.