Do you have what it takes to be crowned “King of Maids”?
Bits & Blips: Manga Bookshelf Edition

Tanto Cuore (Italian for “Much Heart”) is a deck building game originally released in Japan by Arclight Games with the English edition published by Japanime Games in the US. The players play the “masters of the house” and will employ maids and use their services to help them expand their mansion to ultimately win the game and become the “greatest master”, the proclaimed “King of Maids”. While I was admittedly uncertain that the theme was something that I would be interested in, after playing it I discovered that with only one minor exception the fan-service is minimal, the cards are tasteful, and on the surface the theme is rather innocent. But is it a good game? Yes!

Deck building games came into popularity with the creation of a game called “Dominion” by Donald X. Vaccarino in 2008. Since then, the genre has exploded with many other titles using this mechanism. Personally, I was not very fond of Dominion. There is little player interaction (although later expansions addressed this somewhat), the art is not particularly to my tastes, and the game play feels very mechanical and dry with few paths to victory. Tanto Cuore addresses all of these issues.

But first, a primer on the mechanics of a deck building game.

Deck building is something that players of collectible card games (CCG) and trading card games (TCG)—such as Magic, The Gathering and Pokémon—are very familiar with. However in a deck building game, constructing the deck is actually part of the game as opposed to the precursor to the game. Everyone starts out with the same cards in their deck; generally weaker cards that will be used to gain more powerful cards. Each turn you start with a hand of cards drawn from your deck, play some cards from your hand, perform actions based on what you play, and then move the used and unused cards to your discard pile and draw a new hand of cards. Each player then repeats these steps in succession. 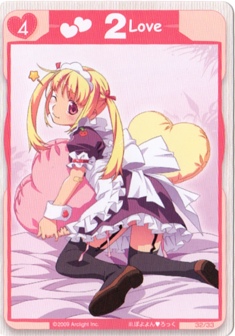 When you need to draw a card and your deck is depleted, you shuffle the discards. Thus, you know which cards are in your deck but not where they are or what order they will come up in. The strategy is building a deck that contains cards that will help you achieve your goal of getting victory points. If your deck gets too big, it might take you too long to get the cards you need and the chances of getting all of the ones you want in one draw get worse. Therefore, another important goal is getting the weaker cards out of your hand or upgrading them to better cards. The mechanisms for this vary by game, but in the end the idea is usually the same: build an efficient yet powerful deck that will yield you the most Victory Points (VP) at the end of the game.

In Tanto Cuore, there are three categories of cards available in the “town” (play area): Maid cards, Love cards, and Event cards. The Maid cards include maid chiefs, general maids, and private maids. The Love cards have a value of 1, 2, or 3 “love”. The Event cards include Bad Habit and Illness cards. Every player’s initial hand has 7 “1 love” cards and 3 “Colette” maid chief cards which do little but are worth 1 Victory Point (VP) at the end of the game. A turn is divided into four phases: the Starting phase, the Serving phase, the Employ phase, and the Dismiss phase.

On each turn, a player is allotted one “serving” (which means playing one maid card) and one “employ” (which means buying a new card with “love” cards). Certain cards you purchase may grant you additional bonuses, such as additional servings, additional employs, the ability to draw cards, or extra love. Some cards are also worth victory points simply for having them. It’s beyond the scope of this review to detail what all of the cards do, but learning how they interact with each other is crucial to winning the game. For example, playing a maid card that gives you +1 serving means that you’ll be able to play another maid card on this turn. If you chain several of these together you can do even more. Playing cards in the proper order to maximize their potential is therefore very important. 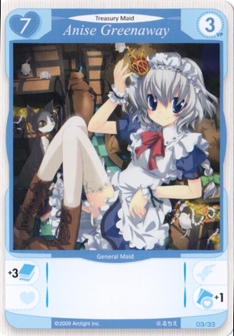 The private maids are special. They each have an ability that occurs during the start phase of your turn and are worth positive or negative VP. The deck has 10 unique private maids, two of which are visible at a given time and only one of which may be employed on your turn even if you have gained extra employment capabilities from other maids. These maids are placed in your “private quarters”. These are cards that are no longer in your deck but still count at the end of the game for scoring purposes. When you employ a private maid, you may place her in your private quarters or in the private quarters of one of your opponents. Each player may only have one active private maid at a time, so employing a new one will replace any previous one, eliminating that maid’s special ability (but not the VP—positive or negative, those will be scored at the end of the game).

The game comes with 16 different types of general maids. 10 of these will be selected for use in the game. There is a recommended starter setup in the manual for beginners, but you can choose the 10 maids to be used randomly, by a draft, or whatever way your group decides. In this way, the game will be different every time you play. You’ll have to adjust your strategy appropriately based on the cards that are (or aren’t) available.

Tanto Cuore offers alternate paths to victory which is one of the things I really like about the game. Purchasing the high end Chief Maid will earn you 6 VP and is a significant way to gain points. However, the private maids are worth varying amounts of VP and some of the general maids are as well. Also, some of the maids are “chamber maids”. These maids can moved to your private quarters by using one or two servings, depending on the maid. Doing this not only gets them out of your deck—which as you’ll remember from above can be quite useful—but there is also a “set collection” mechanic introduced in this game where having either a certain quantity or a certain variety of maids in your quarters will earn you extra points at the end of the game. This, however, leads me to the other method of player interaction in the game: Events. 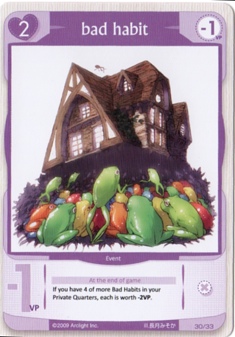 Illness cards may be played by your opponents on any of the maids in your private chamber. If a maid is still ill at the end of the game, she will be removed from play and her VPs will be lost. Also, she will not count in any of the sets she may have been a part of. Finally, if your private maid becomes ill, her special ability will not occur during your start phase. There are several ways to remove illness cards from your maids depending on the cards that are in play. Also, you can always choose to discard a “3 love” card to cure a maid, but this is a very painful choice since “3 love” cards cost 7 love to employ. Still, it might be worth it. Interestingly, you may also play an illness card on one of your own private maids if you don’t want the negative victory points or effects this maid has.

Finally, your maids may acquire “Bad Habits” from your opponents. Bad habits are worth -1 VP each at the end of the game unless you have four or more of them, in which case they are worth -2 VP each. Like illnesses, there are various ways to remove the Bad Habits from your private quarters.

The games ends when two of the maid piles have been depleted. Once this happens, the player who caused the game ending condition will finish her turn and the game is over. Sick maids are removed from the game and then victory points and bonuses are added up. Finally, the negative points for Bad Habits are applied. Whoever has the highest VP total is the “King of Maids”!

The cards in this game have extremely lovely artwork by 25 Japanese illustrators. Therefore, each card has a very unique look and style. While normally I would find this jarring in a game, I think it works very well here. In a way, it showcases the many different styles of drawing used in Japanese media. Who knew there were so many ways to draw a French maid?

My biggest concern was that the artwork was going to be too ecchi for me. While I don’t always have issues with ecchi, it’s not what I would be looking for in a game and it would make it difficult for me to introduce the game to my generally non-Otaku gaming group. Thankfully, most of the cards tend to be moe rather than ecchi. The maids all feel like real characters, even the more unusual ones like the “napping maid”. The love cards are a little suggestive and one of the private maids has a panty shot with a little more, ah, personal detail than I’d like, but I’ll give that a pass because the Esquine Forét card’s awesomeness totally makes up for it.

The recommended age on the box says 12 and up. I would say, like with anything, check it out first and then decide what’s best for your children.

Like all deck building games, if you randomly select your cards you could end up with a combination that doesn’t work very well together. Conceivably, everyone’s final score could be negative. Generally this is not going to happen but it is something to consider.

Also, illnesses and bad habits are relatively cheap to inflict on other players, but very expensive (or impossible) to remove if the right cards are not in play. I don’t see this being a big problem, but it could frustrate some players. This wasn’t an issue in any of the games I played, but I could envision scenarios where it would be.

The only downside to the artwork is that the text is extremely small. You’ll definitely need to get your reading glasses out for this game.

Finally, the price. At $50 MSRP, it’s fairly expensive for what amounts to a large deck of cards. However, the street price at online shops is around $40 and when you consider that unlike CCGs and TCGs there are no booster packs and “rares” to be chasing after and thus no secondary market price inflation, it’s still a pretty good deal. Everything you need to play is in the box.

Should you get this game? Yes! If you are fan of manga or anime (or a maid fetishist) and have not played games like this before, you might have a slightly steeper learning curve than your average hobby gamer but once you play through it a couple of times you should pick it up fairly easily. If you are a gamer and aren’t put off by the theme then I strongly suggest giving this game a try even if, like me, you aren’t a fan of Dominion. Tanto Cuore improves upon the core mechanics of a deck building game by adding alternate paths to victory and player interaction. The art is fantastic and the theme surprisingly works well even outside of Japan.

There are two expansions for the game which can be played alone or in addition to the cards in this game, but currently they are only available in Japan. The first expansion, Expanding the House, will be available from Japanime Games in early 2012.